The Turkey of 2013 and the Turkey of 2017 are very different places, which is why uttering the word “Kurdistan” is once again a punishable offense in the parliament. 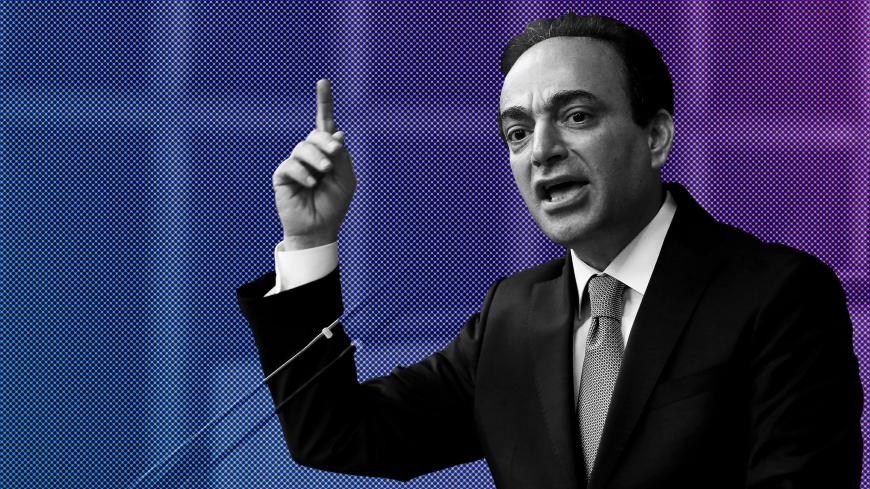 Osman Baydemir, spokesman for the Peoples' Democratic Party (HDP), addresses members of parliament from his party during a meeting at the Turkish parliament, Ankara, Turkey, April 18, 2017. - REUTERS/Umit Bektas

An interesting episode unfolded Dec. 13 in the Turkish parliament as Osman Baydemir, a deputy from the pro-Kurdish Peoples’ Democratic Party (HDP) representing the province of Sanliurfa, took the rostrum and began talking about his and his party's “mission.”

“I, as a Kurd, as a representative of Kurdistan,” he said at one point, “I believe I have a role, a mission to make this roof the common roof of the Turk and Kurd.” Baydemir could not continue much beyond that, as Deputy Speaker Aysenur Bahcekapili from the ruling Justice and Development Party (AKP) asked Baydemir to stop talking, muted his microphone, and then asked him, “Where is Kurdistan? There is no such region in Turkey.” Baydemir responded, “It is right here,” thumping the left side of his chest, over his heart.

Most of the deputies were not impressed with his response. A quick vote was taken, resulting in Baydemir being found guilty by the AKP and its new ally, the Nationalist Movement Party (MHP), of using the word “Kurdistan.” As punishment, Baydemir was banned from two parliamentary sessions and had his monthly salary cut by two-thirds. In defense of Baydemir, other HDP deputies reminded those present about someone else who had uttered the word “Kurdistan” from the very same pulpit: Turkey's current president, Recep Tayyip Erdogan.

Back in 2013, Erdogan had slammed the two opposition parties, the People’s Republican Party (CHP) and the Nationalist Action Party (MHP), both of which were opposed to Erdogan’s “Kurdish opening.” Erdogan had said, “MHP and CHP [parliament members] should read the first official records of the parliament. They will see the word 'Kurdistan' in those records. When they look into the past, they will see that the eastern and southeastern [regions] are the Kurdistan region of the Ottoman [Empire].”

So how is it that the concept of Kurdistan, which Erdogan defended four years ago in reference to the Ottoman past, is now punishable by Erdogan’s own party?

The simple answer is that the Turkey of 2013 and the Turkey of 2017 are very different places. In 2013, the AKP still imagined itself as a Reformist party questioning the century-old political taboos of the republic, including the hypersensitive “Kurdish question.” That is why the party that represents the most uncompromising version of Turkish nationalism, the MHP, was up-in-arms over the AKP, constantly accusing it of “high treason.” The Gulenists, also key actors at the time, likewise opposed certain aspects of Erdogan’s Kurdish opening, such as the “peace process” with the armed and outlawed Kurdistan Workers Party (PKK).

In today’s Turkey, however, the reforms and openings of the AKP have long passed. The party today only speaks in the most ominous language of “old Turkey,” which is all about deadly threats, pernicious enemies, evil traitors and the ruthless power of the state. The peace process with the PKK collapsed in summer 2015, with the AKP embracing the hawkish security policies that it had formerly opposed. As a result, the MHP became the AKP’s new best friend. In fact, the parties now co-exist as if two pillars of an Islamo-nationalist regime spearheaded by Erdogan.

Such dramatic swings in politics are a bit bizarre, but they are not unusual. Yet there is something more to Turkey’s swings: When politics in Turkey go in a certain direction, everything else follows. The media follows. Academia follows. The very concept of “truth” follows.

Here is the truth about “Kurdistan,” at least in my view: An independent country of Kurdistan has never existed, but Kurdistan has always existed as a cultural region. The Ottomans, as Erdogan rightly noted, never shied away from using the term “Kurdistan” to define their predominantly Kurdish provinces. They even created an administrative unit called Kurdistan in 1847, which was renamed Diyarbakir in 1867.

So, today, can a parliamentarian from Turkey’s predominantly Kurdish provinces claim to be “from Kurdistan”? If he or she is referring to a historical-cultural region, yes. By doing so, he or she would also be echoing the political movements, as well as terrorist groups like the PKK, that aim to create an “independent Kurdistan” by carving large chunks of land from Turkey. Most Turks are rightly concerned about this, as would anyone facing a violent “separatist” movement.

The solution, however, is not to deny historical terms or ban their mere utterance, but to have an open, honest dialogue about the political meaning we impart on them today. Yet such a dialogue is either impossible or ineffective in Turkey, precisely because of the aforementioned problem of politics.

In Turkey, politics — and sometimes a single political leader — defines everything. In the current climate, Erdogan defines everything, and all else follows: the entire AKP, the whole bureaucracy, pro-Erdogan media, pro-Erdogan “intellectuals,” university administrations, and countless numbers of “NGOs” that are in fact under the government's thumb. If Erdogan initiates a “Kurdish opening,” then “Kurdistan” exists for them. If the “Kurdish opening” closes, “Kurdistan” ceases to exist for them.

The same relativism applies in every other arena. The entire world gets defined and redefined according to the machinations of Turkey's leader. Thus, the European Union can go from being a beacon of democracy that Turkey should emulate to being a “crusader alliance” that Turks should be alarmed about. Syrian President Bashar al-Assad can go from best friend to evil dictator and then back to being not so bad again. Ahmet Davutoglu can be hailed as the great “teacher” who will lead the AKP for the next decade and then be dismissed as someone compromised by the Western cabals conspiring against Erdogan. Yesterday’s heroes can be today’s traitors, and today’s heroes can be gone tomorrow. There is only one constant “truth” — the will of the leader. All else is contingent.

One could call the prevailing situation Turkey’s “post-truth moment.” In it, truth does exist, but only as defined by power. Turkey will not make much progress, however, unless it reverses the nature of this relationship: determining power according to the truth, instead of determining the truth according to power.