The word “Kurdistan” is once again becoming taboo in Turkey, with the judiciary targeting parties and civic groups that use the word in their names. 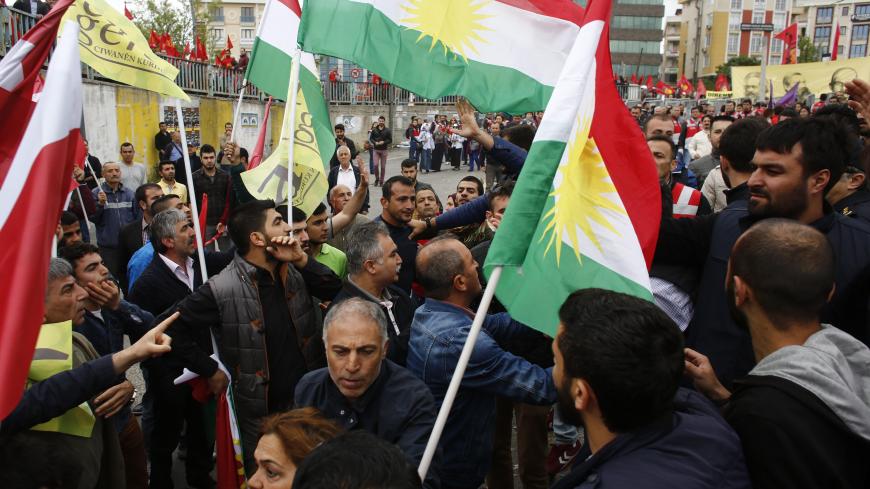 Protesters with Kurdistan flags scuffle with policemen in plain clothes during a May Day demonstration in Istanbul, Turkey, May 1, 2016. - REUTERS/Murad Sezer

DIYARBAKIR, Turkey — The word “Kurdistan” may be widely used by the Kurds in Turkey, but it has always been met with suspicion by state officials and nationalist quarters who see it as an expression of Kurdish separatist ambitions. After a period of relative relaxation, the word “Kurdistan” seems to be sliding back into its taboo status in recent years, with the Turkish judiciary targeting entities that use the word in their names.

“Kurdistan” had first appeared in the names of illegal organizations decades ago, including the Kurdistan Workers Party (PKK), which took up arms in 1984. At the height of the PKK insurgency in the 1990s, using the word in public spaces carried the risk of serious penalties.

Things began to change in the 2000s as Ankara softened its stance toward Kurdish cultural demands. The settlement process between Ankara and the Kurds, which began in 2013, brought about a marked relaxation, leading to the establishment of political parties and civic groups that used the word “Kurdistan” in their names. As a result, the word came to be used in the official dealings of those entities as well as in public life. The state authorities were not completely indifferent, however, cautioning parties to amend their names and charters. Yet in the moderate climate that prevailed at the time, they refrained from further action.

After the settlement process collapsed in July 2015, Ankara toughened its stance on the Kurdish question and authorities’ tolerance ran thin. Stalled proceedings have now been revived and shelved files have been reopened.

First in line was the Kurdistan Freedom Party (PAK), which in 2014 had been notified to amend its name and charter by the chief prosecutor’s office of the Appeals Court. After it refused to heed the notice, judicial authorities opened a closure case against the party. At a press conference on the issue earlier this month, PAK leader Mustafa Ozcelik remained defiant, saying the move flouted basic human rights. “We maintain that the freedom of thought and organization is one of the most fundamental human rights anywhere in the world. We call on Turkey to abide by them,” he said.

Facing the risk of closure is also the Kurdistan Socialist Party (PSK), which became an officially registered party in 2016 after nearly four decades underground. Like the PAK, it had been served notice earlier but no legal action had followed — that is, up until the political tide turned.

For PAK deputy chair Bayram Bozyel, the successive judicial moves against Kurdish parties are the result of the changed political atmosphere. Following the collapse of the settlement process in 2015, “Turkey returned to violence and increasingly fell into the grip of policies of violence and war,” he told Al-Monitor.

Referring to the ruling Justice and Development Party’s (AKP) alliance with the far-right Nationalist Movement Party (MHP), Bozyel argued that “it is the MHP policies that steer Turkey’s political system today, even though the AKP is [the party in power] and its chairman is the president.”

He vowed that “those closures will not go easy because the Kurds will not give up on their gains and the democratic ground,” adding that “Turkey’s democratic forces must not let this happen.”

Bozyel said the PAK had no intention of changing its name and was ready to go all the way to the Strasbourg-based European Court of Human Rights (ECHR) to defend its position. “We will turn this legal process into a platform of defending the name Kurdistan and related values. We are planning to mobilize a campaign in the legal realm. … This might turn into an opportunity,” he said.

Bozyel expressed confidence that even if the targeted parties were outlawed, the ECHR would reject the rulings. “There is a consensus within the incumbent system that no party can be shut down as long as it does not resort to violence,” he said. “It is unacceptable for the country to regress from this point. We will struggle for that.”

The Kurdistan Industrialists and Businessmen's Association (KURDSIAD) was another group that came into being in the years of the settlement process, created by a group of business people in Diyarbakir, the largest city of the Kurdish-majority southeast. In 2017, a court in the city dissolved the association and slapped a 10-month jail sentence on its president, Abdulbaki Karadeniz, for violating the law on associations. Now, five years after KURDSIAD’s creation, the eight members of the original executive board face trial over the word "Kurdistan" in the name of the already defunct association and several articles in its charter. They stand accused of violating constitutional provisions on the indivisibility of Turkey’s state and nation.

Karadeniz’s lawyer, Baris Yavuz, believes the judicial authorities are acting on political orders. Recalling that the association was established in 2014, he said, “Why did they wait for five years? … Obviously, they have been told to bring lawsuits against anything related to the Kurdistan issue.”

Yavuz noted that the judicial moves came amid a rise in nationalist sentiment in Turkey. “Nationalism is something that scores points in Turkey today. Also, it is thought-provoking that all this is happening ahead of elections,” he added, referring to the March 31 municipal elections.

For the Kurds, the name “Kurdistan” denotes a geographical region. Yet no court in Turkey is expected to pay regard to this argument in the current atmosphere. How the trials will affect the elections is hard to predict, but one can easily see that they will herald trouble for Turkey in the international arena for years to come.