Kurds unite in new effort against linguistic assimilation in Turkey

In a rare show of unity, nine Kurdish parties in Turkey have established a joint platform to promote the use of the Kurdish language against what they see as a creeping danger of assimilation. 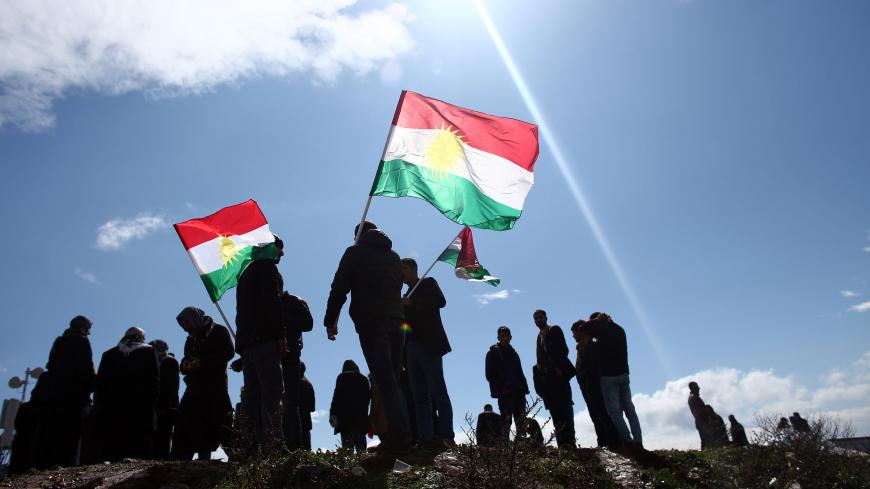 Kurds from Turkey and Syria hold up Kurdistan flags as they celebrate the Kurdish New Year in Diyarbakir, Turkey, March 21, 2015. - Carl Court/Getty Images

DIYARBAKIR, Turkey — Nine Kurdish parties in Turkey have joined forces in a fresh drive to fight for more language rights and shield Kurdish from what they see as the creeping danger of assimilation and oblivion.

The initiative aims to revive the Kurds’ decades-long efforts to use their language freely, especially in education. The struggle has been in a lull since settlement talks between Ankara and the Kurds collapsed in 2015. The breakup of the peace process reignited clashes between the security forces and armed Kurdish militants, followed by a ferocious clampdown on Kurdish political quarters that saw the seizure of Kurdish-run local administrations and the arrest of dozens of senior Kurdish politicians, including parliament members.

Speaking to Al-Monitor, PSK Deputy Chair Bayram Bozyel argued the Kurdish language faces extinction in Turkey. “With all its means, Turkey is pursuing a policy to assimilate [Kurds] and wipe out the Kurdish language,” Bozyel said. “To fend off this threat, nine Kurdish parties came together and decided to work jointly to sound the alarm and raise awareness.”

Language has always been a pivotal theme in the Kurdish struggle for rights and freedoms in Turkey. The restrictions date back to the early years of the modern Turkish republic in the 1930s, when a campaign called “Citizen, Speak Turkish!” pressured minorities to speak the official language and Kurds faced fines for speaking their mother tongue in public. In 1958, Kurdish writer Musa Anter created a furor when he published text in Kurdish — the lyrics of a folk song — in a local newspaper in Diyarbakir, the largest city of the Kurdish-majority southeast. In 1977, the first Kurdish-language newspaper, Roja Welat, began publication, but was soon shuttered by the martial rule in the country.

De facto restrictions on the Kurdish language and even Kurdish music continued for years before a ban was put into effect after the 1980 military coup. The 1983 law prohibited “the expression, dissemination and publication of thoughts in languages other than the first official languages of states recognized by the Turkish state.” The ban was abolished in 1991 thanks to efforts by then-premier Turgut Ozal, but restrictions continued on the ground.

The biggest gains for the Kurds came in the 2000s, when Ankara initiated democratic reforms to support its bid to join the European Union. The government created a Kurdish-language TV channel and introduced elective courses in Kurdish in public schools.

The use of Kurdish proliferated, but the authorities often remained vindictive. In 2009, for instance, Kurdish mayors were sued for printing festival invitations in Kurdish, with the official accusation being that the invitations contained letters such as W, X and Q that do not exist in the Turkish alphabet. Kurdish politicians had run-ins with the judiciary for using Kurdish in election campaigns, and the Diyarbakir Bar Association for printing day planners in Kurdish.

Since the collapse of the settlement talks, language restrictions have made a comeback. And with the Kurdish political movement largely paralyzed, the issue has remained in the shadow of the crackdown.

According to Bozyel, the new platform has three main objectives. The first is to encourage Kurds to use the language more. Kurdish is spoken almost exclusively in rural areas, but in urban centers, Turkish is the dominant language in the street and many young Kurds remain disconnected from their mother tongue.

“How can we, Kurds, protect our language? How to use it more in daily life? This is our first goal and we need to show a strong will here,” Bozyel said.

“Second, a language cannot be protected only through usage in daily life. Assimilation cannot be stopped unless it becomes an official language and an education and market language,” he said. “It could become official with Turkey’s permission; hence Turkey and the government are a party to this problem. We want Kurdish to become a language of education in Turkey and the Kurdish regions, along with Turkish, to be taught from primary school to university and be an official language.”

The third objective has an international aspect. Referring to Turkey’s EU accession bid and membership in UN institutions, Bozyel said the platform would seek international support to put pressure on Ankara. Even if Kurdish “cannot become an official or education language at a stroke,” the aim is to popularize its usage, he added.

Bozyel said the platform would organize a workshop Nov. 10 to outline a road map of its activities.

Vahit Aba, a senior PAK member, grumbled that Turkish dominates the public space in predominantly Kurdish cities. “It’s as if speaking Turkish is normal and speaking Kurdish is abnormal in shops, at markets and in the street,” he told Al-Monitor. “Someone had to step in. This is a duty not only for political parties but for everyone. We decided to organize a workshop with academics, linguists and psychologists — that is, people who are knowledgable on how language affects society.”

The “real work” will kick off after the workshop, Aba said, noting they would discuss what to ask from the Kurds, what the state and international organizations should do and what a path toward the ultimate goal of making Kurdish an official language looks like.

The initiative received a message of support from Selahattin Demirtas, arguably the most popular Kurdish politician in Turkey today, who has been behind bars for two years. In a letter from prison, Demirtas lent support to “any effort for the free, unimpeded use of Kurdish in all spheres of life, including education, the economy and social and political realms.” He noted that he himself was continuing to study Kurmanji, the main Kurdish dialect in Turkey, in prison.

Ordinary Kurds have met the initiative with remarkable excitement. Sivan Vural, a shopkeeper in Diyarbakir, hailed the platform as “a very important step in terms of Kurdish unity in the political and social fields.” He voiced hope that the spirit of unity would extend to local elections in March and lead to an electoral alliance.

The drive's results are hard to predict. The initiative presents an opportunity to Ankara to respond positively and thaw the ice with the Kurds, but the state’s traditional impulse of rejection could equally prevail.