As Iraqi Kurdistan’s independence vote nears, some Turkish Kurds are making efforts to thaw Turkish opposition to the referendum. 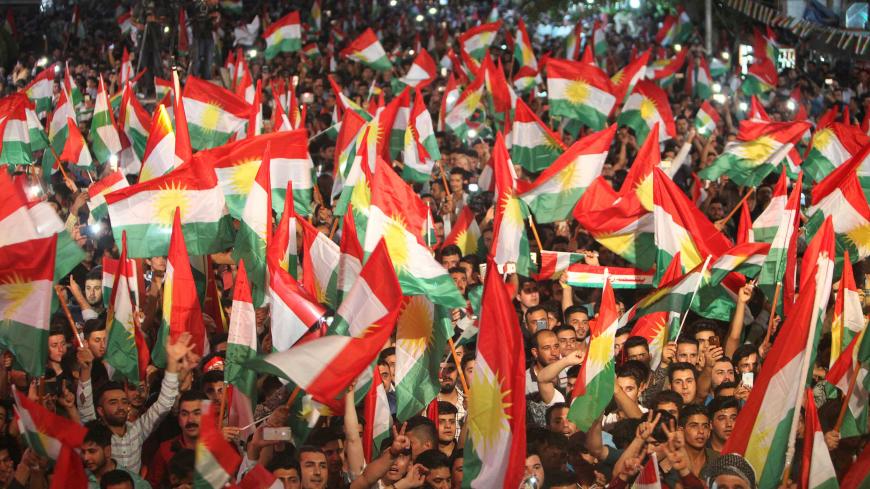 DIYARBAKIR, Turkey — Iraqi Kurdistan is gripped by excitement ahead of the Sept. 25 independence referendum. The sense of hopeful anticipation, however, is not limited to Iraqi Kurds. Their cousins in neighboring Turkey — reeling from Ankara’s heaviest crackdown in years — are watching the process with an equal excitement, hoping that a vote for independence will boost the standing of Kurds across the region. And some are not only watching. Kurdish groups on good terms with Massoud Barzani’s Kurdistan Regional Government have joined forces to promote the referendum, striving to allay deep-rooted Turkish apprehension and hostility toward Kurdish independence.

Since its creation in mid-July, the platform has met with Turkish opposition figures and nongovernmental groups, but its bids for meetings with government representatives have so far failed.

The platform is seeking contacts with the United States and European countries as the referendum has received little international support. “We got appointments from the European Union and American embassies,” Vahit Aba, a PAK activist on the platform, told Al-Monitor. “We will explain to them why we back the referendum, that they should respect the outcome because every nation has the right to self-determination, that this is in line with international law, that our brothers in the south have that right, too, and that this should be recognized internationally.”

Aba argued that the eventual emergence of a Kurdish state would stimulate democratic progress across the region. Iraqi Kurdistan is already “a place with five official languages, where all religious minorities are represented at the religious affairs administration,” he said. “Its independence would impact surrounding regions as well. Democratic demands would rise in the neighborhood [and] all neighboring states would be compelled to democratize.”

Aba said the platform has met with representatives of Turkey’s main opposition Republican People’s Party, but that the platform's requests for meetings with President Recep Tayyip Erdogan and his Justice and Development Party (AKP) have remained unanswered. “We met with the main opposition. They listened to us and we conveyed our views,” he said. “The government has deliberately chosen to stay away and not get involved in this. We have received no reply from the presidency and no AKP body has agreed to meet with us.”

The platform has also distributed leaflets printed in Turkish, Kurdish and Zazaki, and sent letters to all Kurdish lawmakers in Turkey’s parliament, regardless of their parties, requesting support for the referendum, said Hasan Dagtekin, a PSK activist with the platform.

Their meetings with civic groups have been largely positive, Dagtekin said, stressing that Turkey should not align with Iran in opposing the referendum. “We have not met with the government … but we hope they will not reach an agreement with Iran to stand against. Turkey should not act like Iran,” he said. “Our objective is [to convince] Turkey’s public and political quarters to not do that.”

Given Turkey’s ongoing state of emergency that has severely stifled political activism, especially on the Kurdish scene, the platform’s ability to continue its efforts seems quite remarkable.

Ankara, which has enjoyed close ties with Barzani, has voiced opposition to the referendum but has done nothing concrete to prevent it. During a visit to Erbil last month, Turkey’s foreign minister asked Barzani to cancel the referendum but made “no suggestion at all of sealing the border, revisiting trade or suspending money transfers to Erbil,” a senior Iraqi Kurdish official told Al-Monitor’s Amberin Zaman.

When it comes to the platform’s activities, the Turkish authorities are mostly looking the other way, according to Sidki Zilan, who represents the Azadi Movement on the platform. “We asked for official permissions on several occasions and got obstructed. There is a de facto situation at present. They are like ‘We don’t see you,’” Zilan told Al-Monitor. He suggested that the AKP, which has enjoyed solid support from conservative Kurds over the years, seemed wary of further antagonizing the Kurdish community ahead of Turkey’s crucial presidential election in 2019. “They have the election on their mind because the Kurdish vote is decisive," he said.

The platform is planning to hold a rally in Iraqi Kurdistan on Sept. 24, a day before the referendum.

The HDP has also lent support to the Iraqi Kurds. In a message from prison this week, HDP leader Selahattin Demirtas said, “We stand by our brothers, no matter what the outcome of the referendum will be.”

The HDP’s sister party, however, has raised objections. The Democratic Regions Party, which focuses on local politics, said Sept. 10 that the referendum was “an attempt to choke the Kurdish demand for freedom and status with a tiny nation-statelet.” According to the statement, “artificial borders” have divided the Kurds for centuries, and it is important to convene a “national congress” and work for “national unity,” which it described as “the only winning road map for Kurds amid the crisis in the Middle East.”

The Rights and Freedoms Party, another Kurdish party that is not part of the platform but nonetheless supports the referendum, argues that Turkey should be the first country to recognize the independence of Iraqi Kurdistan, stressing the potential of significant economic benefits. “Turkey should recognize Kurdistan’s independence before anyone else, which would ensure peace and stability in Turkey as well. Twenty-five million Kurds live in Turkey, and Turkey should take their sensitivities into account,” party chair Refik Karakoc said at a Sept. 9 gathering in Diyarbakir. “Kurdistan is also one of Turkey’s largest trade areas. Meeting Turkey’s oil and gas needs from Kurdistan would be much cheaper. An independent Kurdistan will benefit Turkey both politically and economically.”

Turkey’s Kurds have had a rough patch in the past two years, marked by devastating clashes between militants of the Kurdistan Workers Party (PKK) and the security forces and then the heavy-handed emergency rule. The referendum in Iraqi Kurdistan has emerged as a glimmer of hope, as many seem to believe that Kurdish statehood across the border would positively affect the standing of all Kurds in the region. Even sympathizers of the PKK, which has had tense relations with the Barzani administration, are supportive of the referendum. As one of them told Al-Monitor, “What matters is that the Kurds have a state — no matter how.”