Turkey’s nationalist opposition leader has warned of 5,000 volunteers ready to fight for the Turkmens in Kirkuk, but Turkey’s own Kurds seem to be the actual target of the threat. 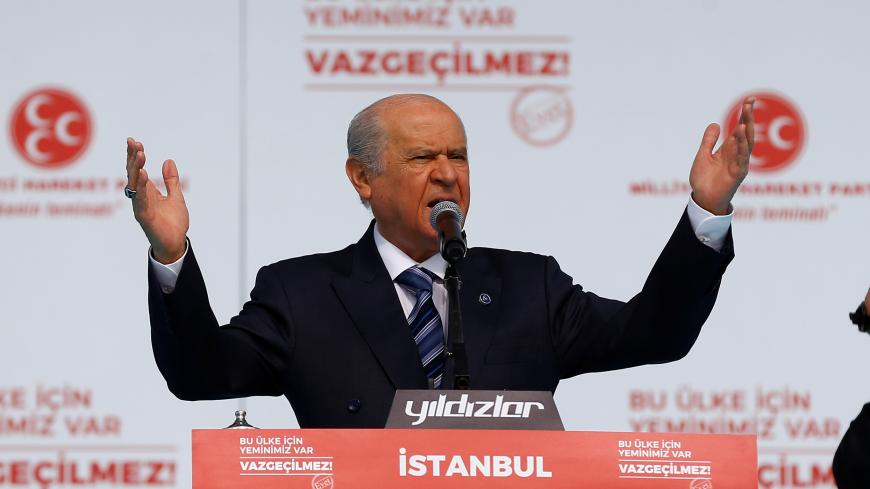 Since the Iraqi Kurds voted for independence Sept. 25, Turkey has been hurling threats of political, economic and military sanctions against the Kurdistan Regional Government (KRG). Turkey’s nationalist opposition leader has added an unprecedented warning to the barrage of fury coming out of Ankara: to send thousands of volunteers to defend the Turkmen minority in northern Iraq.

According to Devlet Bahceli, the head of the Nationalist Movement Party (MHP), Ankara should consider the referendum a “cause of war.” In a Sept. 27 statement, Bahceli, who has been a de facto ally of the ruling party for some time, slammed the government for failing to enact “concrete” measures against the KRG. “At least 5,000 [nationalist] volunteers are waiting, ready to join the struggle for existence, unity and peace in the Turkmen-populated … cities, notably Kirkuk,” he said, referring to members of the Idealist Hearths, a youth organization affiliated with his party.

On Oct. 3, Bahceli went even further. First, he asserted that his warning of about 5,000 volunteers on standby was neither a “bluff” nor a “claptrap.” Then he threatened the annexation of Mosul and Kirkuk, evoking the 1920 Misak-i Milli (National Pact), a manifesto adopted at the outset of the Turkish liberation war upon the Ottoman defeat in World War I, which included Mosul and Kirkuk within Turkish national borders. “When conditions become ripe, when history can no longer fit into [the current] geography, Misak-i Milli will awaken. Then, no power will be able to stand in the way of the right to say 82 Kirkuk, 83 Mosul after 81 Duzce,” he said, referring to the license plate numbers of Turkey’s 81 provinces, where Duzce stands on the bottom of the list.

Bahceli’s mention of 5,000 volunteers does not seem to be a randomly uttered number. Had he meant his grassroots and youth branches in general, he would have spoken of hundreds of thousands of people. By giving a specific figure, he seems to suggest that the MHP has a contemplated and calculated army of “volunteers.”

And who are those volunteers? The answer came in a photo that hit social media in the wake of Bahceli’s statements. In the photo, three members of the Idealist Hearths, including the deputy chair of the organization’s Istanbul branch, were seen brandishing arms — an M3 submachine gun, a Kalashnikov rifle and a pistol — in front of an Idealist Hearths banner. A message accompanied the picture: “It must be known that we are ready to go through any suffering, hardship and ordeal to make sure that Turkishness lives on, that its survival is ensured and that the clouds of nightmare over the Turkmen homelands are dispersed. Everybody should make their calculations accordingly. Five-thousand [nationalists] are ready to go to Kirkuk.”

The photo suggests that Bahceli’s “volunteers” are armed civilians or, in a sense, a militia. That this armed group could number 5,000 is frightening. Remarkably, no judicial or political authority questioned how those men had obtained weapons, why they felt the need to arm themselves and whether they had used the weapons before. Moreover, the ruling Justice and Development Party (AKP) reacted in a rather tolerant fashion to Bahceli’s outburst. Party spokesman Mahir Unal said Sept. 27 that the AKP “understood” and “shared” the MHP leader’s concerns.

In Turkey, a political party’s claim to have a militia force ready to go to Kirkuk to fight may sound outlandish, but it is not hard to infer that Turkey’s own Kurds are the actual target of those armed “volunteers.”

Refik Karakoc, the head of the Kurdish-dominated Rights and Freedoms Party, which openly backed the Iraqi Kurdish referendum, said the images of the armed “volunteers” are deeply worrisome. Speaking to Al-Monitor, Karakoc recalled the massacres of Alevis in Maras (1978) and Corum (1980), which unfolded upon provocations by paramilitary groups and in which MHP supporters were actively involved. “They assumed that role in the past,” Karakoc said. “I hope they don’t do the same thing again.”

The MHP leader’s remarks and the images of armed MHP supporters are “threats directed to all Kurds” that “have inevitably led to unease,” Karakoc stressed. He added, “We are struggling for rights and justice. The Kurds are not doing injustice or oppressing anyone. They are only asking for their rights in their own lands. … There is no place for such behavior in democracy. I hope they will not resort to such means.”

Karakoc noted that both the government and the MHP had stepped up their nationalist rhetoric after the KRG referendum. “Enmity towards Kurds is not something new. The enmity of chauvinists and fascists in Turkey is particularly well known,” he said. “This, however, is the product of political institutions only. Ordinary people have no Kurdish problem. Political institutions are deliberately creating polarization. People with common sense should stand up against that.”

Since the Kurdish settlement process collapsed in 2015, the AKP government and its political partner, the MHP, have used an increasingly nationalistic and sometimes even chauvinistic rhetoric against the Kurds. The pitch of this rhetoric has reached a new high after the KRG referendum. Speaking in parliament Oct. 5, Altan Tan — a deputy for the Peoples’ Democracy Party (HDP), Turkey’s main Kurdish political movement — said the fury stemmed from fears that “if a Kurdish state is established in Iraq, Turkey itself will break up after some time.” Responding to the fears, he said, “The Kurds do not want to break up. Ten million of them are living in the west [of Turkey] and there are 3 million Kurdish-Turkish marriages.”

Yet less than a month ago, a nationalist mob descended on the funeral of the mother of a senior HDP member in Ankara, disrupting the ceremony and prompting the family to remove the body from the grave and rebury it in their hometown in eastern Turkey. The assault, which took place despite the presence of security forces at the cemetery, was perhaps the best illustration of how discriminative rhetoric against the Kurds can spiral out of control on the ground.