Is Turkey heading toward civil war?

Following the deaths of 30 soldiers and police in PKK operations, a nationwide wave of attacks on Kurds has increased the risk of deepening ethnic strife and stoking renewed separatist sentiment. 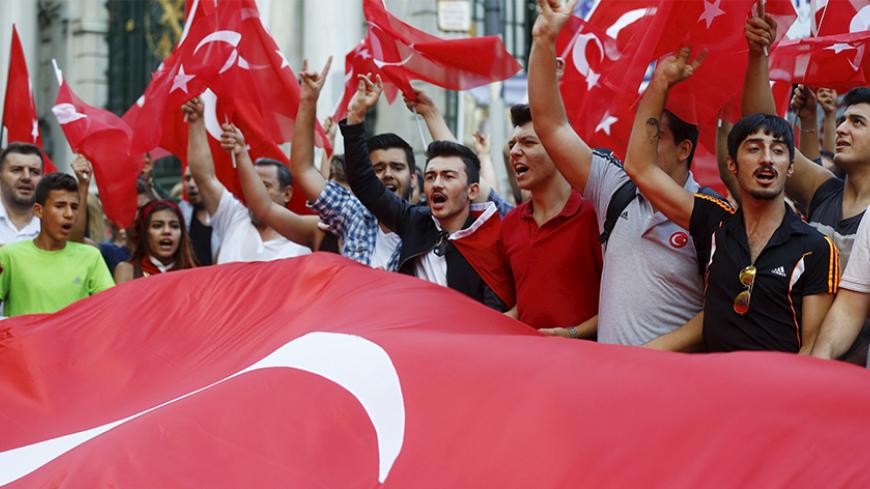 The fierce conflict between the Turkish security forces and the Kurdistan Workers Party (PKK) in the 1990s claimed some 40,000 lives, but it never devolved into a Turkish-Kurdish civil war. Although a number of bloody incidents took place in residential areas of western Turkey where Kurdish minorities lived, they were quickly contained before they could spread.

The first sign that real Turkish-Kurdish strife is possible came in October 2014, during the deadly street protests referred to as the “Kobani unrest.” During Oct. 6-8, Kurds across Turkey took to the streets to protest the ruling Justice and Development Party (AKP), which they held responsible for the siege of the Syrian Kurdish city of Kobani by the Islamic State (IS). In ethnically mixed, Turkish-majority cities, such as Gaziantep, Turkish crowds confronted the demonstrators. In fact, clashes in Gaziantep claimed four lives. Deaths from the unrest, which spilled over to 35 cities, totaled 50, and thousands of public and residential buildings, businesses, schools and vehicles were vandalized or destroyed.

Since Sept. 8, Turkey has been the scene of nationwide attacks on Kurds that are unprecedented since the PKK took up arms in 1984. The wave of violence erupted after two massive PKK bomb attacks killed 16 soldiers and 14 policemen on Sept. 6 and Sept. 8, respectively, spreading to almost all the provinces outside the Kurdish-majority regions of the southeast. Nationalist groups took to the streets, assaulting Kurdish civilians, Kurdish-owned businesses and offices of the pro-Kurdish Peoples’ Democratic Party (HDP), which had emerged as Turkey’s third-largest party in the June 7 elections, winning 13.1% of the vote and 80 seats in the 550-member parliament. The party’s offices in 56 provinces and districts were stoned, vandalized and torched. The attacks reached a peak late Sept. 8 when a mob of some 500 people stormed HDP headquarters in downtown Ankara, ransacking and burning part of the building.

Turkish nationalists, reported to have mobilized via social media, also attacked intercity buses carrying passengers to Kurdish-majority regions. Dozens of buses, singled out according to their license plates or company names, had their windows broken under hails of stones, while others were stopped and their passengers verbally and physically harassed. As a result, bus companies operating between the western regions and Diyarbakir, the largest city in the southeast, canceled services Sept. 9-10 to protest the violence.

Impoverished Kurdish workers struggling to make a living from seasonal agricultural jobs across the country were not spared beatings and harassment. Meanwhile, one of the worst nights of horror unfolded Sept. 8 in the central Anatolian city of Kirsehir, where more than 20 Kurdish-owned businesses and shops, including the city’s only bookstore, were torched. The local HDP office was vandalized, and vehicles bound for the southeast were stoned at the city’s bus terminal. According to witnesses, the assailants, who numbered in the thousands, carried lists of their targets. Kirsehir Gov. Necati Senturk blamed the violence on “provocateurs who mingled into an innocent demonstration to condemn terrorism.”

Indeed, the popular outrage the PKK has triggered by killing 30 members of the security forces in two days has presented provocateurs with a golden opportunity. Luckily, as of Sept. 10, the attacks on businesses and party offices had not resulted in any fatalities, but no doubt this good fortune cannot last forever. The danger of frenzied, gun-wielding Turks and Kurds confronting each other in the streets is very real, as the Kobani protests have already shown.

That said, the risk of an all-out confrontation appears for now to have been averted. HDP parliamentary whip Idris Baluken issued a poignant warning Sept. 9, stressing that simultaneous, organized attacks in dozens of cities cannot be explained as a coincidence. “We are hardly restraining our own base,” he said. “Everyone should well foresee the consequences if the masses confront each other.” Turkey’s Kurds are estimated to number at least 15 million, with half of them living in the country’s predominantly Turkish west. This alone offers a good idea of how bloody an ethnic conflict could be.

HDP offices and election bureaus had been targets of violence in the run-up to the June 7 polls, including the site of two bomb attacks. The HDP and the Kurdish movement in general showed restraint and stayed out of the streets. They maintained such discipline even after a bomb ripped through an HDP rally in Diyarbakir on June 5, killing four people and wounding 50. Kurdish street unrest at the time would have jeopardized the party’s chances of reaching the 10% threshold of votes required to enter parliament.

The HDP again faces the same risk if Kurds respond to provocations and take to the streets, contributing to a climate of all-out conflict ahead of the Nov. 1 snap elections. Failure by the HDP to surpass the vote threshold will very likely mean the AKP’s return to power as a single-party government.

The job of the provocateurs, meanwhile, has become much easier than in the run-up to June 7. The war with the PKK has resumed, triggering a contest for the nationalist vote between the AKP and the Nationalist Action Party (MHP), which translates into enmity against Kurds in the street. It is no wonder that a series of attacks against Kurds occurred during nationwide marches by Idealist Hearths, a group close to the ultranationalist MHP, held Sept. 8 under the slogan “Pay respect to martyrs, condemn terrorism.”

The on-and-off periods of cease-fire and fighting since 1999 seem to have greatly lowered the Turkish majority’s threshold of psychological resistance to violence. Turks have since become less tolerant of PKK attacks. The sudden resumption of bloodshed and the daily funerals of soldiers and police — just as hopes for a peaceful settlement had been raised, leading to a sense of relief that “it’s finally over” — seem to have intensified the trauma. This, in turn, is fanning the hatred.

A failure to immediately stop the violence against Kurds could have two major impacts on the restive community. First, the attacks against the HDP could lead Kurds to lose faith in politics as a means of contributing to the settlement of the conflict. This, in turn, would inevitably strengthen the inclination to use violence as a political tool and stoke separatist sentiment. Second, continued attacks on Kurds, their businesses and buses and a feeling that western Turkey is no longer safe for Kurds and their investments will accelerate psychological estrangement among Kurds, with the result again being a strengthening of separatist sentiment. The sense of estrangement will only grow stronger if Kurds also come to believe that the security forces are not doing enough to protect them.