Who is behind violence against the Kurds?

Probes into a recent wave of mob violence against Kurds in Turkey suggest connivance between assailants, economic actors and the authorities. 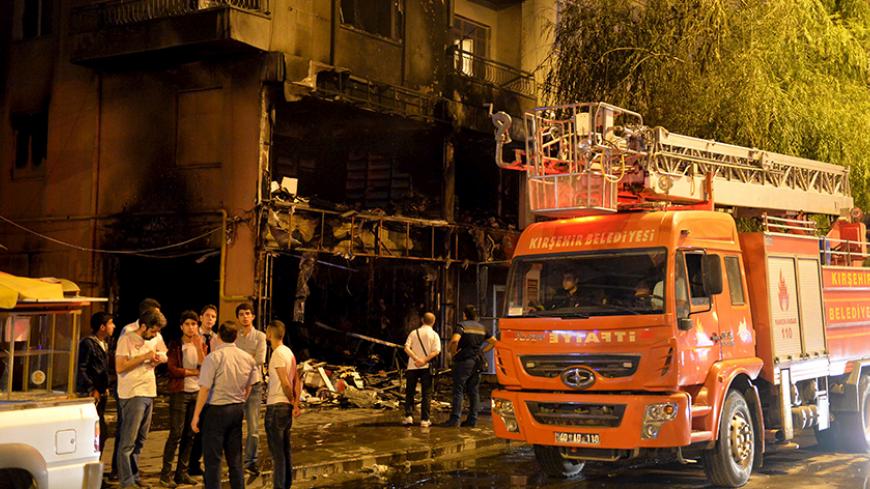 A firetruck is parked outside of a damaged bookstore after it was set on fire by ultranationalist protesters in Kirsehir, Turkey, Sept. 9, 2015. - REUTERS/Stringer

More than two decades after 33 intellectuals perished in the torching of the Madimak Hotel in the Turkish city of Sivas, those who believed that Turkey has matured and such violence is now left in the past have been proven wrong. Hundreds of mob attacks have targeted Kurds, Kurdish-owned businesses and the offices of the pro-Kurdish Peoples’ Democratic Party (HDP) since July 24 when Ankara launched military operations against the Kurdistan Workers Party (PKK) and the PKK responded with bloody attacks. Some of the worst mob violence occurred on Sept. 8 in Kirsehir, a city known with its pluralist and democratic fabric. Last week, the public got an idea of what really unfolded in Kirsehir as horrific footage from security cameras, collected by the prosecutor, were leaked to the media.

The crowd, which had originally gathered for a march to condemn terrorism, set ablaze the local HDP office, a bookstore owned by a leftist Turk and an ethnic Circassian HDP member, as well as four Kurdish-owned businesses, and vandalized 32 other shops and homes.

The assailants acted in an organized manner, torching the buildings according to a predetermined list, the Hurriyet daily reported, citing local sources. As the mob went on the rampage for seven hours, the police looked the other way, failing to stop even the attack on the Gul Bookstore, a stone’s throw from the police station.

“They wanted to burn us alive. There were four other people with me [inside the store]. … The Madimak incident flashed through my mind. It was an organized affair,” bookstore owner Sait Akilli told Hurriyet. He said Kurds were the main target, but his shop, too, was attacked because of his leftist views.

Huseyin Beydogan, owner of another store near the police station, said, “Shortly before the attack, a friend called me to say we were on the list [of planned attacks]. We closed the store, and 10 minutes later the attack began. There was a group of policemen who only watched.”

The chairwoman of the HDP’s local branch, Demet Resuloglu, also accused the police, saying, “I called the police and told them our office would be attacked and they should take precautions, but they didn’t. In the evening, I called them again and they told me they [the crowd] would not march to our office and that the situation was under control. Half an hour later, our building was under attack. I moved to the Gul Bookstore. Next, they came to the bookstore and set it ablaze. … We called the governor and the police chief, but no one responded. … We escaped with our lives after jumping from the second floor. It was an organized affair. Everything happened within the knowledge of the police, the governor and everybody.”

The main opposition Republican People’s Party (CHP) sent an inquiry team to Kirsehir. The team came up with a striking report that included the following findings and allegations:

No official has been removed from office or resigned over the unrest. Twenty suspected assailants were detained three days after the riots, but most were soon released. Sixteen suspects were indicted for the attack on the bookstore, with only six of them kept behind bars, while three suspects were arrested for torching the HDP office.

Journalist Ismail Saymaz, who has followed the issue closely, also believes the attacks were pre-organized, stressing that the Ottoman Hearths and the Idealist Hearths are suspected of being involved.

In remarks to Al-Monitor, Saymaz said, “One of the arrested suspects belongs to the MHP. Yet the Ottoman Hearths may turn out to be behind all this. The Ottoman Hearths are acting in parallel with the government. They were behind a number of incidents, including the attack on Hurriyet newspaper. The attacks [in Kirsehir] began after the Ottoman Hearths’ press statement. The police’s failure to stop the attacks for seven hours suggests connivance on the part of the authorities. The streets go ablaze, but the police are nowhere to be seen. The fire brigade is not coming. It took them 25 minutes to go to the Gul Bookstore, and then their hose was cut. In a very small city like Kirsehir, even a five-minute delay cannot be excused. … The suspects were rounded up only a month later, although ample footage was available. I don’t rule out the possibility of a [predetermined] list of targets. Facebook messages between those involved include one that says, ‘There are still the pharmacists who support the terrorists with medicines and 22 other businesses. They will be all burned down as well.’”

A background of economic rivalry

Similar attacks on Kurdish-owned businesses occurred in the Mediterranean resort towns of Alanya and Manavgat. Drawing on his observations in Alanya, journalist and lawyer Ali Topuz said the mob violence followed a similar pattern, involving police inaction as well as an economic dimension that has been little discussed.

“These sinister attacks, which started as protests against terrorism, have an intriguing aspect, which suggests they were not driven merely by ethnic hatred and that some organized forces were involved,” Topuz told Al-Monitor.

“Even more interesting is the profile of those who wanted the detained [assailants] to be released. A lawyer involved in the procedures recounted how the heads of trade and industry chambers … would flock to the courthouse when [the suspects] were brought there. In other words, a structure conscious of economic interests was at the core of the attacks. It was legitimatized and protected by economic actors,” Topuz said.

“I think three forces were at work. First, competitors unhappy with Kurds benefiting from the local economy. Second, local political aspirants, seeking to rise up by blending these grievances with nationalist propaganda. And third, the state itself, using these two segments to deliver a political message … which was basically this: ‘If you support the HDP, if you rally around the Kurdish political movement, there is a populace ready to usurp everything you possess and I wouldn’t show up until they are done.’”

When it comes to Kirsehir, it is a politically balanced city, where leftist and social democrat voters represents some 30% of the electorate. In the June 7 polls, the AKP and the MHP shared the region’s two parliamentary seats with 39% and 31% of the vote, respectively. The CHP and the HDP, meanwhile, garnered 19% and 6%, respectively. Kirsehir’s Kurdish population is centuries old, unlike relatively new Kurdish migrant communities in other places. Far from being a nationalist stronghold, Kirsehir is a city where Kurds and Turks have long been neighbors and relatives. Staying true to this legacy, scores of residents have displayed solidarity with the attacked shopkeepers in a refreshing message of pluralism and tolerance.