Resurging violence between two old Kurdish adversaries in Turkey’s southeast, the PKK and the Islamist Hezbollah, has generated fears of renewed Kurdish fratricide in the region. 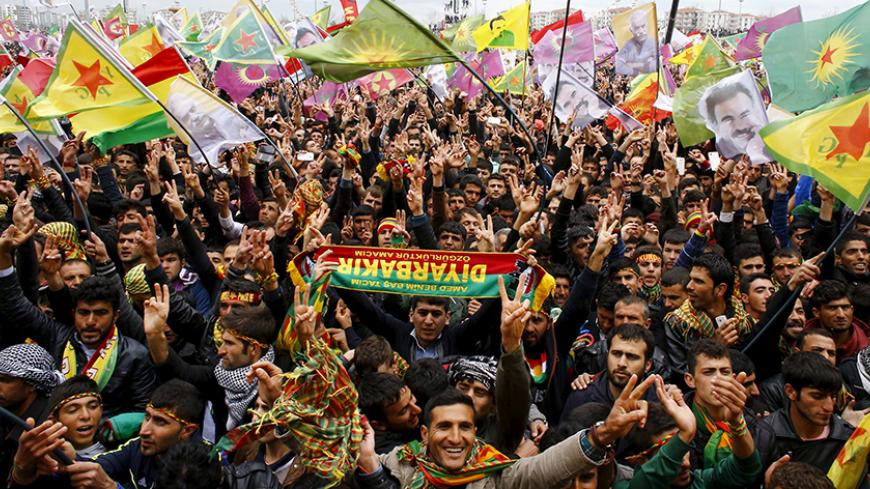 People gesture while others wave Kurdish flags during a gathering celebrating Nowruz, which marks the arrival of spring and the new year, in Diyarbakir, March 21, 2015. - REUTERS/Umit Bektas

A long-standing lull in the bloody conflict between the Turkish Hezbollah, a Kurdish-dominated Islamist group, and the Kurdistan Workers Party (PKK), which has long fought for Kurdish rights in Turkey, has been shattered amid the war between the Islamic State (IS) and Kurdish forces in neighboring Syria. The tensions, which had flared up over the past year, climaxed earlier this month in Diyarbakir, the largest city of Turkey’s Kurdish-majority southeast, when four people close to the feuding sides were shot dead in broad daylight. The unrest sparked fears of renewed Kurdish fratricide in the region, but both sides called for peace and common sense as they have reaffirmed in interviews with Al-Monitor.

To get a better understanding of the unrest, it's worth recalling how the feud unfolded two decades ago in one of the darkest episodes in Turkey’s recent history.

Hezbollah — unrelated to its Lebanese namesake — is one of the main radical Islamist organizations in Turkey. Inspired by the Iranian Revolution, the group was founded in 1978 and got organized in the mainly Kurdish southeast, with its senior members receiving training in Iran, according to a published doctoral thesis by Mehmet Kurt, an academic at Bingol University.

Hezbollah earned itself a gruesome nationwide reputation in the early 2000s when police discovered its so-called grave houses across Turkey, in which dozens of people were killed and buried after torture. The victims included Islamists who disavowed Hezbollah’s ideology and journalists.

Hezbollah, however, targeted mainly the PKK, which was then waging an armed campaign for an independent Kurdistan in the southeast. The PKK responded in kind, and the spiral of violence led to thousands of dead on both sides in the 1990s. The PKK maintained Hezbollah acted as a “subcontractor” of the Turkish “deep state,” and Hezbollah members made no bones about their abhorrence of the PKK.

Hezbollah sank into silence after its founder Huseyin Velioglu was killed in a police operation in 2000 and hundreds of its members landed behind bars. In 2003, Hezbollah sympathizers founded the Association for Human Rights and Solidarity with the Oppressed, which was outlawed in 2012, leading to the creation of the Free Cause Party (Huda-Par) the same year.

The party’s platform bears much similarity to the political agenda of its adversary, the PKK, and the pro-Kurdish Peoples’ Democratic Party (HDP), including calls on the Turkish state to apologize for its oppression of the Kurds and to recognize Kurdish as an official language.

Despite common political demands, the two sides remain at loggerheads in the southeast and even beyond Turkish borders. Kurt said Hezbollah does not support IS directly, but a group that split off from the organization and attracted other Salafists to its fold is fighting alongside IS and other extremist factions in Syria, where many Turkish Kurds have joined the ranks of the People’s Protection Units (YPG), the PKK-linked Syrian Kurdish force battling IS. Thus, Turkish Kurds are now pitted against each both at home and abroad.

IS-related developments became the trigger that brought Hezbollah back to Turkey’s agenda. In October 2014, the HDP urged Kurds to take to the streets in support of Kobani, the Syrian Kurdish town that IS had besieged. The day the protests started, three people were killed in a raid on the office of a Hezbollah-affiliated association in Diyarbakir. In an online statement, Hezbollah blamed the PKK, dubbing the murders a “declaration of war.” Diyarbakir descended into bloody chaos for two days, with the violence spilling over to other regions and resulting in 50 deaths on both sides.

The tit-for-tat murders marked the end of the long-standing lull between Hezbollah and the PKK. Deadly clashes followed in other Kurdish-majority regions like Sirnak and Batman. Most recently, on June 9, unknown assailants killed Aytac Baran, the head of a Diyarbakir association close to Hezbollah, triggering reprisals that claimed the lives of three PKK sympathizers. The bloodshed has stoked tension in Diyarbakir amid fears the Hezbollah-PKK war could erupt anew.

In an interview with Al-Monitor, Huda-Par Chairman Zekeriya Yapicioglu argued the tensions had started long before the Kobani demonstrations, with “hundreds of attacks” targeting his party. In comments on Baran’s murder, he said, “The HDP and the PKK attempted to drag us into violence and they are still trying to do so. We keep saying we won’t fall into those dirty ploys. Hezbollah has made some statements, too, saying it will not keep silent if the attacks continue. A new chapter of conflict could begin unless the PKK stops the attacks.”

Hatip Dicle, a veteran Kurdish politician and co-chairman of the Democratic Society Congress, an umbrella organization of nationalist Kurdish groups, disputed Yapicioglu’s account. “The recent incidents of armed violence are not the work of PKK sympathizers. It is no secret that Hezbollah members roam around armed, attending even funerals with Kalashnikov rifles,” he told Al-Monitor.

Dicle said that shortly after Baran’s murder he received a call from Zubeyir Aydar, a senior PKK figure based in Europe, who conveyed the following message: “On behalf of the [PKK] executive council, I confirm we have no plans to attack Hezbollah. We have absolutely nothing to do with Aytac Baran’s murder.”

Asked whether reconciliation was possible, Dicle said, “We are trying to act with common sense and urging everyone to do the same. The Kurdish people suffered too much during the conflict in the 1990s. We have no interest in the repeat of those sufferings. No one will benefit from conflict.”

Al-Monitor asked Yapicioglu whether the PKK and Hezbollah or Huda-Par and the HDP could sit at the negotiating table, reconcile with the past and hammer out a peace deal. The Huda-Par leader replied, “Our political activities have been obstructed by force, with HDP encouragement. We’d rather discuss this, if we are to talk. But coming to the table will be impossible unless HDP officials stop using offensive language against us. Their language is not the language of peace. As to the past violence between the PKK and Hezbollah, it should be discussed between PKK and Hezbollah representatives.”

Civic groups in Diyarbakir are busy making the rounds to prevent further escalation. The Islamic-leaning human rights association Mazlum-Der is one of them. The chairman of the group’s local branch, Ali Ihsan Gultekin, told Al-Monitor that restoring calm was possible, but stressed the issue was more complicated than just a bilateral feud, involving also the Turkish state and its rogue elements.

“Both sides’ leaderships are capable of achieving [reconciliation]. But if the issue is about power struggle, problems could be hard to overcome,” Gultekin said. “Bringing the two sides to the negotiating table is a very complex issue because the PKK and Hezbollah are not the only parties. There are also JITEM [a notorious, secret anti-terror military unit] and the state. We don’t know who committed which murders [in the 1990s]. Many killings remain unresolved. We need an all-inclusive truth commission to work on this.”

Kurt said the PKK’s death toll from its feud with Hezbollah was much lower than the losses it suffered against the Turkish military. “If the PKK is ready to sit at the negotiating table in a settlement process with the state, why wouldn’t it talk to Hezbollah?” he asked.

The real trauma stems from the fact that Kurds killed Kurds, he said, adding that dialogue was possible under certain conditions.

“First of all, both sides use a very harsh language that affects their mental baggage. For Hezbollah, hatred against the PKK remains excessively at the foreground,” Kurt said. “I believe the two sides should talk. Having a direct channel [of dialogue], holding discussions on how to ensure calm is truly important. Tensions are currently running high, but this could well be the last darkness before dawn.”

He said that the HDP’s solid vote in the June 7 parliamentary polls meant the party could “do a lot” on the issue.

The HDP emerged with 13% of the vote from the elections. With this impressive outcome, Turkey’s Kurds moved a step closer to peace with Ankara and turned their face to legal politics with an amplified presence in parliament. The Kurds now face a major test. A rekindled strife between Hezbollah and the PKK will mean a return to one of Turkey’s darkest periods. Unless the parties commit themselves to restoring calm, all hopes for peace, including the PKK’s settlement process with Ankara, could go down the drain. Reconciliation appears to be everyone’s desire in the southeast. If Hezbollah and the PKK succeed in launching a dialogue, the Kurds will be taking a major step toward peace and heading off the risk of chaos in their region.