What caused the clashes in Diyarbakir? 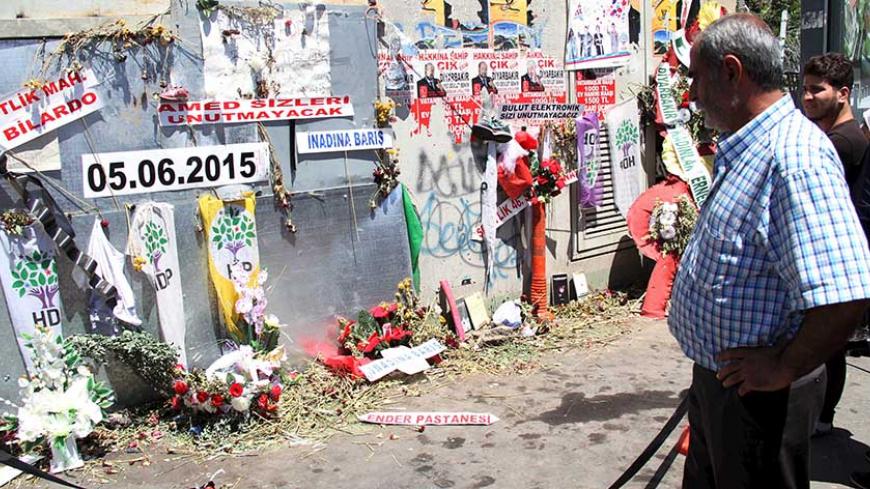 Soon after the bomb attack during a pre-election rally of the Peoples’ Democratic Party (HDP) in Diyarbakir, which killed several people and wounded more than 100, the chairman of a nongovernmental organization known for its Islamic ideology was assassinated. In what seemed a retaliation, three HDP partisans were killed also. At first glance, all this appeared to be a replay of yearlong clashes between the Kurdish Hezbollah movement and the Kurdistan Workers Party (PKK), but many suspect provocation from a third party.

On June 9, Diyarbakir was still celebrating the HDP’s election victory two days earlier. The tension that prevailed in the city during the election campaign had abated. But people's cheerful mood changed at 3 p.m. June 9, when six shots were heard in the Sehitlik neighborhood, disrupting the quiet that was prevailing after the boisterous celebrations the day before. The target of the assassination was Aytac Baran, who died at the hospital. Baran was the chairman of Yeni Ihya Der, a nongovernmental organization close to the Free Cause Party (Huda-Par), which is known to be affiliated with the Kurdish Hezbollah movement. The group immediately attributed political meaning to the murder.

Soon afterward an armed group appeared in the streets, and according to eyewitnesses opened random fire on businesses close to where the murder took place. Three HDP partisans were killed, some reportedly at their homes.

The Sehitlik neighborhood became a scene of hourlong clashes; police cordoned off the area and even ambulances could not enter to evacuate the wounded. Some journalists who were attacked by the armed mob were rescued by police firing into the air.

The fact that the fatalities had ties to Huda-Par and the HDP reminded people of the Hezbollah-PKK clashes that go back to December 1991. Had they taken up arms again?

The parties that were caught off guard were seeking an explanation. According to Huda-Par, the HDP was guilty and Baran's murder was committed either by the PKK or its armed urban extension, the Patriotic Revolutionary Youth Movement. The HDP reacted quickly, saying it had absolutely nothing to do with the murder and offered its condolences. When Huda-Par also eased its rhetoric and stopped accusing the PKK directly, many felt it must have been a provocation. The attack of some at their homes suggests premeditation. Although police apprehended three people suspected of killing Baran shortly after the incident, the tension in the street did not ease.

While clashes spread to other neighborhoods, both parties were trying to pull their partisans off the streets. The HDP, using all means of communication, called on its supporters not to use arms and to return to their homes. Huda-Par warned its supporters not to heed any calls made from sources other than the party, a reference to provocative calls on social media by unknown sources, which are now being investigated by prosecutors.

Despite the calls for calm, clashes took place throughout the night. Some were wounded by fire from unknown sources. The following day, the Sehitlik neighborhood was like a ghost town; shops remained closed and people stayed indoors. It seemed that most people believed the events to have been the result of a provocation, while only a small group blamed the PKK.

Selahattin Demirtas, the HDP co-chair, called attention to the earlier bombing at the Diyarbakir rally, and to the involvement of Syria, Turkey and the Islamic State (IS) in recent incidents. He said, "No one can come from Syria with a bomb in his hand and set off two blasts just at the moment I was to address the rally, unless he had official support. He must have received support. He must be found. My fear is that hundreds of IS-affiliated groups are in Turkey waiting for orders to attack. Many Hezbollah militants have been armed in Diyarbakir and elsewhere. They have their guns at home and they have already been told whom to hit in case they are attacked.”

Mehmet Kaya, the president of the Diyarbakir-based Tigris Communal Research Center, is among those who think provocation from an outside party was behind the incidents. He told Al-Monitor, "This is a provocation exploiting the segmentation of the Kurds. What they are trying to do is to show a major split among the Kurds between dedicated Muslims and others. I think it was the work of intelligence services. Who would benefit from it? Turkish intelligence can do it because they have political aspirations. Iranian intelligence can do it. I believe this is entirely the work of intelligence services."

Kaya also criticized a lack of reaction from the government and opposition parties.

Associate professor Vahap Coskun, a legal expert and member of the executive board of the Diyarbakir Institute for Political and Social Research, told Al-Monitor about the possibility of provocation being the cause of the incidents. Coskun said, “As long as there is animosity between the PKK and Hezbollah, some will take advantage of it. They will pitch Huda-Par against the HDP or Hezbollah against the PKK. It was important that the parties called on their people to remain calm, but it is not enough. I think HDP and Huda-Par leaders should come together and discuss their problems. They should openly declare that they don’t approve of any struggle that is not democratic. They should warn that as long as the fault line between the PKK and Huda-Par exists there will be people exploiting it.”

Funerals were held quietly and life appears to have returned to normal in Diyarbakir, but people are worried about new violence erupting.