Islamist and nationalist Kurds in Turkey have recently engaged in violent clashes stemming from events in Syria, raising concerns about the future of the Kurdish movement. 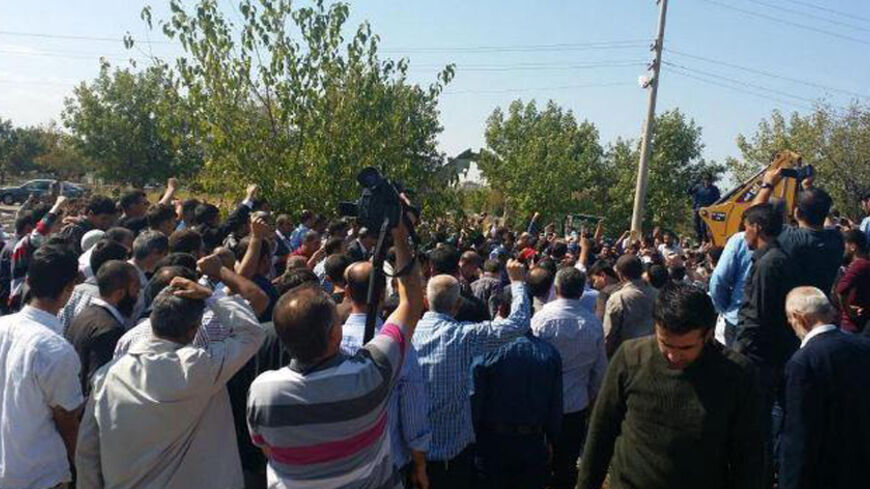 Supporters of the Sunni Islamist Huda-Par bury a member of their organization killed by fighters from the Kurdistan Workers Party during clashes between the two movements in this undated photo. - Twitter/@tryebakis

In Turkey, people primarily remember two organizations when recalling southeastern Turkey in the 1990s, when state authority had been badly eroded: the leftist and staunchly secular Kurdistan Workers Party (PKK) and the militant, Sunni Islamist Kurdish Hezbollah. Their bloody clashes left behind some 500 unsolved murders, many of them executions.

The scenes from recent violent street clashes in many parts of Turkey protesting the Islamic State (IS) siege of Kobani, across the border in Syria, and Turkey’s inaction toward it make one wonder whether PKK-Kurdish Hezbollah fighting might be on the verge of escalating. Armed violence between the Patriotic Revolutionary Youth Movement (YDG-H), the PKK’s armed youth wing, and Huda-Par, successor to Kurdish Hezbollah, have already resulted in fatalities that might bode ill for the Kurdish political movement. Huda-Par had been trying to become a political actor, steering clear of armed violence.

A call bound to escalate tensions between Huda-Par and the PKK appeared Oct. 7 through a Twitter account said to be belong to the YDG-H. It read, “To the attention of all our security units in Kurdistan and Turkey. Arm yourselves. Hezbollah-contra-Huda-Par members are to be executed wherever they are seen.” After the tweet, YDG-H members began attacking Huda-Par religious centers, associations and party premises in Diyarbakir, Batman, Bitlis and Siirt, where they are known to be strong. Huda-Par responded with arms, and the clashes intensified.

Diyarbakir Mayor Gultan Kisanak referred to Huda-Par’s use of arms as the “government's Plan B,” claiming that Huda-Par was counterattacking with the knowledge of the government and under the protection of the police. Meanwhile, Huda-Par spokesman Sait Sahin was quoted as accusing the PKK of trying to import the chaos of Syria into Turkey. He stated, “The government turned over the southeast to the PKK so as not to harm the peace process. In that vacuum, the PKK is extorting money and has set up its own courts. They dominate the region. When our party was attacked, nobody intervened for hours. If there is no viable state, then the citizens will implement their own security measures.”

There have been reports, especially out of Istanbul, that armed gangs of the PKK’s urban organization, the Kurdish Communities Union (KCK), have been pursuing and executing people thought to be Islamists, accusing them of being IS members, and attacking associations supporting the Syrian opposition.

A high-ranking official from the pro-Islamic Imkander association, which supports Caucasian immigrants in Turkey, told Al-Monitor on condition of anonymity that the KCK has been threatening leaders of Islamic organizations and Islamist opinion-makers and trying such people in KCK courts. The Turkish government, although allegedly aware of these actions, is not saying anything for fear of undermining the peace process with the PKK. On Aug. 30, a prominent Islamist was killed and two others were badly wounded in an operation in Istanbul claimed by YDG-H. The Kurdish news agency ANF reported the incident as an “execution of [IS] members.”

The course of developments and intensity of the violence going forward will depend on the reactions of the Islamist currents, especially Huda-Par's, to KCK attacks. Huda-Par Vice President Bahattin Temel, in a statement to the Hurseda news agency, which is close to Huda-Par, said, “Declarations by Islamist civil society organizations that they have no other choice but to arm themselves in legitimate self-defense in the face of PKK attacks tell us that the Islamic movements will not remain idle in the face of KCK attacks and will defend themselves.”

The Tevhid Journal, a prominent Salafist publication in Turkey, discussed PKK actions and the peace process in an editorial in its August edition: “These attacks are against Islam. Muslims should not be fooled, because these attacks are attributed to [IS]. The PKK has always seen Islam as an obstruction. Their attacks are aimed at the existence of Muslims. In such a situation, Muslims have to resist and defend.” The editorial was interpreted by Kurdo-Islamists as an open call for Salafist movements to resist KCK attacks.

What is interesting is that the PKK and Salafist movements in Turkey both accuse the government of complacency when it comes to the clashes between PKK supporters and Kurdo-Islamists. According to the PKK, the state is inciting the Salafists against it, enacting a new policy of persuading Islamist Kurds to fight revolutionary Kurds. On the other hand, as the police and judiciary have shown little interest in the events, the Salafist movements, as noted, accuse the state of ignoring the PKK's attacks on it to avoid damaging the peace process.

The question arises, why is the PKK attacking Islamist currents, including Salafist movements that do not support IS, notably Huda-Par? Although Kurdish politicians prefer to keep silent on this sensitive issue, Kurdish People's Democracy Party (HDP) parliamentarian Altan Tan made reference to it: “For the past few years, sinister forces have been persisting in igniting PKK versus [Turkish] Hezbollah and BDP [Peace and Democracy Party]/HDP versus Huda-Par wars. A PKK-Huda-Par war will be a disaster for the Kurds. All Kurds with a sane mind, no matter what they believe in, are duty-bound to put out this fire instead of pouring oil on it, and to stop sinister provocateurs.”