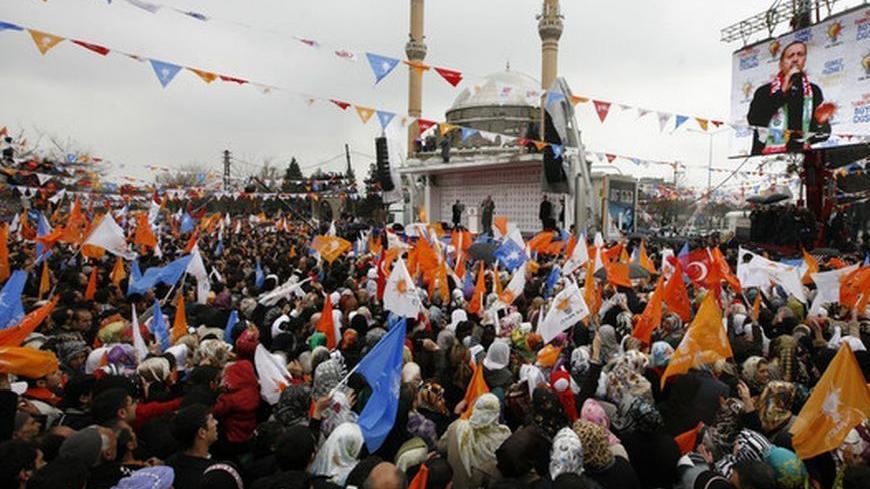 Turkey's Prime Minister Tayyip Erdogan delivers a speech as he campaigns ahead of the March 29 local elections in southeastern city of Diyarbakir Feb. 21, 2009. - REUTERS/Osman Orsal

A new party was established in Turkey, called Hur Dava Partisi, on Dec. 17. Its abbreviated name is more interesting, made up of the first syllables in the Turkish words hur (free), dava (cause) and parti to read "Huda-Par.” Huda is Persian-origin word used both in Turkish and Kurdish meaning "God." You can therefore think of this party’s name as the “Party of God,” just like Hezbollah.

Of course, when we say Hezbollah here we are not talking of the Shiite Hezbollah of Lebanon, but the Sunni Islamist Kurdish Hezbollah of Turkey.

Huda-Par and Hezbollah sharing a meaning is not a coincidence, but design. Huda-Par, now a legal political party, is a successor of the obscure and cruel organization of 1990s, the Sunni Islamist Kurdish Hezbollah. Huda-Par is the final phase of the evolution of the armed Islamist Kurdish movement since the beginning of 2000s.

We must note, however, that though this Hezbollah is Sunni, its establishment was influenced heavily by the Islamic Revolution and was very close to the Iranian regime in 1990s.

Here we have to add that 700 people were killed in the clashes between the mainstream Kurdish movement, the PKK and Hezbollah. Hezbollah was merciless against Islamist groups that were not a part of it.

Following security operations against Hezbollah in 2000, the Turkish public was shocked to hear that the organization had abducted more than 100 rival Islamists, tortured and buried them in what was dubbed a repugnant “houses of graves.”

Turkey knows Mehmet Huseyin Yilmaz, the founding president of Huda-Par, as the president of the former Association of Solidarity with the Mustazafs. (Mustazaf means “downtrodden, oppressed.")

Until closed down last May on grounds of “acting in concordance with the objectives of the Hezbollah terror organization,” the association popularly known as Mustazaf-Der provided the linkage and continuity between Hezbollah and Huda-Par.

For the Kurdish Hezbollah, the transformation to establish a legal political party called Huda-Par is a significant development that has to be considered in relation to Turkey’s Kurdish question and its implications for the region.

First of all, this Islamist Kurdish movement, after putting together the minimal structure required to participate in elections, will primarily be cutting into the votes of the Justice and Development Party (AKP) and the mainstream Kurdish political organization, the Peace and Democracy Party (BDP), in the 2014 local elections in the southeast. Huda-Par is likely to be more effective in some townships and cities than in metropolitan municipalities.

The Turkish public did not know about the support base of Hezbollah until the mid 2000s. In 2006 when Hezbollah, under the guise of Mustazaf-Der, organized mass meetings that gathered at least 50,000 people in Diyarbakir, it became clear that the organization had public support and had to be taken seriously.

In this situation, it can be assumed that in the southeast, Huda-Par will be plucking the most votes from the AKP’s constituency. After all, the AKP constituency in that region is made up of roughly the civil servants, security personnel, a weak Kurdish middle class and conservative Kurdish voters. We have to assume that within the conservative and religious AKP constituency, Hezbollah has a certain share and that under normal circumstances there people will be voting for Huda-Par.

In the emergence of a legal Islamic Kurdish party from within Hezbollah, as much as its distinctive and independent dynamics, a major trend also plays a substantial role. This can shortly be summarized as rapid divergence of the paths of Kurdish and Turkish Islamists.

An interview by journalist Rusen Cakir, an expert on Islamic movements who has been following the evolution of Hezbollah, with journalist Ali Akel, who is an Islamist Kurd, offers an insight to this trend.

Until last May, Ali Akel was a columnist for Islamist and AKP-supporter Yeni Safak. He was fired from his newspaper because he criticized Prime Minister Recep Tayypi Erdogan for not apologizing for the massacre of 34 young Kurdish smugglers in Uludere village by bombing from Turkish planes.

In the interview, published in VATAN on Nov. 30, this is what Akel said: ‘’Until the beginning of the 2000s, the prevailing notion was that the Kurdish problem would be solved when Muslims become the government. But the 10-year AKP governance proved that the Kurdish problem would not be solved with Muslims in power. Developments of last three to four years steered the religious segment of the Kurds to look for other options. This is based on two reasons: First of all, there is a general reaction to the AKP and it policies. Second, there is a reaction not only to political institutions but also to Turkish Islamists. According to Kurdish Islamists, the AKP and Turkish Islamist groups are equally statists.”

Everyone, including Ali Akel, who closely follows the evolution of the Kurdish issue in Turkey, agree that the Uludere massacre caused an emotional upheaval and a mental disassociation in the Kurdish opinion. Akel sees that as the straw that broke the camel’s back.

Meanwhile, the AKP’s suspension of the “opening to Kurds” and their hardening attitude to the mainstream secular Kurdish movement also negatively influenced the thinking of the religious Kurds. Here we must mention the arrests of 7,000 unarmed Kurds, including elected mayors, municipal council members, BDP staff and supporters on charges of membership in terror organizations and efforts to revoke the immunities of Kurdish members of parliament.

One example of this new approach is the “alternative Friday prayers” organized in the southeast, where sermons are given in Kurdish by Kurdish clerics. Huda-Par will most likely recover the votes of the religious Kurds who have been voting for the BDP there.

But Rusen Cakir thinks the votes Huda-Par will get from religious Kurds will be limited. According to Cakir, one reason for this is that Hezbollah has yet to give persuasive explanations for Hezbollah’s murders of other Islamists in 1990s. Moreover, Hezbollah has not given any assurances that it has given up arms.

The reality now is this: Unless Huda-Par is closed down by the Constitutional Court as being a disguise for Hezbollah, it, along with the BDP, is likely to fill the Kurdish vacuum created by AKP’s hard-line policies.

This all means the debate over whether Islam would be enough to keep Turkey together is likely to escalate.

Kadri Gürsel is a contributing writer for Al-Monitor's Turkey Pulse, and has written a column for the Turkish daily Milliyet since 2007. He focuses primarily on Turkish foreign policy, international affairs and Turkey’s Kurdish question, as well as Turkey’s evolving political Islam.