Deep-rooted strains between secular-nationalist Kurds and Islamist Kurds may reignite in the wake of the civil war in Iraq and Syria. 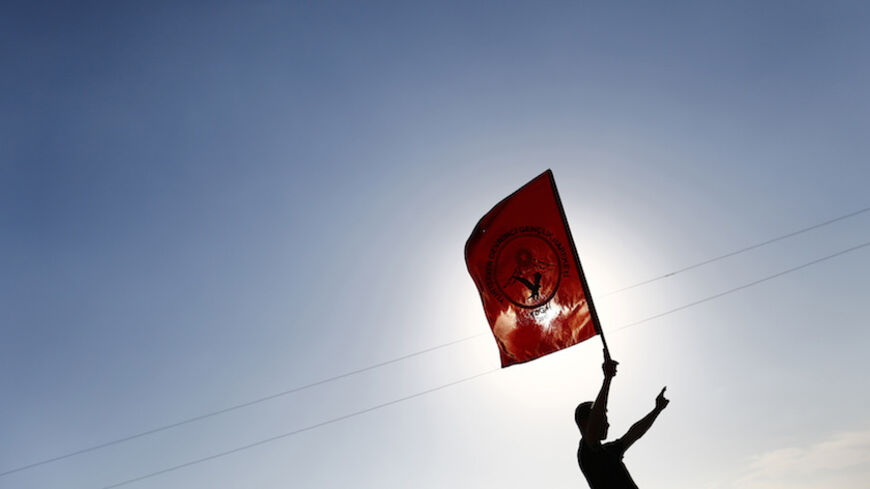 A boy holds the Kurdish PKK youth organization flag during the funeral of three Kurdish fighters killed during clashes against Islamic State in the Syrian town of Kobani, at a cemetery in the southeastern town of Suruc, Turkey, Oct. 24, 2014. - REUTERS/Kai Pfaffenbach

In the early hours of Dec. 27, armed clashes broke out in Cizre, a big town in Şırnak province in Turkey’s predominantly Kurdish southeast. Three people were killed, while many homes were hit by bullets. One of the clashing parties was the YDHG, or the Patriotic Democratic Youth Movement, which is known as the youth organization of the armed and outlawed Kurdistan Workers Party (PKK). The other party was Huda-Par, a party established by Islamist Kurds. Both sides claimed that the other side attacked first.

This was yet another episode in the ongoing tension between the secular-nationalists and Islamists within Turkey’s Kurdish population, which constitutes roughly 15% of the 76-million-strong nation. The first group is represented by the PKK, which has led a guerrilla war against the Turkish state, at times with terrorist tactics, since 1984. The PKK also has political organizations and is implicitly represented by political parties, the latest of them being the People's Democracy Party (HDP). Its ideology has strong leftist, even Marxist tones, which is not readily welcome by the more Islamist or traditional segments of the Kurdish population.

That is why the majority of Turkey’s Islamist Kurds have stayed away from the PKK and its political affiliates. In the past decade, many of them have voted for the incumbent Justice and Development Party (AKP). (That is why AKP spokesmen often claim to represent more Kurds than those represented by Kurdish nationalists.) The more hard-core Kurdish Islamists have set up their own parties, though, and the latest of them is Huda-Par, or “Free Cause Party,” which was founded in 2012.

The origins of Huda-Par go back to the 1990s, to the notorious “Kurdish Hezbollah” (no relation to the Hezbollah in Lebanon), which was a terrorist group that fought the PKK with brutal methods of assassination, kidnapping and torture. It was then widely believed in the southeast that the Kurdish Hezbollah was tolerated, supported or even created by the Turkish state as a rival to the PKK. In its own ideology, however, the Kurdish Hezbollah was merely defending the Islamic territory of Kurdistan against the domination by the PKK’s godless communists.

In 2000, conspicuously soon after the capture of PKK leader Abdullah Ocalan, Turkish police cracked down on Kurdish Hezbollah. Huseyin Velioglu, the leader of the group, was shot to death in a gunbattle with the police, and many others were arrested and put on trial. In 2002, the group announced that it ended armed struggle. Next year, its sympathizers opened the Society for Solidarity with the Oppressed, or Mustazaf-Der. In 2012, the same society created Huda-Par.

Given this history, it is only normal for the PKK and Huda-Par to detest each other: They have a history of violence. Yet still, since 2000, they had been in a cold peace. What heightened the tension recently is what is happening beyond Turkey’s southern borders. The conflict in Iraq and Syria between the Islamic State (IS) and Kurdish groups is influencing Turkey. While the PKK and its base clearly support the Iraqi peshmerga and Syrian People's Protection Units (YPG — the Kurdish party that defends Kobani), some Kurdish Islamists sympathize with IS or other jihadist groups such as Jabhat al-Nusra.

These conflicting sympathies have been expressed with conflicting recruitments as well. “Many of the Kurds in Turkey traveled to Syria to fight against [IS],” academics Gunes Murat Tezcur and Sabri Ciftci note in a recent Foreign Affairs piece, “but many others joined [IS] or other Islamist organizations.” In fact, as these scholars have shown, “Kurds are overrepresented” among the some thousand Turkish citizens who have joined IS or other jihadists. They, after all, live in a region that is used to armed struggles, and also lies right next to Iraq and Syria.

No wonder the recent clash in Cizre took place following the news that the body of a “martyr” from the town who died while fighting against IS in Iraq’s Sinjar region was about to be brought back for a funeral. This, probably, raised the anger among PKK supporters against “Islamists.” And even though Huda-Par has repeatedly denied any connection with IS, they can easily be put in the same basket. That is how Huda-Par members, and even simply men with beards, were put to death by pro-PKK militants during the bloody riots of last October. The government had to impose curfews in six provinces to end the clashes and restore order.

All this means that Turkey’s Kurdish population is divided and polarized in itself. There is no doubt that the PKK and its political arms constitute the dominant movement among Kurds, but Islamist Kurds also matter, whether they support the moderate AKP or the more hard-core Huda-Par. If the PKK achieves the regional autonomy it wants from the Turkish government, these divisions may well deepen and perhaps even lead to a civil war among Kurds.

In the face of all this fragile complexity, the AKP government is understandably troubled. Its heart certainly goes out to the more Islamist Kurds, including Huda-Par, but it also is engaged in a “peace process” with the PKK and does not want to reignite armed conflict with the militant group, especially in the wake of the upcoming general elections. That peace process indeed is commendable, but the government also needs to restore law and order in Kurdish provinces, and also avert the spilling of the Iraqi-Syrian civil war into Turkish territory. Acknowledging the real dynamics of the tension, rather than resorting to conspiracy theories about evil “provocateurs,” might be a good start.