A string of unresolved attacks against Kurds has raised suspicions that the Turkish government is training and recruiting jihadist militants from the Syrian conflict as paramilitary forces to target government opponents. 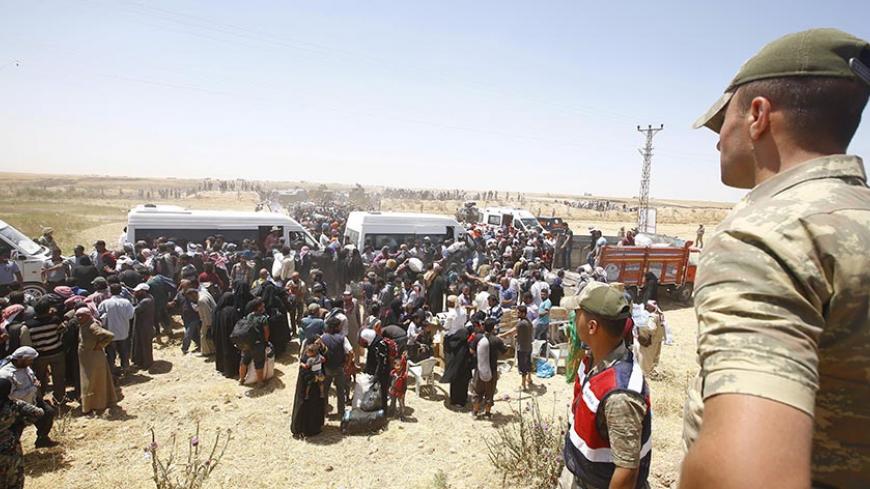 Turkish soldiers stand guard as Syrian refugees wait for transportation after crossing into Turkey from the Syrian town of Tell Abyad, near Akcakale in Sanliurfa province, Turkey, June 10, 2015. - REUTERS/Osman Orsal

In January, a deputy from Turkey’s main opposition Republican People’s Party (CHP) submitted an intriguing parliamentary question to the interior minister. Ali Ozgunduz wanted to know whether militants from Syria and Iraq were being trained in Turkey to be used in crackdowns on anti-government protest movements.

The written question, shown to Al-Monitor, began with the following introduction: “At a time when Turkey is already the subject of international debate … for [allegedly] providing weapons, logistical support and training to radical elements in the Middle East, among them the Islamic State [IS], allegations are being made through various platforms that certain militants have been brought to Turkey as well. Allegedly, those people are being given military training with the purpose of thwarting popular opposition movements like the Gezi Park resistance and violently suppressing such protests. The media have recently reported that Jamal Maarouf, a Free Syrian Army [FSA] leader who fought in Aleppo and had the complete support of the [Turkish] government, has crossed into Turkey together with most of his 14,000 armed elements. This lends credibility to the allegations.”

The former lawmaker then posed the following questions:

In an interview with Al-Monitor, Ozgunduz said he was still awaiting a response to his questions, although under procedural rules they were supposed to have been answered within 15 days of their submission.

A former prosecutor with knowledge of the criminal world, Ozgunduz stressed that militants inside Turkey would never go unnoticed by the state. “Such people cannot enter Turkey without the knowledge of the state. Even if they do, they cannot hide out for long,” he said.

“We have received information that these people have been receiving military training in certain camps. The FSA commander has already taken refuge in Turkey, and they [the government] are not denying it. Now, they have even been forced to acknowledge they have provided arms to these people,” Ozgunduz further stated. “But I suspect support has been given also to elements more radical than the FSA. I believe that elements of Jabhat al-Nusra and IS are present in Turkey and that the state is aware of them.”

Five months after Ozgunduz’s parliamentary question, on June 5 two bombs exploded in Diyarbakir, the largest city in Turkey’s mainly Kurdish southeast, during an election rally for the pro-Kurdish Peoples’ Democratic Party (HDP). Four people were killed and more than 100 injured.

Four days after the rally and two days after the HDP’s historic showing in the June 7 parliamentary elelctions, Diyarbakir was again the scene of bloodshed. The unrest began with the assassination of Aytac Baran, chairman of a local association and member of Huda-Par, a political party affiliated with the local Hezbollah, an outlawed Kurdish Islamist group with a history of a blood feud with nationalist Kurds. Within several hours, three HDP activists were shot and killed and six people wounded, including three journalists covering events.

After the bombing and the shootings, HDP co-chair Selahattin Demirtas issued appeals for calm to prevent further flare-ups. As for the perpetrators, the government has so far announced the arrest of one suspect in the rally bombings. Demirtas has charged that the suspect is linked to IS and has pointed an accusatory finger at the Turkish state.

“This young man was certainly not alone in carrying out the attack. Who provided help with contacts, collaborators and intelligence support from Gaziantep, Urfa and Syria? The case cannot be deemed resolved unless those issues are brought to light,” Demirtas said at a June 12 memorial for those killed in the Diyarbakir bombings. “No one can just cross from Syria and detonate two bombs at a venue where I’m scheduled to speak without support from within the state. The support of state-linked forces must be uncovered because [the incident] is IS-linked. At the local level, too, there are forces supportive of IS in the form of cells. I’m truly concerned that in hundreds of locations across Turkey, they are on standby, awaiting orders to act.”

Further, Demirtas described an alleged plot to rekindle the long-standing blood feud between Islamist and secular Kurds. In the days leading up to the unrest, he said, rumors had circulated that some 100 people were on the hit lists of either IS or the Kurdistan Workers Party (PKK). According to him, some individuals on the lists were officially notified of their inclusion by the police, including the slain Baran.

“Curiously enough, [Baran] was killed two days after the police warning,” Demirtas said. “Many Hezbollah militants in Diyarbakir have been armed and even told whom to hit in case they are attacked. So, as soon as the association chairman was killed, Hezbollah militants attacked four of our activists.”

To Ozgunduz, the involvement of paramilitary groups sounds plausible. “Paramilitary forces could be active in Diyarbakir. That’s possible. Huda-Par and HDP officials acted with common sense there. Otherwise, the region could have plunged into chaos,” he said.

Ozgunduz believes the government’s Syria policy is to blame. “If you keep a scorpion in your pocket, one day you'll get stung. That’s what Turkey is currently going through. You dispatch IS [to Syria] via Turkey, you provide them with logistical support, and it all blows back one day. I’m seriously concerned,” he said. At the same time, however, he played down suggestions that the government might have orchestrated the bloodshed in Diyarbakir, while raising the possibility of a foreign hand.

“The unrest in Diyarbakir puts the government in a tight spot, so government-controlled elements are unlikely to have been involved,” he said. “Yet, groups like FSA and Nusra are multinational terrorist organizations, and they are usually infiltrated by the intelligence elements of those nations. Foreign intelligence services — Middle Eastern and others — are no doubt active in Turkey’s southeast today. And drug addicts, for instance, are known to be in IS' ranks. You can get those people to do anything for you in return for drugs and money.”

Pointing to other instances of domestic unrest, Ozgunduz questioned the stick-wielding men who have appeared at street demonstrations since the 2013 Gezi Park events, chasing protesters alongside the police. “Who are these people? What are they after?” he asked. “I had once received information that some 5,000 IS militants of Caucasian origin were to be evacuated via Turkey. What happened with them? Did they go or not? Are they roaming around like time bombs? We don’t know. Such people can be easily used.”

In an additional criticism of the government, Altan Tan, a blunt-spoken HDP lawmaker from Diyarbakir, underscored that a string of violent incidents that targeted the HDP across Turkey ahead of the elections remained unresolved.

“Anyone could have been the perpetrator. I could easily count dozens of groups. The state’s duty is to find out which one. As long as [the attacks] remain unresolved, state institutions will remain under suspicion as accomplices,” Tan told Al-Monitor. “Simply capturing the perpetrator solves nothing,” he said, referring to the bombing of the Diyarbakir rally. “Who gave the man the order? How did he get the bomb? The state, with all its police, intelligence and prosecutors, has failed to provide answers to the public … There are certainly some paramilitary forces or some organizations involved. But to say which is up to the state.”