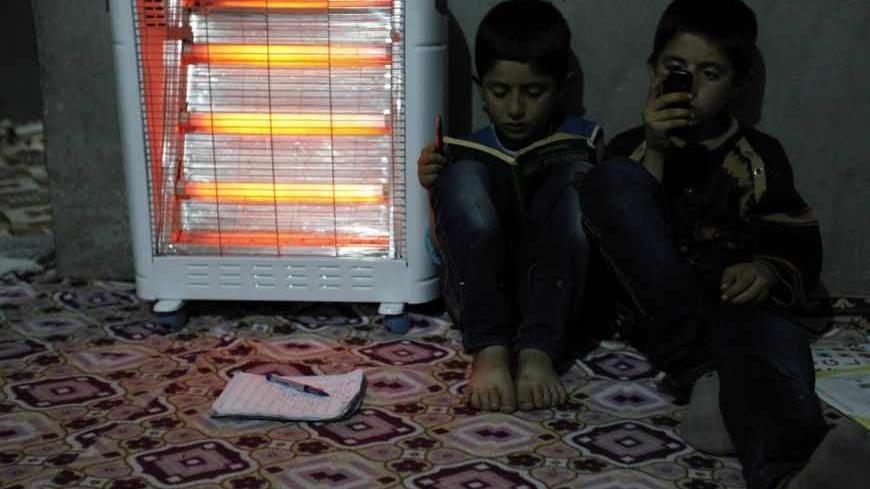 Six-year-old Abdurrahman and Osman, 10, read and chat in their home in Cizre, March 23, 2013. Turkey's fledgling peace process with the Kurdistan Workers Party (PKK) militant group is all over the headlines. - REUTERS/Umit Bektas

DIYARBAKIR, Turkey – Education in their mother tongue is a pivotal demand of Turkey’s Kurds, and peace talks between Ankara and rebel leader Abdullah Ocalan have raised hopes that it will materialize after decades of repression.

The government has so far given the cold shoulder to the demand, even though it has introduced Kurdish as an elective course in schools and launched university programs to train Kurdish language teachers. Many in Ankara worry that recognizing Kurdish as a language of education will broaden Turkey’s ethnic rift and play into the hands of separatists.

In the southeast, however, the Kurdish political movement and civic society have already mounted an all-out drive to enroot their language, bent on developing alternative education means and reviving Kurdish culture. Volunteerism is vibrant, with Kurds from all walks of life doubling as activists, teachers, writers or publishers. The Kurdi-Der Association, whose branches have mushroomed across the region, is leading a well-organized campaign to teach Kurds their mother tongue, which they were banned even from speaking until the early 1990s.

In Diyarbakir, the regional center, a civic foundation grouping prominent figures has launched a bid to establish Turkey’s first Kurdish-language university. Braving frequent confrontations with the courts, local administrations held by the Kurdish Peace and Democracy Party (BDP) promote the concept of “multi-language services,” and sponsor kindergartens and “education support houses,” where pupils are taught in their mother tongue.

Speaking at the inauguration of Kurdish-language philosophy, mathematics and physics classes at an “education support house” on March 29, the mayor of Diyarbakir’s Sur district, Abdullah Demirbas, conceded that the move transgressed the constitution, but stressed that Kurds were determined to use their rights regardless of what the law said. “At a time when the guns are to be silenced in favor of democratic politics, this method of ours should be seen as an effort to obtain our rights by ourselves. No one will give us peace and freedom on a plate. The way to win our rights is to use them,” local media quoted Demirbas as saying.

Kasim Birtek, the head of the Egitim-Sen teachers union in Diyarbakir, says the language mobilization shows that the Kurds are not just passively demanding their rights, but are simultaneously “building their institutions” for the future. He believes that no peace initiative will be convincing unless the right to Kurdish-language education is recognized.

“If the state takes that step, we will have prepared an infrastructure; if not we will continue on our way,” he told Al-Monitor.

Like Birtek’s own kids, many Kurdish children have grown up speaking only Turkish and learned their mother tongue in later years. Many Kurds, among them popular figures, remain alien to their language, especially in urban areas.

Cultural life has also flourished in Diyarbakir, a far cry from the days when even listening to Kurdish music was a clandestine affair. The city theater performs almost exclusively in Kurdish, boasting Hamlet in its repertoire. A municipality-funded conservatory offers Kurdish-language art classes to both children and adults. Youths meet in Kurdish-language cinema and philosophy clubs, and literary life is thriving.

Kurdish intellectuals, however, see a long way ahead to make up for the years of repression and note that many Kurds are succumbing to “auto-assimilation” in terms of language despite the newly found climate of cultural freedom. They worry that the current revival will eventually stagnate unless Kurdish becomes the language of education and academic study.

Lal Lales, a teacher who is also a published poet and heads a publishing house run by volunteers, says Turkey’s Kurds are yet to produce a thorough dictionary for their main dialect, the Kurmanji, and agree on some outstanding differences concerning grammar and spelling rules.

Kurdish writers and publishers today “keep going on by their own means. We need a linguistic institution to standardize the language and academic chairs to lead the discussions," he said.

Lales’ 9-year-old publishing house Lis is dedicated to multiculturalism and often prints bilingual books. Translations from Turkish literature and world classics make an important part of its output, but the number of professional Kurdish translators is still scarce. “Thanks to translations, we are discovering our own language. It is a must,” Lales said.

The chairman of the Kurdish Writers Association, Sexmus Sefer, observes that Kurdish authors are slowly breaking the tradition of political writing, which has been an essential part in the struggle for Kurdish freedoms. “Since people are no longer afraid to be Kurds, they are getting bored with political themes,” he said.

But the writers are yet to develop a universal language to reach out to wider, international audiences. “The maturing of a language depends on how free it is, on how much individuals can express themselves,” said the 35-year-old poet, who learned his mother tongue after high school. “If Kurdish fails to become the language of education, it will die away.”

Lales and Sefer are both confident that Turkey’s Kurds are the intellectual leaders of the Kurdish world and stand far ahead in espousing modern thought and openness to the West. “If the Kemalist ideology gave [Turkey’s] Kurds anything good, it was modern scientific thinking,” Lales said.

But the question of how they connect to their kin in Iraq, Syria and Iran to nurture a common cultural heritage also lingers as a problem with no easy solution at sight. The difficulties stem not only from physical separation but also the fact that Kurdish communities speak distinct dialects and use different alphabets. This means that even intra-Kurdish cultural exchanges often require translation.

The largest of the four communities, Turkey’s Kurds use a variant of the Latin alphabet, while the Iraqi Kurds, with whom they enjoy the closest ties at present, use the Arabic script. Moreover, the Iraqi Kurds speak not the Kurmanji but the Sorani dialect.

In intellectual brainstorming meetings on how to ease communication barriers, Turkey’s Kurds have floated the idea of a gradual transition to the Latin script in autonomous Iraqi Kurdistan. The idea, however, has received little support. “They [Iraqi Kurds] believe that a shift to the Latin script will cut their links with the past. This may be a justified argument, but it’s wrong in terms of integration with the world and Kurdish unity,” Sefer said.