Turkish President Recep Tayyip Erdogan’s plans to amass even more power have received a welcome boost from his ultranationalist rival, and a referendum on an executive presidency could be held as early as April, his lieutenants now say. 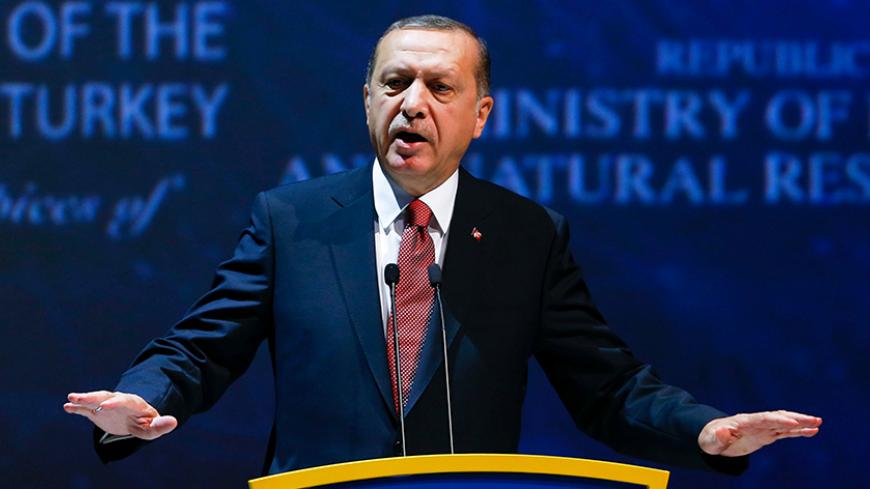 A key official in Turkey’s ruling Justice and Development Party (AKP) has announced that a referendum to change Turkey’s parliamentary system to an executive presidency may be held in April, fueling further debate about the merits of expanding the powers of the country’s authoritarian President Recep Tayyip Erdogan.

Deputy AKP chairman Hayati Yazici told the NTV news channel Oct. 19 that a package of constitutional amendments paving the way for a presidential system could be taken up by the parliament in January and put to a referendum in April. His comments came a day after Prime Minister Binali Yildirim told the parliament that his AKP was working on just such a bill.

Erdogan’s long-cherished dreams to formalize the sweeping powers he already exercises through the introduction of a “Turkish-style” executive presidency have faced a number of hurdles. The biggest is the shortfall in parliamentary seats held by the AKP. A minimum 367 votes are needed for the requisite constitutional changes to be passed by the chamber. And at least 330 are needed to put the proposed amendments to a referendum. With only 317 seats, the AKP needs the support of rivals to push the bill through. Last week, the far-right Nationalist Movement Party (MHP), which has 40 seats, signaled that it might ride to the rescue.

MHP leader Devlet Bahceli asserted that while he favored sticking with the current parliamentary system, his party would be prepared “to carry out to the letter whatever falls upon us [to assure] Turkey’s political and legal stability.”

In follow-up remarks this week about a possible referendum Bahceli said, “There is no problem asking the people.”

Only months ago, Bahceli had blasted Erdogan’s presidential ambitions, saying a presidential system would “inevitably lead to despotism.” Bahceli has sought to cast his volte-face as that of a statesman uniting behind democracy in the wake of the failed coup attempt in July. He has since championed Erdogan’s twin clampdowns on the Gulenists and the pro-Kurdish opposition. He has also backed the extension of emergency rule and Erdogan’s calls for Turkish intervention in Mosul.

While there is little question that Bahceli agrees with Erdogan’s steady shift from liberal reformer to aggressive nationalist, it is also true that he owes him a big debt. Erdogan helped Bahceli stave off a challenge to his nearly two-decade grip over the MHP from Meral Aksener, a feisty former interior minister. She nearly succeeded, rallying enough dissidents behind her to convene an extraordinary convention designed to give Bahceli the boot. But the Supreme Electoral Board ruled in favor of a legal counter-challenge mounted by the Bahceli camp, and Aksener was kicked out of the party instead.

Some say the board was acting under pressure from Erdogan, who saw Aksener as a potential rival as well. Pro-Erdogan screeds have since sought to paint Aksener as a cat’s paw for the Gulenists, and their daily musings about how presidential rule alone can fix all of Turkey’s problems appear to be having an effect.

Recent opinion polls suggest that support for Erdogan’s executive presidency may be growing, if only narrowly. One polling outfit that shared its findings with Al-Monitor on strict condition of anonymity said 43% of those surveyed backed the presidential system while 41% did not.

With most of the opposition media shuttered, the naysayers have few means to win over some 14% who say they remain undecided. In any case, what little debate exists “is not about a presidential system,” opined leftist academic Baskin Oran, but “about one-man rule.”