Turkey's president and now prime minister are speaking ever more boldly about reviving the death penalty despite the repercussions for the country's EU bid in what looks like a move to intimidate critics and also solidify the support of Turkish nationalists. 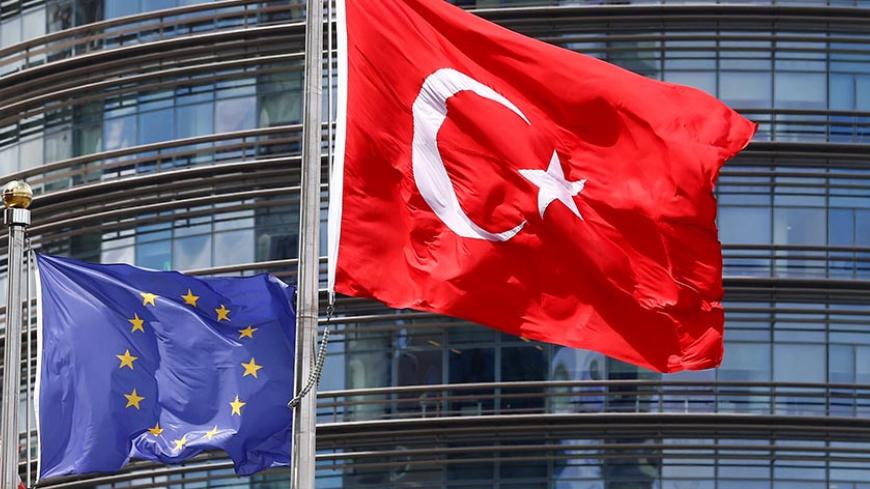 The European Union (L) and Turkish flags fly outside a hotel in Istanbul, May 4, 2016. - REUTERS/Murad Sezer/File Photo

Turkey’s already bleak chances of becoming a full member of the European Union dimmed further today after the country’s prime minister, Binali Yildirim, announced plans to reintroduce the death penalty. Yildirim said a “limited measure” to bring back capital punishment could be drafted if a political deal with the opposition parties could be struck.

Turkey’s most notorious political detainee, Kurdistan Workers Party leader Abdullah Ocalan, will be relieved to learn that if adopted, the measure would not be applied retroactively. Ocalan was sentenced to death for treason in 1999.

His sentence was commuted to life imprisonment after Turkey scrapped the death penalty except for in times of war. When President Recep Tayyip Erdogan’s Justice and Development Party (AKP) catapulted to power in 2002, the death penalty was abolished altogether in line with the government’s then-determined push to open full membership talks with the EU.

In recent months, Erdogan has repeatedly hinted that he would approve a bill to revive capital punishment and finally saying, “If such a bill comes before me I will sign it.”

It remains uncertain why Erdogan wants to bring back the death penalty when the EU has made it clear that doing so would kill Turkey’s chances of ever joining the union. This loss, in turn, could have a profoundly negative impact on Turkey's economy, driving away foreign investors who are already spooked by mounting political stability, terrorist violence and a lack of transparency and rule of law.

One theory is that the plans are intended to intimidate Erdogan’s critics. Another is that it’s meant to lure the opposition far-right Nationalist Movement Party (MHP), whose support in the parliament may prove critical for Erdogan’s other big plan: to amend the constitution to allow him to become an executive president. Any such bill, packaged with the revival of the death penalty, which the MHP is believed to be largely in favor of, may prove difficult to resist. It would certainly make it easier for the MHP's Chairman Devlet Bahceli, who fought off a leadership challenge earlier this year, to sell the idea of formalizing Erdogan’s grip over all the levers of power to his party base.

Bahceli made his intentions clear today, saying, “Since there is a need for capital punishment, bring your proposals and let’s show these traitors how small the world is to them.”

Any constitutional change requires the support of at least 367 members of the 550-seat assembly. The AKP has 317 and the MHP has 40, leaving it short of an absolute majority but still enough to bring the proposal to a referendum.

A recent privately conducted opinion poll suggests that Erdogan would win a referendum on an executive presidency, even though most Turks prefer to stick with a parliamentary system. The same poll, which was not intended for publication and shared with Al-Monitor on condition of anonymity, also revealed that the massive purges and arrests in the wake of the July coup attempt have not dented Erdogan’s popularity. If anything, it has surged with around 54% of those polled saying they approve of his leadership style.

by Murielle KASPRZAK and Joseph SCHMID | AFP | May 26, 2022
END_OF_DOCUMENT_TOKEN_TO_BE_REPLACED