Is Erdogan really serious about bringing back death penalty?

A leading expert argues that by signaling his keenness for the death penalty, Erdogan is merely engaging in “cheap populism.” 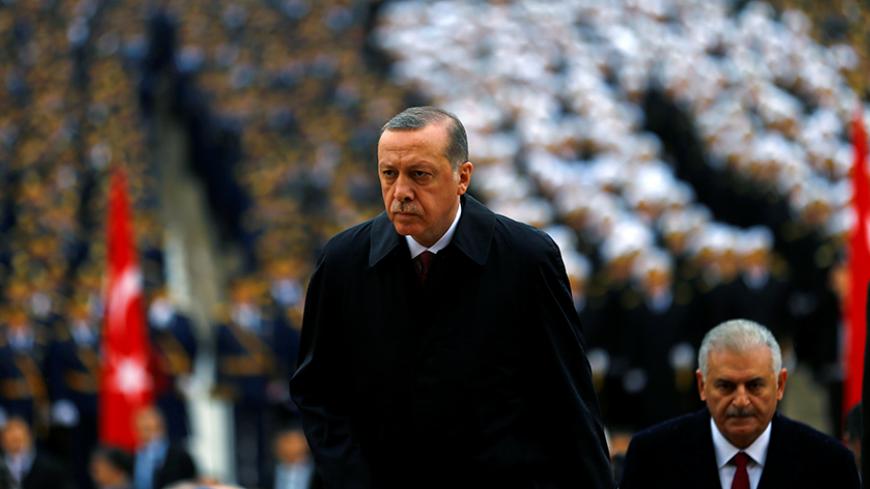 President Recep Tayyip Erdogan continues to respond to calls from his supporters for the plotters of the July 15 attempted coup to receive the ultimate punishment, and he is signaling his keenness on seeing the death penalty reinstated in Turkey.

It is not clear, though, whether he is doing this for its own sake or if he is using the topic to increase his support base as the debate on changing Turkey from a parliamentary system to an executive presidency gathers steams.

Turkey, a Council of Europe member and a signatory to the European Convention on Human Rights, abolished the death penalty in 2002, except in times of war. It subsequently abolished it in times of war in 2003, under Erdogan as prime minister, which is ironic from today’s perspective.

He said the government would bring it to parliament soon, and he expressed his belief that it would pass. “And when it comes before me, I will endorse it. Why? Because the people will get what they want,” he said, adding, “Sovereignty belongs to the people.”

Responding to journalists later in the day, during his Republic Day reception in Istanbul, Erdogan reiterated his support for the death penalty.

“I believe it is not right to delay this any longer, because there is a demand from the nation,” he said. “I believe parliament will pass this in the most appropriate manner, because we know that the death penalty is implemented in the larger part of the world.”

When asked about this, Erdogan signaled his indifference toward the EU. He questioned whether the EU could give back the 246 people killed by the coup plotters or those killed fighting terrorism.

“Decisions by the EU are not unalterable for us. Let’s first look to see how much of the world the EU corresponds to,” Erdogan said, citing the United States as an example of a country where the death penalty exists.

Talking to reporters during the Republic Day reception, Prime Minister Binali Yildirim was more cautious. He said the Justice and Development Party (AKP) could not reintroduce the death penalty without a broad consensus in parliament. He nevertheless acknowledged that there was a public demand for this penalty and said the AKP would make an effort to secure this consensus.

Murat Yetkin, the editor-in-chief of Hurriyet Daily News, detects a shift in Yildirim’s position on the topic, despite his apparent lack of enthusiasm immediately after the failed coup attempt for reinstating the death penalty.

“This shows that the death penalty was discussed at the highest level in the AKP, and like other topics, such as introducing a presidential system, Erdogan emerged victorious from the debate,” Yetkin argued in his column.

Yetkin also referred to claims in Ankara that Erdogan was pursuing this matter for tactical reasons. “There are claims that Erdogan is trying to make the death penalty an article of the new constitution, which will also enable the transition to a presidential system, and is trying to guarantee the support of the Nationalist [Movement] Party [MHP] [for a presidential system],” Yetkin said.

The right-wing MHP wants the death penalty to be reinstated, especially against members of the outlawed Kurdistan Workers Party (PKK) and its leader, Abdullah Ocalan, who is in prison in Turkey. Ocalan received the death sentence after his arrest in 1999, but this was commuted to aggravated life imprisonment when the death penalty was abolished.

The MHP, which was a member of the ruling coalition at the time, was forced by political circumstances to accept the lifting of the death penalty, but this never sat well with its ultra-nationalist constituents.

Addressing his party’s parliamentary group Oct 31, MHP leader Devlet Bahceli reiterated that they were more than ready to support the AKP if it was genuinely serious about bringing back this penalty.

Detecting in Bahceli’s words a political challenge to his party, Yildirim told his own parliamentary group the next day that the matter was a constitutional one that required the cooperation of all parties in parliament.

“We are not in a position to close our ears to demands [for the death penalty], but it has to be known that we can’t do this on our own, and that if reintroduced, it will not be retroactive,” Yildirim said.

There have been calls from other groups to reinstate this penalty, especially in cases involving child abuse, honor killings or the killing of women, but these have not translated into a coordinated campaign. Many seem satisfied with life imprisonment without parole for such crimes.

At any rate, no executions took place in Turkey after 1984, even though the death penalty was in force. Executions required parliamentary approval, and many deputies were reluctant to provide this after the return to civilian rule following the Sept. 12, 1980, coup. Courts under the tutelage of the ruling junta then had executed 50 people, mostly on political grounds.

However, government supporters believe that there is a need for this penalty today in order to deter backers of the PKK and Fethullah Gulen, the Islamic cleric accused of masterminding the July 15 plot.

Bulent Orakoglu, a former police chief who headed an anti-terror squad in the 1990s, goes a step further and claims that the West forced Turkey into abolishing the death penalty in order to protect its interests.

“It is clear that Europe and the US, who openly support terrorism, forced the Human Rights Convention on other countries in order to protect their agents,” Orakoglu reasoned in his column in daily Yeni Safak, which is pro-Erdogan and staunchly anti-Western.

Yetkin declared that reinstating the death penalty would place Turkey politically and economically in a different and qualitatively lesser league of nations. “We don’t deserve this,” he argued.

Riza Turmen, a former judge on the European Court of Human Rights and a current CHP deputy, said bringing back the death penalty would not only end Turkey’s EU bid, but also endanger its 67-year Council of Europe membership.

“Moving in that direction will raise questions about Turkey’s commitment to Western values,” Turmen told Al-Monitor. “It will also mean Turkey is severing its ties with the West,” he added.

Echoing Yildirim, Turmen pointed out that even if the death penalty was brought back, it would not be retroactive. It would not apply to those arrested for allegedly planning and executing the July 15 attempted coup.

“Under the European Convention and our own constitution, a new law cannot apply to crimes committed before its introduction. To make a new law retroactive is inconceivable,” Turmen said.

Turmen said Erdogan’s legal advisers know this and argued that Erdogan’s support for the death penalty is, at the end of the day, “no more than cheap populism.”