Turkish nationalist Meral Aksener is emerging as a real threat to President Recep Tayyip Erdogan as talk swirls about the formation of her new centrist party. 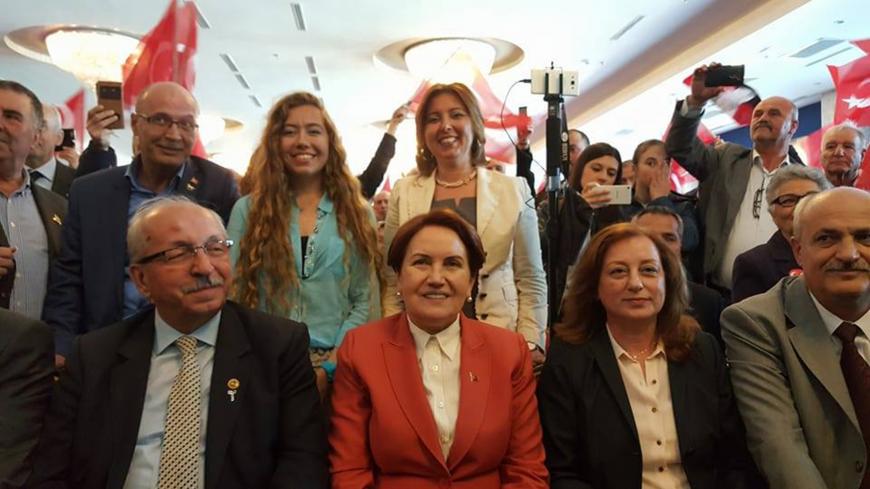 Turkish politician Meral Aksener (C), who is being touted as a possible challenger to President Recep Tayyip Erdogan, attends an event in Tekirdag, Turkey, in this undated photo. - Meral Aksener

Meral Aksener, a Turkish nationalist who is being touted as a possible challenger to President Recep Tayyip Erdogan, has defined the contours of the battleground where she will wage her campaign: the center.

One of her top lieutenants, Koray Aydin, announced in a television program aired last night that the party she is planning to launch before year-end will likely be christened the “Center Democratic Party.” This is the clearest signal yet that the combative former interior minister will not rely on a strictly nationalist platform. Following in the footsteps of Erdogan and his Justice and Development Party (AKP) and the late Turgut Ozal and his Motherland Party of the 1980s, Aksener will seek to assemble assorted conservatives, nationalists and disgruntled Islamists around the political center.

According to Kemal Can, a leading commentator on Turkey’s nationalist movement, Aksener knows she cannot succeed if she limits herself to seeking to appropriate the platform of the far-right Nationalist Movement Party (MHP) and its base. Aksener, a former MHP deputy, was pushed out of the party after leader Devlet Bahceli quashed her bid to replace him. Hundreds of MHP officials have since defected to Aksener.

Aydin disclosed last week that Aksener would likely run against Erdogan in the presidential election in 2019. Whoever wins will be endowed with the sweeping executive powers bestowed by the package of constitutional amendments that were narrowly approved in a fraud-tainted referendum on April 16. Turkey’s ongoing shift from a parliamentary democracy to what critics charge amounts to a dictatorship has transformed the political landscape and Turkey’s ineffectual opposition is scrambling to catch up.

Armed with emergency rule that lingers in the wake of last summer's failed coup, Erdogan is already exercising many of the powers that are meant to kick in after the next presidential poll. Using the putsch for cover, he has ruthlessly set about defanging his opponents and few doubt Aksener faces the same. Her experience in government, conservative family values and reputation for decisiveness and probity pose a real threat as a growing number of Turks yearn for stability and the rule of law.

Social media accounts managed by Erdogan’s inner circle have already begun slandering the handsome 60-year-old, whose supporters call her “Anaturk” or “Mother of the Turks.” It's a play on “Ataturk” or “father of the Turks,” as the country’s founder Mustafa Kemal was known.

AKP trolls continue to propagate the myth that she is part of the network of Fethullah Gulen, the Pennsylvania-based Sunni Muslim cleric who is accused of orchestrating the botched coup. Prominent pro-Erdogan commentator Omer Turan claimed in a tweet that an incriminating file about Aksener will soon be made public. Others have stooped so low as to suggest that the Gulenists have a “sex tape” with which to secure her obedience.

These are early days and Aksener’s chances of dethroning Erdogan, whose political genius has kept him in power for the past 15 years, are far from assured. What, if for example, Erdogan ditches his informal alliance with Bahceli and decides to woo the country’s fastest growing demographic, the Kurds? Aksener, who was interior minister in 1996, at the height of state-sponsored violence against the Kurds, is unlikely to draw their votes.

How large a chunk of the AKP’s traditional voter base can she bite off? Will the main opposition pro-secular Republican People’s Party endorse her candidacy? Its leader Kemal Kilicdaroglu has suggested he might, provided that Aksener restores the parliamentary system. More critically, will Erdogan push for early presidential elections to nip her campaign in the bud? Some of the fog may begin to clear when Aksener formally launches her party.