A nationalist politician who's already attracted plenty of attention as a potential challenger to Turkey's president has officially formed her new Iyi Parti. 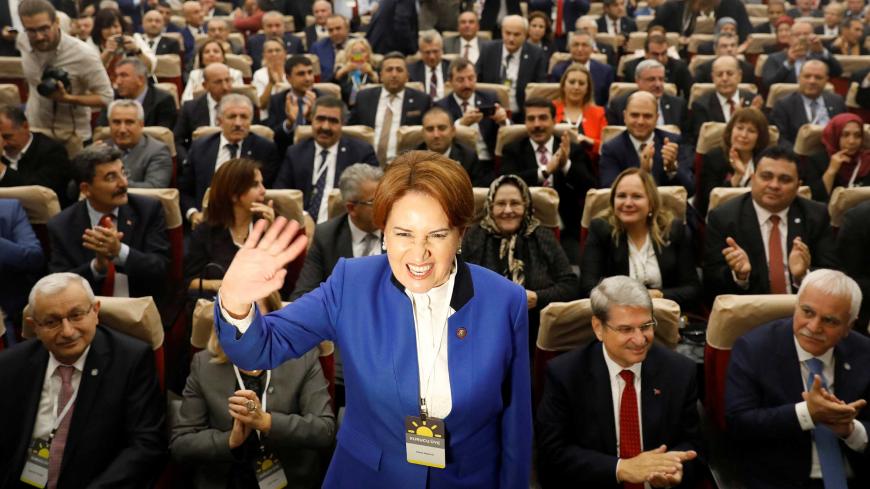 A nationalist female politician who is being touted as a potential rival to Turkish President Recep Tayyip Erdogan has finally launched her party, calling it Iyi Parti, or “Good Party.”

“Turkey is weary, the nation is weary, the state is exhausted,” Meral Aksener said in an address to throngs of supporters in the capital Ankara yesterday, "There is no other way [for Turkey] than a change."

Whether her party can deliver results worthy of its name is a matter of heated debate. Presidential and parliamentary elections are scheduled to be held in November 2019, when an executive presidential system that was approved in an April referendum kicks in.

Aksener, a folksy former interior minister, confirmed yesterday she will run for president against Erdogan, who remains a redoubtable foe. The results of a September opinion poll that was seen by Al-Monitor suggest that he commands the support of some 49% of voters and that 20% of them are nationalists.

Aksener’s success in a likely second-round runoff against Erdogan hinges on several factors. She needs to swallow the ultra-right Nationalist Movement Party (MHP) she broke away from. Yet she needs to plant herself firmly in the center right, which will be critical to lure voters away from Erdogan’s conservative Justice and Development Party (AKP) as well as first-time voters and women, who would likely tip the balance. She also needs the main opposition Republican People’s Party to back her in a second round of balloting.

Aksener’s team so far largely consists of crusty middle-aged male conservatives. They include a scandal-tainted former public works minister and a notoriously anti-Armenian historian. The gallery of pro-establishment has-beens has spurred widespread skepticism as to whether she is up to the task.

Suat Kiniklioglu, a former AKP parliamentarian and a senior fellow at the Institute for Security and Development Policy, argued in a series of tweets that it’s too early to write Aksener off. He noted, “The harsh reality is that at the moment it is only Turkey’s nationalists who have the local legitimacy to fight Islamist authoritarianism.” Kiniklioglu was referring to the stifling repression unleashed by Erdogan and his fellow Islamists that has dramatically escalated since last years’s failed coup.

Kemal Can, a respected expert on Turkish nationalism, observed that Aksener is acting with caution. Her messages are about re-establishing order, not shaking it up. “Just as when she was challenging [Devlet] Bahceli within the MHP, Aksener is seeking … to remain within the confines of [presenting herself] as a new actor rather than proposing a new political line,” Can wrote in his column for the online news portal Duvar. This strategy of opportunism could make Iyi Parti an attractive option for potential AKP defectors, he argued.

Iyi will face its first real test in the municipal elections that are due to be held in March 2019.

Erdogan and his party built their sprawling base in big cities like Istanbul, Ankara and Bursa, modernizing infrastructure and creating patronage networks among the steady flow of new economic migrants from rural Anatolia. Erdogan first made his name as the metropolitan mayor of Istanbul who ended the megapolis’ acute water shortage and garbage disposal problems.

Thus it came as a huge shock when all three cities voted against the presidential system he designed for himself that essentially concentrates full power in executive hands in a narrowly won referendum held in April. Erdogan has since set about shaking up the party’s local branches, firing hundreds of officials. He forced longtime Istanbul Mayor Kadir Topbas and Bursa Mayor Recep Altepe to step down. Melih Gokcek, who has governed Ankara since 1994, said he will retire on Oct. 28. Further sackings of popularly elected AKP mayors are expected to follow.

by Murielle KASPRZAK and Joseph SCHMID | AFP | May 26, 2022
END_OF_DOCUMENT_TOKEN_TO_BE_REPLACED