This woman may be biggest opposition to Erdogan

Meral Aksener, a rare female heavyweight in Turkish politics, may be the long-awaited leader to thwart Erdogan’s authoritarian ambitions. 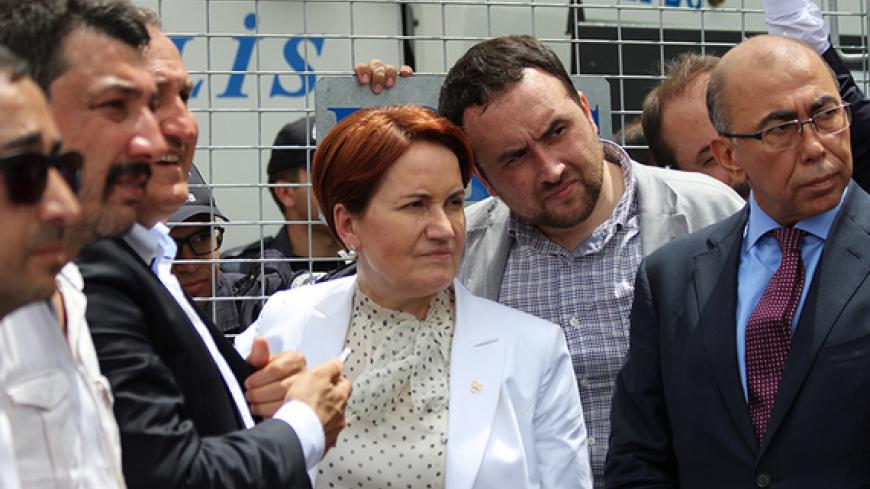 Meral Aksener (C), former interior minister and lawmaker from the Nationalist Action Party, stands before security barriers as police seal off a hotel, preventing dissidents from holding a party congress, in Ankara, May 15, 2016. - REUTERS/Tumay Berkin
Sukru Kucuksahin
May 26, 2016

After weeks of uncertainty and foot-dragging, the Appeals Court this week made a critical ruling, setting the stage for a potential shakeup in Turkish politics that may block President Recep Tayyip Erdogan’s drive for an executive presidency. The court gave the green light for the Nationalist Movement Party (MHP) to hold a convention requested by in-house dissidents seeking to remake the party, whose erosion in recent years has played directly into Erdogan’s hands. Leading the dissidents is Meral Aksener, a rare female heavyweight on Turkey’s political scene, whose fortunes may now change not only the MHP’s but also Turkey’s course.

The MHP, currently the smallest party in parliament, has traditionally been an influential force in Turkish politics — although it has never passed the 20% mark in elections, even in the days of its iconic leader, Alparslan Turkes, an army officer who was a leading figure in the 1960 coup and who chaired the party until his death in 1997.

Turkes was succeeded by Devlet Bahceli, the incumbent chairman in the crosshairs of the in-house mutiny. After his electoral debut as party chairman in 1999, Bahceli joined a three-way coalition, led by the center-left Democratic Left Party of then-Prime Minister Bulent Ecevit. This unlikely partnership managed to undertake a number of landmark, even revolutionary, initiatives for Turkey, including major constitutional amendments. Most remarkably, the MHP went beyond itself to endorse the suspension of the death sentence for Abdullah Ocalan — the leader of the Kurdistan Workers Party — as well as legal reforms that eased restrictions on the Kurdish language. Braving the political risks, Bahceli argued the measures served the long-term interests of the state. He was also credited for pulling young nationalists from the streets after years of bloody clashes between the left and the right.

But his political courage aside, Bahceli is perhaps best remembered for precipitating two early elections that swayed Turkey’s course.

In 2002, when the Justice and Development Party (AKP) was still in its nascent days, he called for early elections, arguing a plan was underway for a new coalition without the MHP. The surprise call, which he made at a mountain festival, sealed the end of Ecevit’s coalition government just as it had begun to overcome a tumultuous period, marked by the devastating 1999 earthquake in Turkey’s industrial heartland and a severe economic crisis. The bitter pills prescribed by Kemal Dervis, brought in from the World Bank to rescue the economy, had slashed the 70% inflation by half and stabilized the banking sector. Election time was a year and a half away, and voters had yet to feel the positive impact of the austerity measures. (Of note, the AKP would later build on Dervis’ program to reduce inflation to single digits and boost economic growth.)

Turkey eventually held elections in November 2002, in which all three coalition partners failed to pass the 10% threshold to enter parliament. The fledgling AKP clinched the majority, embarking on a long stint in power.

After the MHP returned to parliament in 2007, Bahceli continued to make moves that helped the AKP at critical junctures, including Abdullah Gul’s tumultuous election to the presidency. As a result, he came to be seen as the man who smooths the way for the AKP, a reputation he only reinforced after the June 7, 2015, elections in which the AKP lost its parliamentary majority.

Mustering 60% of the vote, the three opposition parties had finally clinched the chance to end the AKP’s 13-year rule. But only hours after the results came up, Bahceli dampened the hopes of exhilarated opposition voters, delivering his second big electoral favor to the AKP. He closed the door to a possible coalition and said he was ready for another early election, shocking the entire country but mostly his own ranks.

His decision meshed perfectly with Erdogan’s strategy, which succeeded in forcing new elections on Nov. 1. The AKP reclaimed its strong majority in parliament, while angry voters punished Bahceli, giving him only half of the 80 seats he had won in June.

In the process, Bahceli sidelined Aksener from parliament, keeping the MHP’s rising female star off the election ticket. This only boosted her popularity and encouraged her to lead the intra-party rebellion. According to an April survey by the MetroPoll polling company, only 16% of MHP voters stood behind Bahceli, while about 80% demanded change, including 68% who favored Aksener as their new leader.

The dissident camp was thus emboldened to press ahead, enlisting enough support from party delegates to call an extraordinary convention to amend the party charter and pave the way for the election of a new leadership. But Bahceli snubbed the call, sparking a legal battle that saw the two sides shuttling between courts. Conflicting rulings by the judiciary deepened the controversy, and the date initially set for the convention — May 15 — passed by amid mounting tensions. Police sealed off the hotel booked for the event, turning back thousands of party delegates.

The Appeals Court where the dispute was taken announced its decision in favor of the dissidents a whole week after May 15, reinforcing misgivings it is under political pressure.

The whole process, however, only boosted sympathy for Aksener and further discredited Bahceli. Acting in tandem with three other contenders for the MHP leadership, Aksener has now emerged as a hope for opposition voters that the AKP is not without an alternative.

Upon the Appeals Court ruling, Bahceli had a sudden change of heart, himself calling for a convention with leadership elections. The dissidents, however, insist the convention should deal only with amending the charter in line with their original call and the court decision, leaving elections to a later date. Their caution stems from concerns that any legal irregularity may derail their drive and that Bahceli may use his current clout to influence the outcome. As a condition to accept his appeal, they have challenged Bahceli to resign from the party chairmanship.

Though the wrangling goes on, the in-house opposition stands a strong chance of ultimately winning the battle. An MHP led by Aksener is expected to come up with new openings to woo voters looking for an alternative to the AKP. Her MHP is likely to take strong stands in favor of democracy, political moderation, EU membership, openness to the West and a retreat from the dead end Turkey has reached in the Middle East, while hardening opposition to Erdogan and his ambitions for an executive presidency.

With such openings, she is likely to woo primarily voters who share the AKP’s conservative and nationalist leanings but are unhappy with the government’s course, in addition to nationalist-leaning voters in the social democrat camp. If it materializes, this scenario would effectively block Erdogan’s plan for an executive presidency as the AKP would stand no chance of increasing its parliamentary majority to pass the constitutional amendment Erdogan wants.

The MHP is on an irreversible path. Though it may take as many as three conventions to secure the change, the party appears poised to significantly strengthen its political clout.

And what is most remarkable, it is a woman leading the way as perhaps the best hope for Erdogan opponents to change the balance of power and undo the prospect of Turkey shifting to an authoritarian presidential regime. If she succeeds, she would no doubt make history and prove that neither judicial nor government power can stop a leader whose time has come.