How long can Erdogan’s alliance survive?

Despite Turkish President Recep Tayyip Erdogan’s re-election last week, his party’s failure to secure an absolute majority in parliament has complicated the picture, leading many to believe that Erdogan would look for ways to achieve full control of the legislature. 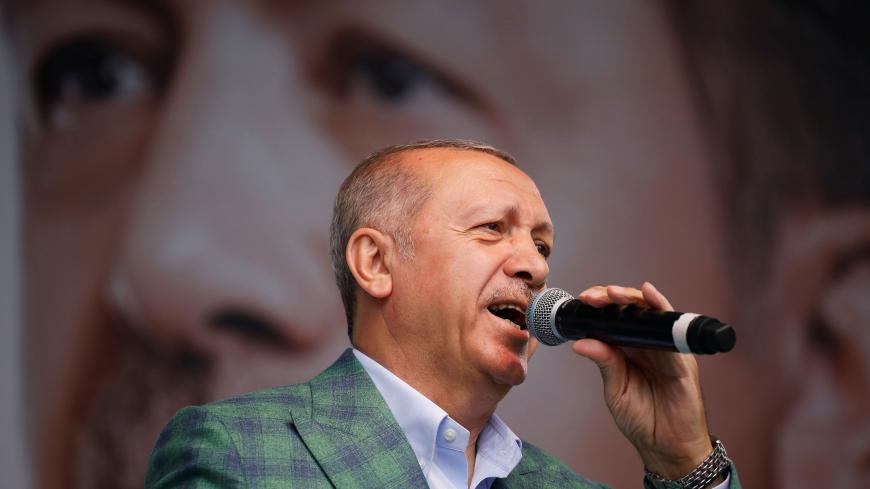 Ruling alone without the need for coalitions has always been a major election mantra of Turkey’s Justice and Development Party (AKP), which maintains that coalitions present risks to political stability and snag expeditious decision-making. The party has managed to rule the country alone since it came to power in 2002. In the June 24 polls, which marked Turkey’s transition to an executive presidency, the AKP’s founding leader, President Recep Tayyip Erdogan, won re-election with 52.6% of the vote, assuming sweeping powers under the new governance system.

Yet the AKP failed to secure an absolute majority in the 600-seat parliament, meaning it will have to acquiesce to a sort of a “covert coalition” to pass laws. In the November 2015 elections, the party mustered 49.5% of the vote and secured 317 seats in parliament, which at the time had 550 seats. On June 24, the AKP won 42.5% of the vote and 295 parliamentary seats, falling just short of the 301 seats needed for a majority.

The outcome positions the far-right Nationalist Movement Party (MHP) as a natural coalition partner of the AKP. The MHP, which contested the elections in an alliance with the AKP and backed Erdogan’s re-election bid, got 11.1% of the vote and 49 parliamentary seats.

During the campaign, however, the two parties showed they are not in perfect unison, including on major issues such as the state of emergency, in place since the botched coup attempt in July 2016. MHP leader Devlet Bahceli maintained that the emergency rule should continue, though Erdogan signaled it will not be extended beyond July 19, when the latest six-month extension expires. Also, Bahceli persistently called for a wide amnesty for many prisoners only to receive firm rejections from government ranks.

In their first post-election meeting June 27, Erdogan and Bahceli agreed on ending emergency rule, but Bahceli appears to have extracted a major concession in return. The two sides will reportedly consider amendments to the anti-terror law, the internal security law and the penal code that would compensate for the lifting of emergency rule — in other words, effectively make its conditions permanent.

The deal appears to be a sign of the modus operandi between the two partners in the coming period. Simply put, on issues where the MHP has red lines, the AKP will have to make concessions to achieve what it wants.

Ahead of his meeting with Erdogan, Bahceli dismissed a senior party official who had challenged Erdogan and the AKP, making an important gesture to show he wants a harmonious relationship in the next five years. Boasting of the kingmaker’s position the MHP obtained in the polls, the party’s deputy chair, Sefer Aycan, had said, “The MHP will be the one to [shape] politics in parliament from now on. We will be the ones to dictate what happens. The MHP is in a key position in parliament today, and the MHP has salvaged both Erdogan and the AKP.”

During the bilateral meeting, Erdogan and Bahceli agreed to create a permanent national consensus commission to work on ironing out differences between the two sides.

Yet, despite the mutual will for concord, Erdogan is averse to sharing power. As the leader of the AKP, he has never been in the opposition or had a coalition partner, and his party has always been strong in parliament.

Now Erdogan is equipped with far-reaching executive powers, but his party is without a majority in parliament, leading many to wonder whether history will repeat itself. Could Erdogan call early elections in the fall in a bid to boost his parliamentary support and end the pressure to get along with the MHP or some other party?

Atilla Sertel, a lawmaker for the main opposition Republican People’s Party, believes the AKP and the MHP will inevitably fall out. “The MHP and the AKP cannot walk together for long. This would not be good for Turkey either. That is why I think there will be early elections,” he said.

Yusuf Halacoglu, a prominent member of the opposition Good (Iyi) Party, believes Erdogan will seek other ways to shake off his dependence on the MHP, namely that he will try to get lawmakers from other parties to transfer to the AKP so the AKP can secure a parliamentary majority.

Aslan said in a TV interview, “The Justice and Development Party needs only a handful of lawmakers to pass laws. It could get that [support] from the Good Party. If a given law serves … the interests of the nation, [the AKP] will not need the MHP, for it could pass that law [in collaboration] with the Good Party as well. … If the AKP defends the right thing, if what it says is beneficial to the nation, the Good Party will give it support.”

Erdogan’s upcoming appointment of vice presidents and Cabinet ministers as well as the election of a parliament speaker will provide the first signs of how harmonious the AKP-MHP partnership will be in the next five years.

Erdogan now has the power to govern the country through presidential decrees, with the prime minister’s post completely abolished. Still, parliament can invalidate those decrees by passing superseding laws on the same subject.

Because the AKP-MHP alliance holds an absolute majority of 344 seats in parliament, the opposition stands little chance of forcing through laws that would thwart Erdogan’s decrees. In theory, however, the possibility of the MHP switching sides and siding with the opposition on critical issues is still there. Also, any eventual collaboration with the Good Party might put strains on the AKP’s alliance with the MHP.

Under the new system, early legislative elections can be called either by the president or by parliament, requiring a three-fifths majority. Yet if the president makes the call, early presidential elections are compulsory along with the parliamentary one.

Meanwhile, Turkey is scheduled to hold local elections in March 2019. There are already reports that the AKP will seek to bring those polls forward to either October or November, before what many see as an inevitable exacerbation of the country’s economic woes. This, in turn, brings to mind the possibility that the ruling party might seek early parliamentary elections simultaneously with the municipal ones in a bid to clinch the majority in the legislature.

Erdogan has already become Turkey’s longest-serving leader as prime minister and president combined, surpassing by several months the 15-year uninterrupted rule of Mustafa Kemal Ataturk, modern Turkey’s founder and first president from Oct. 29, 1923, until his death on Nov. 10, 1938. Erdogan became prime minister in March 2003, a position he held until his election as president in 2014.