The close vote in the April 16 referendum has galvanized Turkey’s opposition, but the prospect of the diverse political spectrum agreeing on a joint candidate to confront President Recep Tayyip Erdogan in the 2019 elections remains daunting. 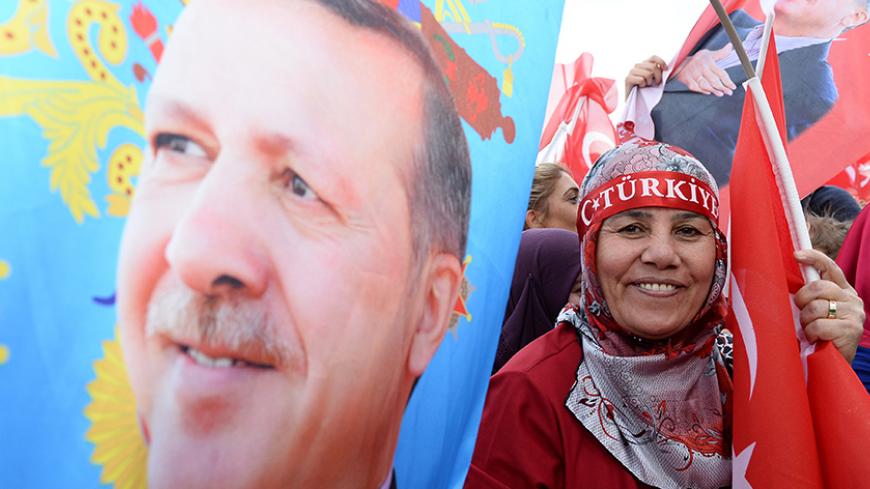 Can Turkey’s fractured opposition unite and produce a leader like French presidential winner Emmanuel Macron, driven by shared apprehension over President Recep Tayyip Erdogan’s rule? Can the critical presidential election in 2019 mobilize the opposition against him?

It's possible on paper, for the constitutional changes narrowly approved in the April 16 referendum have changed the rules of the game. Under the proportional representation system of the outgoing parliamentary regime, removing Erdogan and the Justice and Development Party (AKP) from power was virtually impossible under existing political balances. The new rules, however, allow an abrupt change in the seat of power by offering ground for alliances in the second round of the presidential vote. In other words, the new constitutional order that Erdogan wanted so badly and ultimately obtained risks becoming a political trap for him.

This possibility has stirred heated debate in Turkey since the referendum, with the opposition encouraged by the first serious signs that Erdogan can be defeated. Despite the unfair campaign conditions and allegations of electoral fraud, the “yes” camp came up with only 51% of the vote, about 10 fewer percentage points than the combined vote the AKP and its referendum ally, the Nationalist Movement Party (MHP), got in the general elections in 2015. In addition, the “no” vote prevailed in 17 major urban centers, including the country’s three biggest cities.

The fragility of Erdogan’s victory has given a boost to a gloomy opposition that expected a much worse outcome and animated the political scene. Veteran politician Deniz Baykal, former head of the main opposition Republican People’s Party (CHP) and still an influential parliament member, argued in a May 1 interview that the opposition should unite around a common candidate for the 2019 election, the first under the amended constitution. If CHP chair Kemal Kilicdaroglu does not plan to run for president, he should consider stepping down to allow for a stronger mobilization for the polls, Baykal argued. In another surprise statement, he suggested that former President Abdullah Gul, once Erdogan’s right-hand man, could be considered a joint candidate for the “no” camp.

With his veiled affirmation of Gul — an AKP founder at odds with Erdogan — as a possible candidate to unite the opposition, Baykal put into words something that many have silently thought of as a way to stop Erdogan. The mere utterance of this prospect was enough to rattle AKP ranks.

Baykal’s suggestion for a leadership change in the CHP also rattled the main opposition, sparking an internal power struggle and calls for an extraordinary party convention. The party’s in-house conflicts and the issue of whom it will back in the 2019 polls suddenly became intertwined.

Even more importantly, the hard-pressed CHP leader made it clear that the search for alliances for 2019 had already begun. “It would be wrong to behave as if the entire 49% [of the ‘no’ vote] belongs to us and embark on determining a candidate accordingly,” Kilicdaroglu said in a May 9 address to fellow party members in the parliament, stressing that he had consulted with the heads of more than 50 civil society organizations and was planning to visit fellow party leaders to discuss the process.

Political activity on the opposition’s left will clearly increase in this framework. Yet, it is the conservative camp that will make any alliance against Erdogan relevant and strong. At the referendum, 10% of AKP voters defied Erdogan, voting against the amendments. Will this group expand ahead of 2019? And even more importantly, will it become politicized? Those are vital questions for the coming period that are simmering anew in conservative quarters following Baykal’s mention of Gul as a possible joint candidate.

AKP officials urged Gul to speak out and clarify whether he does intend to confront Erdogan in the presidential race, while Erdogan slammed the idea as an effort to sow discord in the AKP ranks.

True to form, Gul remained cautious, neither opening nor closing the door. Speaking on May 5, he reiterated that he was keeping away from active politics, but at the same time stressed his “responsibility to share his knowledge and experience for the sake of the country.”

The AKP’s first prime minister and president, Gul has remained an important figure for the party and Turkish politics since completing his presidential term in 2014. Having fallen out with Erdogan over his policies after 2013, Gul represents the reformist and liberal leaning of the AKP’s original philosophy. As such, he enjoys a certain sympathy in opposition quarters and stands a chance of luring support from across the political spectrum should he decide to challenge Erdogan in the presidential race. So far, the non-confrontational Gul has held back from speaking out about his differences with Erdogan and creating discord and division in the AKP. The main reason was probably his belief that he had little chance of prevailing over Erdogan.

But given the growing discontent among conservatives and former AKP heavyweights, Erdogan’s continued pursuit of one-man rule could now upset the equilibrium. In his May 5 remarks, Gul seemed to speak on behalf of a certain group and orientation. Referring to vicious attacks from pro-government quarters, he said, “I condemn the unmentionable words and the foul language used against the AKP's real pioneers and founders and the unethical behavior within the party. Everybody now knows how this is being orchestrated.” Alluding to Erdogan, he expressed regret at “the silence in the face of all this.”

If an alliance emerges spontaneously around him, the possibility of Gul making a political move remains on the table in the new environment after the referendum. As Erdogan’s authoritarianism deepens and economic or foreign policy crises erupt, Gul is likely to remain relevant ahead of the critical election in 2019.

The key question, however, is whether the opposition — displeased and worried but still scattered and confused — can organize politically to mount a serious challenge. One must admit that this is no easy prospect. The 49% “no” camp includes antagonistic political movements whose reasons for rejecting the constitutional changes do not necessarily overlap, meaning that their ability to agree on and vote for a joint candidate cannot be assumed.

Moreover, Turkey’s political culture lacks any strong traditions of electoral alliances and compromise. Reconciliation between the MHP’s dissident naysayers and the Kurds, or between the conservatives and the left, seems quite difficult. Finally, the AKP remains the country’s strongest and best-organized political machine, with its popular support still at about 44% despite the recent hemorrhage.

All those developments are putting Turkish politics on a new and uncharted track.