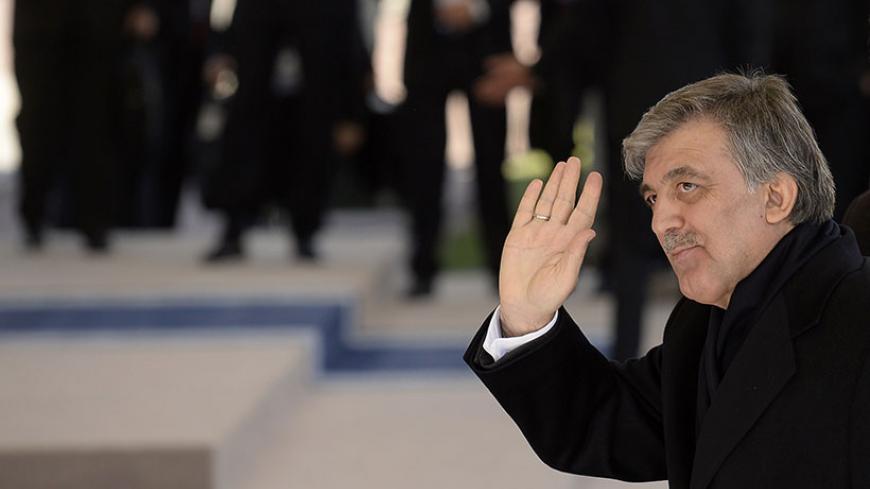 On the night of Aug. 19, President Abdullah Gul was host of a farewell reception at the Cankaya presidential mansion, where his wife, Hayrunisa, made several comments. The Turkish first lady spoke scathingly in front of several Justice and Development Party (AKP) deputy chairmen. In stinging language, she said: “We are passing through a litmus test period. What we have lived through in this process, we didn’t even experience in the Feb. 28 era [the 1997 military coup], when my headscarf was debated. I have never been so sad in my life. We saw what they wrote, heard what they said. My husband was turning off the Internet so I wouldn’t be upset. Now, I am keeping quiet, but not for long. I will launch the real intifada [uprising].”

That wasn’t the full extent of Hayrunisa's fury. She reacted harshly to some journalists at the reception. To Abdulkadir Selvi, the Ankara bureau chief of the daily Yeni Safak, which is close to President-elect Recep Tayyip Erdogan, she said, “I am very angry with you and don’t want to shake your hand.” Selvi’s hand was left hanging in front of all the guests and the media.

She also had some tough words for Mehmet Akarca, Ankara bureau chief of ATV, who was among the journalists in a group photo with her husband.

Murat Yetkin of the daily Radikal reported these scenes in full detail. Yetkin called particular attention to Hayrunisa’s use of the word "intifada," as used in the above quote.

Gul said he was hurt by criticisms from the Islamic wing: “I notice plenty of disrespect from our wing. From now on, I will of course behave as a person who had served as the president. Those who know me will agree. Those who don’t know me — those who have joined our wing recently or who don’t know much about the past — simply chat about these issues as daily events. I will not say anything more than I already did, but just wanted to remind of their impertinence.”

So, what now? Is the Aug. 19 incident a harbinger of a Gul vs. Erdogan clash? Gul praised Davutoglu, but is he thinking of toppling Davutoglu and replacing him as the AKP chairman and prime minister?

According to Erdogan’s plan, Davutoglu will lead the AKP to the June 2015 general elections. If the AKP again becomes a single-party winner, with about 45% of the vote, Davutoglu will be the prime minister for the 2015-2019 term. I know from inside sources that both Erdogan and Davutoglu would like to see Gul as the foreign minister in the new Davutoglu government.

But Gul is not keen on this idea. He wants to be the chairman of the AKP and the prime minister, while Erdogan wants Davutoglu to be the chairman. Circles close to Gul are split. Some want Gul to take a firm position against Erdogan, while others think a clash with Erdogan would be suicidal.

At the moment, the empires owned by billionaire media bosses Aydin Dogan and Turgat Ciner support Gul against Erdogan. Preacher Fethullah Gulen also supports Gul. People close to Gul told me that Gul is not happy with Gulen’s support. It was well known that from his youth, Gul has not liked Gulen.

One must divide Gul’s close circles to two. First are the advisers of liberal Islamic ideology who want Gul to take a very clear position against the Gulen movement. They also don’t find Dogan and Ciner's support for Gul sincere, and they recommend avoiding a Gul-Erdogan clash.

But, in case of a confrontation, secular leftists around Gul think Gul will topple Erdogan. They want to bring together all segments disliking Erdogan under Gul.

According to a liberal Muslim who is very close to Gul, Gul has always, until today, reached positions with the support of a religious base. He says that Gul turning his back on this base, which today supports Erdogan, will be the end of the outgoing president. I fully agree with his analysis. I believe that if Gul clashes with Erdogan, he will put himself in Gulen’s position. Gul has no chance at winning a clash with Erdogan.

Gul is an intelligent politician with an analytical brain. He would not think of clashing with Erdogan. But surrounding Erdogan is a clique that wants to totally eliminate Gul from politics. And there is the group that wants Erdogan to work in harmony with Gul.

So, what will happen in Turkish politics in the short term? Erdogan wants Gul to take over the Foreign Ministry and Davutoglu to be the party chairman and prime minister. Erdogan’s associates say Gul is not a member of the parliament, therefore it is impossible for him to be prime minister according to current legislation.

I say, Gul will not accept the position of foreign minister. I think Gul will wait until the next elections. Should the new AKP leader Davutoglu be unsuccessful in the June 2015 elections, with votes dipping below 40%, Davutoglu would retain that post. The AKP will then call for an extraordinary congress and elect Gul as the party chairman. Of course, an AKP below 40% means the AKP cannot be the single ruling party. Pandemonium will break out in Turkish politics, and Turkey will revert to another era of coalitions.

But what will happen if Davutolgu, with the support of Erdogan, succeeds in keeping the AKP as the single ruling party? Then Gul will have to wait for 2019. It is very likely Gul will then wither away from Turkish political life.

I think the AKP under Davutoglu, supported by Erdogan, will retain the government in June 2015. In 2014-2019, Erdogan will be the president and Davutoglu the prime minister. If Gul doesn’t accept the position of foreign minister, he will be outside this equation. Washington and Brussels should keep this in mind when making their plans about Turkey.