'Justice for all' in Turkey must include Kurds

The Turkish opposition's Justice March reveals that the president's exhausting hate rhetoric is wearing thin in Turkey and for much of the world. 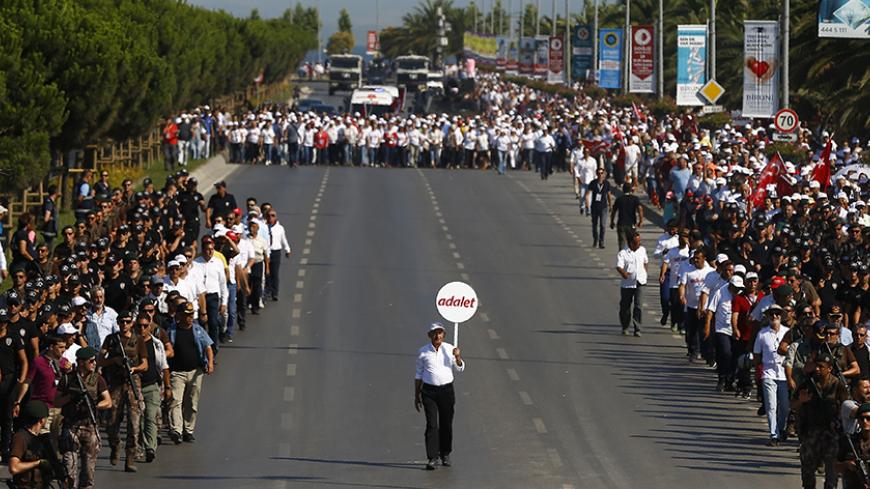 Kemal Kilicdaroglu, the leader of Turkey's main opposition party, wrapped up his 25-day, 270-mile Justice March from Ankara to Istanbul last week and was greeted at a rally attended by more than a million people. Does the enormous support for the anti-authoritarian campaign indicate a turning tide in Turkish politics?

The 25-day period was chosen deliberately to symbolize the prosecutors’ demand for a 25-year prison term for Enis Berberoglu, one of Kilicdaroglu's fellow members of the Republican People’s Party (CHP).

Throughout the march, the most controversial issue was the reaction of members of two other opposition parties. One is the Nationalist Movement Party (MHP), ultranationalists who have long operated in unison with Turkish President Recep Tayyip Erdogan. Several prominent Gray Wolves — as party members are known by the public — have distanced themselves from the MHP and have been operating as part of the opposition.

The other opposition group is the pro-Kurdish Peoples’ Democratic Party (HDP), whose co-chairs and several members are currently in jail.

Ironically, what led to the arrest of CHP lawmaker Berberoglu was the vote his own party approved in May 2016 allowing parliamentarians to be stripped of their legal immunity. At the time, Kilicdaroglu and other CHP members explained that they had to vote "yes" to keep from being labeled terrorists alongside the HDP. However, last month several CHP lawmakers publicly acknowledged their mistake. On July 9 at the Justice Rally, without making references to Kurds, Kilicdaroglu said the march helped opposition members cast aside their fears. Is that really the case?

It is crucial to see the complicated interaction of the CHP with Kurdish and ultranationalist factions of the political opposition. The HDP announced its support for the march. On the 19th day of the march, HDP leadership briefly joined the walk and was photographed with Kilicdaroglu under the banner “Justice for all.”

Reactions to this brief photo op were immense, reflecting the opposition's complex divisions. For example, Sinan Ogan, a former member of the ultranationalist MHP and now an independent member of the opposition, posted a much-debated tweet. Ogan said, “Was not Ahmet Turk [an elder HDP member who was let out of prison at the request of MHP leader Devlet Bahceli] released from prison due to his [deteriorating] 'health?' If he is well enough to march, why [did Bahceli] act as a liaison for his release?”

Thousands commented. Most were critical of Ogan’s words and labeled his rhetoric as anti-Kurdish, even racist. Yet, Ogan’s real jab was at Bahceli, who had asked for Turk to be released. Ogan had criticized Bahceli for encouraging Gray Wolves to attack him and others who were campaigning against the constitutional reforms. In addition, he was perplexed to see Bahceli extending his get-well wishes to Turk but not the Gray Wolves. This tweet should also be seen as a continuation of the internal battle of the ultranationalist movement in Turkey, which is gradually being absorbed into the ranks of Erdogan's Justice and Development Party (AKP).

Still, it is also crucial to see that Ogan’s tweet encouraged pro-government voices against the march. The hashtag #AdaletDedilerPKKCikti means, “They said justice, but it turned out to be the PKK [Kurdistan Workers Party].” The AKP’s virtual troll army used this comment and the photo of Kilicdaroglu with Kurdish leaders to brand the march as corrupted by terrorists. Since the 2013 Gezi Park protests, Erdogan has successfully and meticulously branded all opposing figures as traitors, spies and terrorists.

Dogu Perincek, chairman of the marginal but ultranationalist Patriotic Party, who is known for his denial of the Armenian genocide, harshly criticized Kilicdaroglu for accepting HDP members to the march. Perincek said this alliance is a US scheme and likened it to the addictive and deadly bonzai drug. Alp Altinors, an HDP council member, did not mince words regarding Ogan or Perincek. He told Al-Monitor, “For them, the best Kurd is either a dead or enslaved one. But we focus on the march. The quest for justice is a public demand. It cannot be limited to any political party. That is how we approach the matter. We do not dwell on the CHP’s past mistakes, and [we] seek justice for all.” Altinors added that those who oppose the justice march are aiding Erdogan’s regime and emphasized that without Kurds, the opposition cannot succeed anytime soon.

Yet this effort to discredit the opposition — an effort that has grown in frequency and ferocity during the past five years — has almost run its course. The march only got stronger after the participation of HDP members. There were parents of military cadets who are still in jail a year after the July 15 coup attempt and family members of those who died. In addition to Islamist groups such as Anti-Capitalist Muslims, even AKP founding members such as Fatma Bostan Unsal participated in the march and supported Kilicdaroglu’s quest for justice. Families of Gezi protest victims and the 2011 Roboski massacre were also present.

Though Ogan was critical of HDP's Turk marching along with Kilicdaroglu, another former key MHP member, Meral Aksener, publicly announced her support for the Justice March early on. She explained to her followers on Twitter that if the leader of the main opposition party is obliged to march with a sign that reads “justice,” then everyone needs to pause and think. At the end of the march, Aksener congratulated Kilicdaroglu and reminded the public that Mahatma Gandhi’s Salt March led to Indian independence.

Yet some senior AKP members crudely ridiculed Aksener’s support for the march. Parliamentary Speaker Ismail Kahraman, who is known for his Islamist stance, referred to Aksener as “Meral Kilicdaroglu” at a Ramadan dinner, implying she has become a Kilicdaroglu concubine. (Kahraman’s words once again remind us that independent-minded women in Turkish politics are no longer acceptable.) Aksener was furious and posted a searing open letter on her Twitter account. Aksener expressed disappointment in her colleague with strong words, saying Kahraman has learned little of Islamic education and values in his 77 years.

The Justice March has made clearer a few observations about Turkish politics.

First, Kurdish support is essential for the opposition to have any realistic chance of standing up against Erdogan and continuing within the legitimate political domain.

Second, younger generations of Kurds and Turks, along with members of various political parties, are becoming disillusioned with the stalled peaceful political process. But the AKP’s obsessive political control only allows their voices to be heard when they are fighting against each other.

Third, Kurds, women and other political minorities are viewed as passive, disposable figures whose opposition cannot be tolerated in politics. All of these are worrisome indications of Turkey’s potential slide into total dictatorship.

AKP-controlled media outlets ignored the march for as long as they could, then mentioned it only in passing as the “so-called justice march.” Erdogan, during the recent G-20 meetings in Germany, called HDP Chairman Selahattin Demirtas — sometimes fondly referred to as the "Kurdish Obama" — a “terrorist.” Erdogan’s words received little to no attention in respected international media outlets, unlike the imprisoned Demirtas’ response. It seems the majority of Turks and much of the world are disillusioned by Erdogan’s gimmick of branding everyone who opposes him terrorists, spies and traitors.