In response to the arrest of one of its deputies, leader of Turkey’s secular opposition party Kemal Kilicdaroglu called for a popular march, but the protest move isn't distracting critics from his timid response to the president's increasing authoritarianism and fraud allegations. 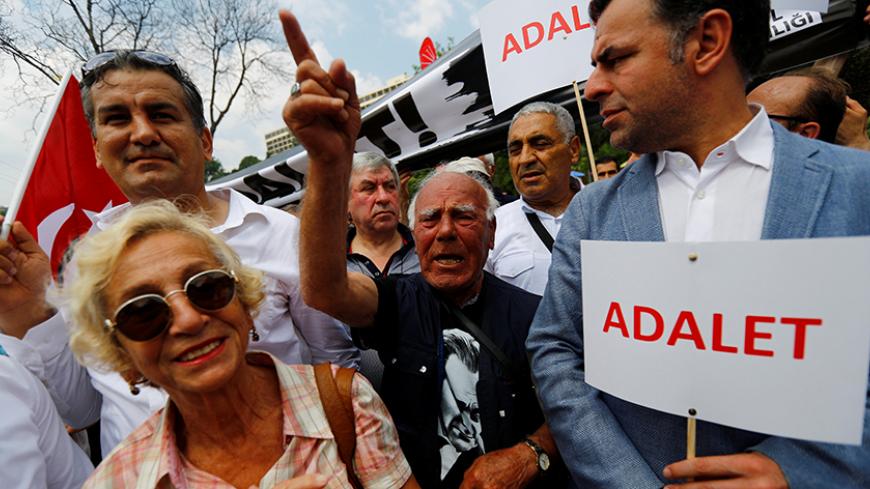 A demonstrator chants during a protest against the detention of Republican People's Party lawmaker Enis Berberoglu in Istanbul, Turkey, June 15, 2017. The placard reads "Justice." - REUTERS/Murad Sezer

Turkey’s main opposition Republican People’s Party (CHP) staged mass rallies on June 15, the day after one of its deputies, Enis Berberoglu, received a 25-year prison sentence for revealing state secrets. Berberoglu, a journalist by profession and former editor-in-chief of Hurriyet, the country’s largest newspaper, was immediately placed in custody and taken to Maltepe Prison in Istanbul.

Although he is the first CHP deputy to be imprisoned in 15 years of Justice and Development Party (AKP) rule, Berberoglu joins about a dozen other primarily Kurdish Peoples’ Democratic Party (HDP) deputies who are serving prison terms, including co-chairman Selahattin Demirtas.

In response, CHP chairman Kemal Kilicdaroglu called for a “Justice March” that drew thousands of people. The leader of Turkey’s secular opposition party aims to walk from the capital, Ankara, to Istanbul’s Maltepe district, where Berberoglu is held, a distance of some 430 kilometers (about 267 miles) that Kilicdaroglu plans to walk in 20 days.

After the criticism for his timid response to Turkish President Recep Tayyip Erdogan’s increasing authoritarianism and fraud allegations in the April 16 referendum, Kilicdaroglu’s recent move has received positive coverage in the domestic and international media.

Yet, several factors work against the CHP and its embattled leader. For one, Devlet Bahceli, chairman of the second largest opposition group the Nationalist Movement Party (MHP), took to Twitter to criticize Kilicdaroglu’s protest march. Bahceli accused the CHP leader of “telling on [Turkey] to the West” and “either being an accessory or an active participant in the trap set for our country.” Since the coup attempt in July, Bahceli has struck up an uneasy partnership with the AKP and Erdogan.

Thus, without the MHP, the CHP has little chance to confront Erdogan’s AKP.

In addition, some analysts such as Burak Kadercan, an assistant professor of strategy and policy at the US Naval War College, think Kilicdaroglu’s action is too little, too late. Kadercan pointed out that the “state secrets” that Berberoglu had passed on to Cumhuriyet's editor-in-chief, Can Dundar, had likely come from the supporters of Fethullah Gulen (to whom many Turks derogatively refer as “FETO” for "Fethullah Terror Organization") in the opening rounds of Gulen’s fight with Erdogan in early 2014. Kadercan tweeted, “To pursue a case that was serviced by FETO and pushed by Can Dundar would close AKP ranks, and it would not motivate the opposition.”

At any rate, Kilicdaroglu is facing growing opposition within his own party. Many CHP members including former deputy chairwoman Selin Sayek Boke, who resigned from her post May 6, blamed the CHP leader for his inadequate reaction to Erdogan’s marred referendum victory. It is not hard to see Kilicdaroglu’s long march from Ankara to Istanbul as an attempt to re-establish his authority in the party and generate popular support for the CHP. While Kilicdaroglu has earned the nickname “Gandhi” for his physical resemblance to the father of modern India, he has yet to replicate the charismatic Indian leader’s political successes. Should Kilicdaroglu fail to generate support for himself within the party and for the party within the country, his days as CHP chairman will likely to be limited.

In other news, two people have been arrested in the United States in connection with the violent attack on protesters chanting slogans against Erdogan during the Turkish president’s visit to Washington May 16. During the scuffle, Erdogan’s bodyguards and Turkish-American supporters attacked some dozen protesters outside the Turkish ambassador’s residence on Sheridan Circle. In the aftermath of the episode, both Democratic and Republican politicians condemned the Turkish side’s actions. Whether the event will worsen US-Turkish relations any further remains to be seen.