Turkey’s political parties hit each other with coup allegations

The Justice and Development Party government and its supporters are using a Republican People’s Party lawmaker's comments to steal the main opposition party’s thunder. 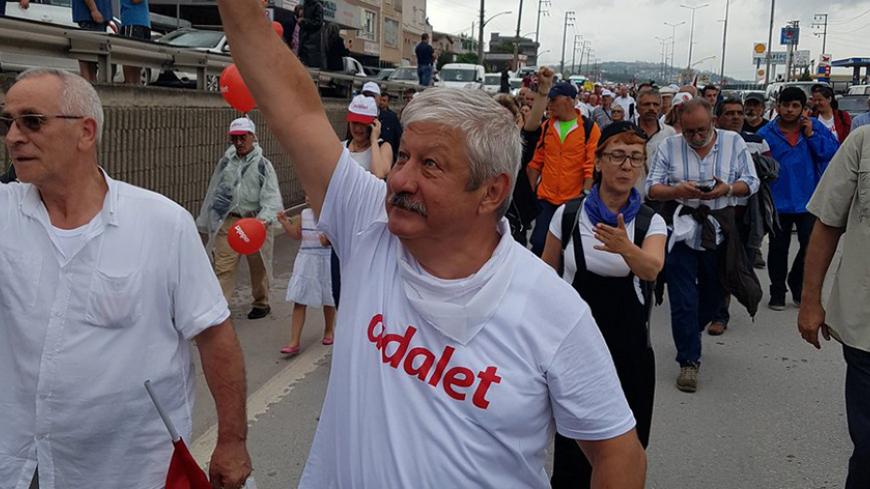 Member of parliament with Turkey's main opposition Republican People’s Party Mustafa Akaydin takes part in the Justice March from Ankara to Istanbul in this image posted on July 6, 2017. - Twitter/@m_akaydin

Mustafa Akaydin, a member of parliament with the main opposition Republican People’s Party (CHP), allegedly said Aug. 7 that the failed putsch of July 2016 was “theatrics” and that “the state [actually] killed the 250 martyrs” who were resisting the takeover. Akaydin reportedly questioned how the Turkish air force’s highly trained F-16 pilots, who played a prominent role in the plot, could bomb the parliament building but not cause significant damage. He repeated CHP chairman Kemal Kilicdaroglu’s claim from earlier this year that the coup was “controlled” — meaning the Justice and Development Party (AKP) government knew about the plan in advance and allowed it to take place for political gain.

Per news reports, Akaydin also added that the commemoration ceremonies for those who died fighting the coup are meant to replace the memory of Mustafa Kemal Ataturk and the national struggle he led from 1919 to 1922 that culminated in the founding of Turkey as a republic in 1923. Through these public displays of patriotism, Turkish President Recep Tayyip Erdogan is trying to replace Ataturk as the pre-eminent leader of modern Turkey.

Although the pro-government daily newspaper Sabah released a video in which Akaydin says he stands “behind every word [he] said,” the footage is clearly edited and it is not clear exactly what he said in his original statement or subsequent clarification.

As can be expected, high-ranking officials of the ruling AKP and their supporters in the media had a field day with Akaydin’s words. Prime Minister Binali Yildirim condemned the remarks and exclaimed, “What sort of person are you? How dare you utter words that hurt the souls of our martyrs?” Yildirim proceeded to attack Kilicdaroglu for calling upon German tourists not to visit Turkey because it was “unsafe.” The CHP leader denied he said anything to that effect in a recent interview with the German magazine Focus.

On the surface, it is mind-boggling to see the AKP and the CHP fight over the coup when they largely agree that the Pennsylvania-based preacher Fethullah Gulen and his followers (which most Turks derogatively refer to as the “Fethullah Gulen Terrorist Organization” or FETO) organized the putsch.

The AKP and the CHP are attacking each other over the coup for several reasons.

For the ruling party, Akaydin is a great target. An academic and medical doctor by training and former mayor of the city of Antalya, he threatens the AKP’s hold on the popular city. The Turkish Court of Accounts recently fined Akaydin 10 million liras ($2.83 million) for causing a budget shortfall during his tenure as mayor (2009-2014). Antalya is Turkey’s leading tourist metropole and has been heavily contested between the AKP and the CHP in the local elections.

Should he run against the incumbent, who is an AKP member, Akaydin could win back the coveted mayorship of one of Turkey’s most important cities. Not surprisingly, he refuted the accusations regarding the budget shortfall and argued that the court “has become a political institution.”

As for Kilicdaroglu, he has unnerved the AKP with his 25-day “Justice March” in which the 69-year-old CHP leader walked from Ankara to Istanbul. Carrying only a placard that read “justice,” Kilicdaroglu’s protest procession brought together hundreds of thousands of Turkish citizens from diverse political backgrounds. Should Kilicdaroglu’s appeal widen, it could threaten Erdogan and the AKP in the 2019 elections.

The allegations over the coup plot and the FETO connection play a key role here. For the AKP, painting the CHP as a surrogate of FETO allows the ruling party to marginalize its detractors. One who opposes the AKP must be a FETO stooge.

For the CHP, insisting that the AKP knew of the plot in advance would bolster the main opposition party’s stance that after being manipulated by Gulen for years to increase his hold on the state and society in Turkey, now Erdogan’s party is using FETO to control Turkey and turn it into a dictatorship. One who supports the AKP must be the unwitting partner of FETO.

Until and unless both sides stop using the coup attempt and its tragic memory for their own gains, polarization and disunity will remain part and parcel of Turkish politics for the foreseeable future.