Turkey's ruling party and opposition leadership are trading accusations of complicity and cowardice in the July coup in a race to discredit each other as the constitutional referendum nears. 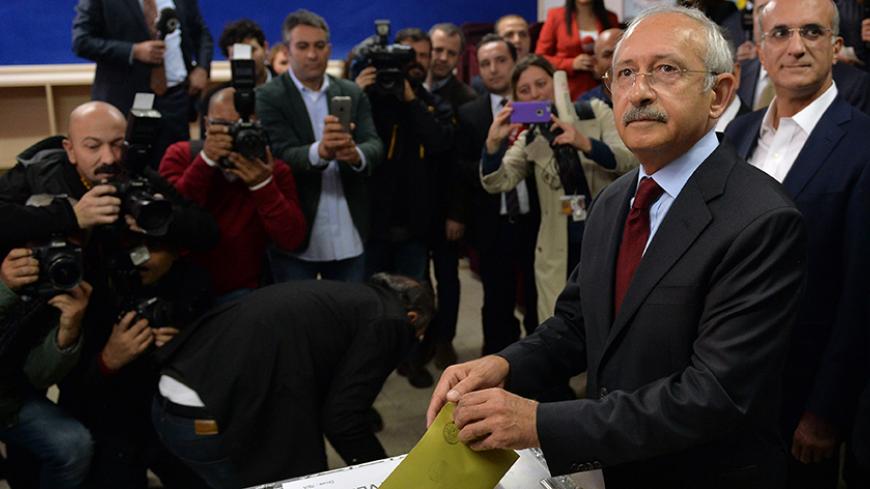 Mirror, mirror on the wall, who's the bravest Turk of all?

Turkey’s President Recep Tayyip Erdogan and members of his ruling Justice and Development Party (AKP), along with their supporters in the media, are accusing and mocking Kemal Kilicdaroglu, the chairman of the main opposition Republican People’s Party (CHP), for allegedly fleeing the putschists during the failed coup attempt in July.

Pro-Erdogan outlets have been splattering videos and images allegedly showing Kilicdaroglu at Ataturk International Airport in Istanbul first being informed of the coup attempt and then returning to the terminal and waiting for the putschists’ armored vehicles to retreat. Once they withdrew, Kilicdaroglu supposedly left the airport. Although some videos of Kilicdaroglu have appeared on YouTube, they fail to corroborate the AKP's version.

The row started April 3, when Kilicdaroglu repeated his January allegation that the coup attempt was “controlled” and that Erdogan and the AKP “knew about the coup in advance.” The CHP chairman also said that 120 to 180 out of the AKP's total 317 parliamentarians use the messaging app ByLock, which the Turkish government believes was one of the main means of encrypted communication between followers of the Pennsylvania-based preacher Fethullah Gulen, whom they accuse of masterminding the coup.

What the Turkish president knew before the coup attempt and exactly when he learned them remains unclear. Many observers, such as Al-Monitor’s Sibel Hurtas, suspect that the Turkish president closed down the parliamentary commission investigating the coup attempt in December 2016 because he did not want senior bureaucrats — especially the country’s spy chief Hakan Fidan and Chief of General Staff Hulusi Akar — to be cross-examined and possibly undermine his version of events. For one thing, it would make Erdogan look duplicitous if he knew of the coup in advance and instead of pre-emptively stopping it, used it for political gain.

The AKP camp responded to Kilicdaroglu’s explosive accusations with great fervor. While Erdogan said Kilicdaroglu had established contact with plotters on the night of the coup, Prime Minister Binali Yildirim said the CHP leader’s comments were an affront to the 249 policemen, soldiers and civilians who died resisting it. Pro-Erdogan daily Sabah labeled the opposition leader’s actions that night “controlled escape,” though its April 11 front page ran the catchiest headline of them all: “Tanks got out of the way, Kilicdaroglu ran away.”

At one level, the incident is the proverbial tempest in a teapot. On the night of the coup and a few days after, several news outlets claimed that Erdogan had escaped to Greece, Iran or even Germany. While Erdogan spent much of the night of July 15 moving from his vacation spot in the Aegean town of Marmaris to the nearby Dalaman airport and from there to Ataturk International Airport, he called upon Turkish citizens to storm the streets and resist the coup plotters. By the time Erdogan had landed in Istanbul in the wee hours of July 16, the airport was cleared. It would have been dangerous and irresponsible for Erdogan or Kilicdaroglu to behave in any other way. Their “pulling a Yeltsin” and mounting a tank and possibly getting killed in the process would have brought no benefits to Turkey.

So why this competition for bravest politician during the coup plot? The row is actually a strategic showdown over Turkey’s upcoming presidential referendum. Public opinion polls show that the April 16 vote is likely to be close, so both the Erdogan-led “yes” camp and Kilicdaroglu-led “no” party are hoping to undermine the other side by questioning their sincerity.

If the proposed constitutional amendments pass, Erdogan will enjoy immense power in Turkish politics — possibly all the way to 2029. However, if the amendments do not pass, it would be the Turkish president's most embarrassing defeat.

It remains to be seen whether such dangerous accusations will bring Erdogan or Kilicdaroglu victory. They certainly will not bring peace and stability to Turkey after April 16.