How conflict with the West empowers Erdogan

How did the West so firmly become the main enemy for Turkish President Recep Tayyip Erdogan and his supporters? 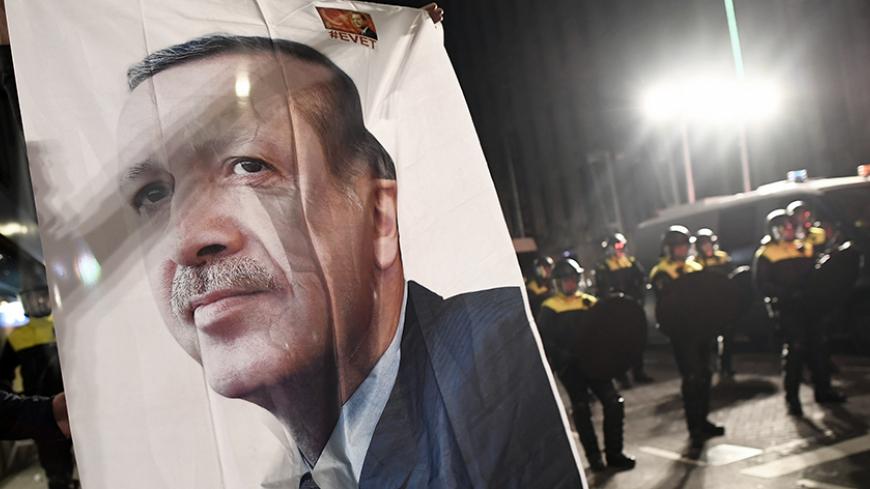 A large image of Turkish President Recep Tayyip Erdogan is held up outside the Turkish Consulate during protests in Rotterdam, Netherlands, March 11, 2017. -

On March 13, Blick, the third top-selling newspaper in Switzerland, came out with a giant headline in an unusual language: Turkish. “Vote ‘no’ to Erdogan’s dictatorship,” the title read, appealing to the Turks living in this small country. President Recep Tayyip Erdogan, the paper argued, was seeking to establish dictatorship with the upcoming referendum on April 16. And Turks living in Switzerland, who enjoy the freedoms of this liberal nation, should say “no” to this menace.

Back in Turkey, however, this headline quickly turned into yet another reason to vote “yes” for Erdogan. Pro-government media ran immediate stories condemning the Swiss paper — in fact, Switzerland and all of Europe — for imperialist hubris. They also called on all Turks to give their patriotic response by rallying behind the great leader. On social media, pro-Erdogan users reiterated their standard line: Europe’s enmity was not just against Erdogan, but in fact against Turks and Islam. “This,” a pro-Erdogan journalist even declared, “is the war of the Cross against the Crescent.”

This is the narrative one can read and hear every single day in Turkey’s pro-government media. It is a narrative that explains every single tension with Western nations — including the recent “Tulip Crisis” between Turkey and Holland, which could have been avoided if both sides acted more reasonably. It tells Turks the West is not really worried about Erdogan’s authoritarianism, which is only necessary for a nation under major threats. The West is rather worried that Turkey is becoming a powerful, independent, virtuous nation. Erdogan is just making Turkey great again, in other words, and that is why Turkey’s quintessential enemy — the West — is all up in arms.

This very narrative itself is actually proof that Erdogan indeed is authoritarian, because it equates patriotism and Erdoganism and considers all Erdogan critics as enemies of the nation. The enmity against the West, in other words, helps intimidate all “Western puppets” within Turkey, which are basically all opposition circles.

One may wonder, however, why the West has so categorically become the main enemy for Erdogan and his supporters. Because when Erdogan first came to power in 2002, this was not the case at all. His Justice and Development Party (AKP), despite its Islamist roots, rather embarked on a mission to make Turkey a full member of the European Union. Erdogan was a frequent visitor to Western capitals at the time, and a sponsor of love fests between the East and West such as the Alliance of Civilizations.

This Western-friendly AKP was a product of two things. The first was soul-searching and self-reform among Turkey’s Islamists. In a plenitude of meetings, panels, media forums and informal chats, Western concepts such as liberal democracy were discussed and accepted, whereas the anti-Westernism of the past — called the “National View” ideology — was abandoned.

But there was also a second and more burning reason for abandoning anti-Westernism: It was the only way to survive the wrath of Turkey’s secular establishment. This establishment, upheld by a draconian military and judiciary, had overthrown the AKP’s predecessors for trying to take Turkey away from Ataturk’s Westernized vision. It could do the same thing again. The safest way to overcome this threat was to outdo the secular establishment in Westernization. That is why the AKP hung on tightly to the European Union rope, which really saved itself from any possible “coup attempt” in the first decade of the 2000s.

However, this pragmatic reason to cozy up with the West ended in the early 2010s when Erdogan subdued the secular establishment and seized the state for himself. The EU soon even began to look like a drag on his feet. His notion of “democracy” was limited to the ballots, and as he began to crack down on free speech, the gap with Europe widened. From 2013 onward, Erdogan even began to believe in a giant Western conspiracy to topple him, to which he responded with furious anti-Westernism.

That is why today’s AKP is a far cry from the AKP of the early 2000s. Those who have stayed loyal to the party’s intellectual founding — including its grand names such as former President Abdullah Gul or longtime czar of the economy Ali Babacan — have all been sidelined. Erdogan rather created a new coalition of militant nationalists whose common call is to build a “fully independent” Turkey.

Islam — or, more precisely, a kind of Islamic nationalism — plays a great role in this latter-day AKP ideology. The West is depicted as not just the enemy of Muslims but also their very antithesis. Muslims are moral, honest, decent people, whereas the West is corrupt, degenerate and hypocritical. It is a typical case of Occidentalism, which — just like its mirror image, Orientalism — demonizes a whole civilization for the sake of its own biases and ambitions.

Notably, in this major anti-Western drive, which is likely to make Turkey a Muslim version of Vladimir Putin’s Russia, Erdogan has a major ally within the West itself: the Orientalists, especially Islamophobes. These are the people who, with their enmity against Muslims and their double standards over them, prove the Erdoganists right. One shining example is the far-right Dutch politician Geert Wilders, who led the Tulip Crisis on the Dutch side. Erdoganists are now busy sharing his anti-Islam remarks online, only to add: “This is the real face of Europe.”

If Europeans want to break this vicious cycle and the “clash of civilizations” it heralds, what they need to do is simple: Show that Wilders and his ilk, and the anti-Islamic ideology they represent, is not “the real face of Europe.” Show that liberal values are not lies and double standards, but true norms valid for everyone. Uphold freedom of speech and the right to peaceful assembly for all — including the defenders of Erdogan. Be principled, in short, about Europe’s own principles.