What turned Erdogan against the West?

The Turkish ruling party’s fast-rising anti-Western rhetoric may be a reaction to Western “meddling in our domestic affairs” rather than opposition to the West’s “imperialist” foreign policy. 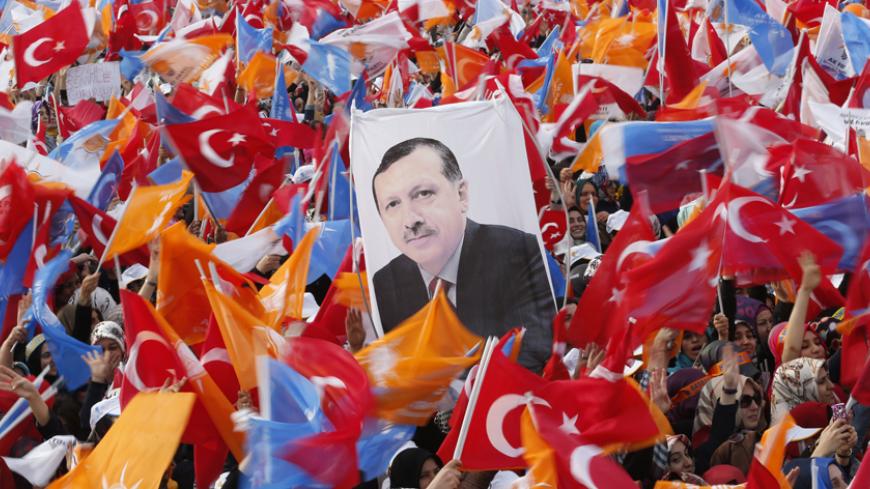 As any Turkey watcher would easily confirm, hostility to the West has increasingly marked the rhetoric of President Recep Tayyip Erdogan, his ruling Justice and Development (AKP) and pro-government media in the past two years. Especially since the Gezi Park protests in June 2013, the narrative of Erdogan and his entourage has revolved around Western “conspiracies” and a “national will” that is bravely fighting them.

Yet for those familiar with the AKP’s 14-year history, this may have come as a surprising turn. When the AKP was created in 2001, hostility to the West was not something with which it identified itself. On the contrary, party founders claimed to have disowned the Islamist, anti-Western “National View” tradition from which they came. Likewise, in the first years after the AKP came to power in 2002, Westernization (i.e., integration with the European Union) was the party’s prime objective. Back then, Europe was the source not of treacherous conspiracies that had to be thwarted, but of democratic criteria that had to be embraced.

Not surprisingly, the fiercest opposition to the AKP during that period from 2002 to 2010 was mounted by the anti-Western breed of Turkish secularists, known as neonationalists. This quarter — whose slogan is “Neither the US nor the EU, but a fully independent Turkey” — accused Erdogan’s government of “selling Turkey out to imperialism.” In 2007, one of Turkey’s best-selling books was nonsense titled “Moses’ Children,” which declared Erdogan to be a “crypto-Jew” colluding with the Elders of Zion. In the same era, the argument that Turkey should move closer to Russia instead of the EU was promoted by neonationalist generals, who would be implicated in the alleged Ergenekon coup plot to overthrow the AKP.

So, what happened that things turned upside down in the past two years? Why is the cry for a “fully independent Turkey” coming from AKP quarters now? Why is a paranoia of “Jewish agents” seeking to undermine Turkey being fueled by the pro-government press and social media?

Government quarters will likely answer these questions along those lines: “The West is aggressive against Muslims. Palestine is bleeding. Muslim blood is flowing in Syria. Egypt’s legitimate Islamist government was overthrown in a bloody coup. The West is responsible for all these and standing up against Western imperialism is our justified reaction.”

This answer, however, is unconvincing for a plenty of reasons. Here are some of them:

In short, the strong anti-Western sentiment in the AKP world is hard to explain with — or at least only with — the West’s “imperialist” foreign policy. What could be the actual reason, then?

In my view, it’s the West’s continuous meddling in “our domestic affairs.” In the past several years, not a month has passed without a Western think tank issuing a report criticizing the state of press freedom or judicial independence in Turkey. Western media are awash with commentaries of a Turkey “moving toward authoritarianism.” The EU’s progress reports warn of “regression” on democratic norms. Washington often voices “concern” over the state of freedoms in Turkey.

Russia, on the other hand, never meddles in “our domestic affairs.” Moreover, Putin — himself under Western fire over Russia’s grave record on freedoms — praises Erdogan as a “tough man.” Erdogan’s chief adviser, Yigit Bulut, in return, describes Putin and Erdogan as the world’s “two greatest leaders” today.

But then here is another question: The West was similarly meddling in “our domestic affairs” a decade ago as well. Why was Erdogan not angry at the West at the time?

The answer is not that hard to find. A decade ago, the real power in Turkey did not rest with Erdogan, but with the Kemalist establishment, represented by the military and the judiciary. Erdogan was in fact under the threat of their iron fist. Hence, the West’s meddling in “our domestic affairs” and its pressure on Turkey to abide by European norms was playing into Erdogan’s hands.

In 2008, for instance, the European Commission’s then-president Manuel Barroso visited Turkey after a court case was opened to outlaw the AKP. He urged the Turkish judiciary to respect the “Venice Criteria,” which would rule out party closures merely based on ideology. It was hard-core secularists keen to see the AKP banned who denounced this “imperialist” meddling, while AKP members seemed quite happy with it.

Starting from 2010, the AKP subdued the old Kemalist establishment and laid hands on “full power.” With its newly found self-confidence, the party went back to its own ideological agenda. Its intimidating response to reactions from Turkish society served only to intensify those reactions. Growing political tensions dragged the AKP into a sharp us-versus-them rhetoric, in which the West morphed into a diabolical force behind “the enemies within” — such as secularists, liberals and, especially, the Gulenists.

In sum, it’s not the West, but rather the AKP that has dramatically changed since 2002. (If any key change took place in the West, the United States has shifted in a positive sense, moving from Bush’s aggressiveness to Obama’s moderation). The fundamental change was Erdogan attaining “absolute power.” He refuses to tolerate any limits imposed on his power by the international community and the liberal values it promotes, hence he yearns for a “fully independent” Turkey. In response to criticisms over press freedoms, for example, Erdogan today tells the EU “to mind its own business.”

None of these mean that all Western criticism toward Erdogan and his government is justified. Some in the Western media have used a prejudiced tone against Ankara, driven by ideological bias against “Islamists,” or as a reaction to Erdogan’s conspiratorial narrative. There is also no doubt that the Western foreign policy has no shortage of hypocrisy. Washington’s unconditional defense of Israel or leniency for the coup in Egypt, for instance, deserve lots of criticism. Moreover, some Western fiats on Turkey could be really driven by mere interests, and resisting those fiats is certainly a rightful stance.

Yet still, none of these reasons fully explains, let alone justifies, the categorical anti-Western rhetoric we hear from Turkey’s ruling elite today. The real explanation, I think, is their rejection of Western-style liberal democracy in favor of a self-styled authoritarian democracy. It is no coincidence that Hungary’s anti-EU leader Victor Orban agrees, for now he applauds Turkey, along with Putin’s Russia, as a good model for “illiberal democracy.”