The one-year anniversary of the Gezi Park protests is another reminder of Prime Minister Recep Tayyip Erdogan's durability despite a series of crises. 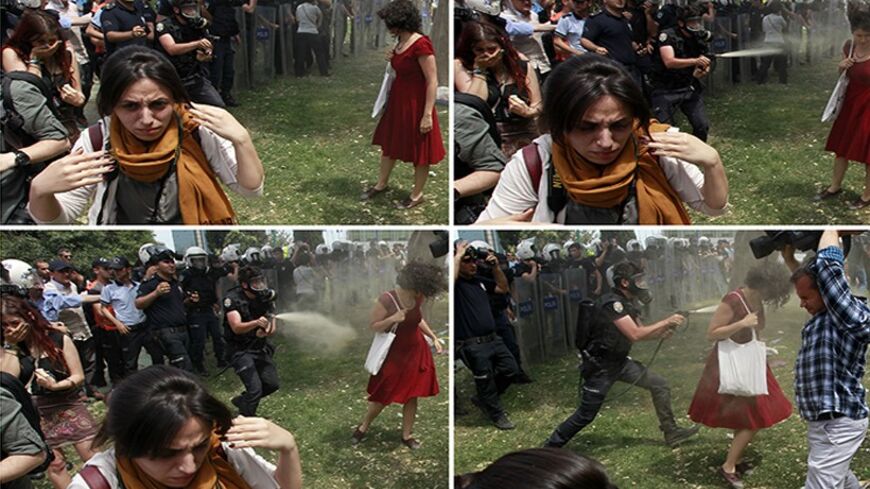 These images of a Turkish riot policeman using tear gas against a woman in Taksim Square, as people demonstrate against the destruction of trees in Gezi Park, became an iconic photograph for the protests in Istanbul, May 28, 2013. - REUTERS/Osman Orsal

Turkey is bracing for the first anniversary of the demonstrations that started as a simple protest to save trees in Gezi Park, near Istanbul’s Taksim Square, and ended up convulsing the country after the government’s heavy-handedness toward the protesters.

Many in and outside of Turkey saw the demonstrations as Turkey’s version of the Arab Spring, hoping it would bring down the country’s increasingly authoritarian and bellicose Prime Minister Recep Tayyip Erdogan.

The international media trained its live cameras on Istanbul for days — much to the annoyance of the ruling Justice and Development Party (AKP) — while many Western commentators barely concealed their hope that this was the beginning of the end for the overtly anti-Western Erdogan.

Also attracting attention in the West was the middle-class nature of the “uprising,” which was driven by educated youth from the secular urban elite and supported by an older generation coming out nightly to clang pots and pans to protest Erdogan and the AKP. A year later, one has to ask what all this led to.

“Not much” appears to be the honest answer, if the intention was to bring down Erdogan, who presented the demonstrations as a conspiracy by a Western-led “international interest-rate lobby” that aimed to topple him. He managed to convince his base of this idea with the aid of the pro-government media.

But Erdogan’s battles were not over. He faced another major crisis in December after prosecutors launched a corruption investigation involving his government and including him through his son Bilal. Erdogan fought back, claiming again that he was faced with another international conspiracy. This time the culprit was Fetullah Gulen, the Pennsylvania-based Turkish preacher who has a large following inside and outside Turkey.

Many Gulenists have for years been accused by secularists in Turkey of infiltrating the police force and the judiciary. Although Gulen was Erdogan’s principal ally in clipping the wings of the staunchly secularist Turkish military, he quickly became his nemesis and thousands of policemen, and prosecutors accused of being Gulen followers were dismissed or displaced in what amounted to a sweeping political pogrom.

This process intensified and continues today, after a damning wiretapped recording allegedly of Erdogan and his son discussing how to dispose of millions of euros was leaked in February, just prior to crucial local elections held at the end of March. There was no doubt in Erdogan’s mind that the Gulen movement, which he accused of having set up “a parallel state within a state,” was behind this leak also.

With the help of the pro-government media, Erdogan also turned the corruption probe into a “coup attempt” and as with the Gezi Park protests succeeded in convincing his grassroots followers. This became dramatically evident when he garnered nearly 45% of the vote in the local elections, causing shock and despondency among liberals and secularists.

Prior to the elections, he had banned Twitter and YouTube and used his parliamentary majority to put the judiciary under government control, reinforcing his international image as a leader with autocratic tendencies. But none of this hurt Erdogan politically at home, where he is now set to become Turkey’s first elected president.

Erdogan has not yet announced his intention to run in the Aug. 10 presidential elections, but the assumption within the AKP and outside it is that he will. He has also made no secret of his intentions to use executive powers if he becomes president, even if the current constitution does not allow for it.

There is speculation, perhaps amounting to wishful thinking, in some quarters in Turkey and the West that his severe mishandling of the recent Soma mining disaster might cost him his presidential bid or at least diminish his chances of getting elected in the first round of voting.

Pollsters such as Adil Gur, who predicted his victory in the local elections, however, say he is likely to win comfortably if he decides to run for president. If he does, these will be the ninth elections that Erdogan will have won since 2002.

Many argue that he will have used his proverbial nine political lives with these elections. No one can guarantee, however, that he will not have more left, and he clearly intends to be around politically until 2023, the centenary of the Republic of Turkey.

Given the present juxtaposition of political power in Turkey, the AKP is in a strong position to win the general elections slated for 2015, unless the opposition can come up with convincing platforms that will get the AKP voted out of power. The bottom line in all this is that Erdogan will not only have survived the Gezi Park protests, the corruption scandal and the Soma disaster. He will have also survived a prison sentence in 1999 for reading out a poem considered religiously seditious by the secularist establishment of the day, and a case against the AKP in 2002, after it came to power, for allegedly trying to overturn the secular system.

The reasons for Erdogan’s success are embedded in Turkey’s political past. David Gardner of the Financial Times captured one of the principal reasons for Erdogan’s popularity: "[Erdogan] addresses himself not to Turkey but what he calls 'my nation': the piously conservative Anatolian heartland to which his neo-Islamist party has given identity and a stake in the country’s wealth. His instinct is to polarize and, after eight victories at the polls since 2002, no one can prove to him it does not work." Put another way, the secular establishment, which often acted against the sensitivities of the devout, did much in the past to alienate the Anatolian heartland, from where Erdogan also hails and derives his main support.

Neither was the Kemalist order any more democratic than the AKP when it came to pluralistic democracy. It more often than not refused to protect the interests of the devout due to an ingrained and historic fear of Islamists — for example, banning girls from exercising their basic democratic right to higher education while wearing head scarves. Most members of the Kemalist elite also welcomed military coups designed to keep Islamists at bay politically, which also affronted the conservative masses.

The support Erdogan gets in the large cities also comes from the progeny of rural migrants who moved to urban centers over the past few decades — like Erdogan’s family — but who were generally voiceless until the AKP came to power in 2002 following a massive economic meltdown in the country.

It is no wonder, then, that Erdogan was so successful in clipping the wings of the secularist military through the power of the ballot box and can still turn the fear of coups to his advantage today. Erdogan also satisfies an ingrained Turkish desire for strong and predictable leadership, which is often valued more highly than Western-style pluralistic democracy and human rights, a characteristic shared by many secular Turks in the past and today.

In addition to all this, Erdogan pleases Turks of all shades when he stands up to the United States, scolds the Israeli president, tells off the German president or supports the Middle East’s oppressed masses while accusing a “supposedly democratic West” for failing to call the military coup against Egypt's democratically elected president by its name.

Meanwhile, the continuing growth of the Turkish economy under the AKP since 2002, despite warnings from credit-rating agencies that the situation remains precarious, has also worked to Erdogan’s advantage, as have the social benefits he has secured for the less privileged in areas such as health and education.

His critics may liken him to Hungary’s Prime Minister Viktor Orban, Russia’s President Vladimir Putin or Italy’s former Prime Minister Silvio Berlusconi (without the sex, of course), but Erdogan has shown he has staying power, and the world will have to contend with for some time to come.

The Gezi Park events will also continue to reverberate for years in Turkey, of course, and will be marked with demonstrations that turn violent in the face of government intolerance and police brutality. We saw fresh examples of this only in the past few days in Istanbul’s Okmeydani district. An undaunted Erdogan, nevertheless, appears unstoppable for the foreseeable future.

Meanwhile, it is Turkey’s democracy, which has traditionally been unstable anyway, that will continue to bear the brunt of his rule. It seems, however, that a sufficient number of Turks able to keep Erdogan in power are not losing much sleep over this prospect.