Erdogan Is Right on Egypt

It was a coup and a setback for democracy, not a revolution. 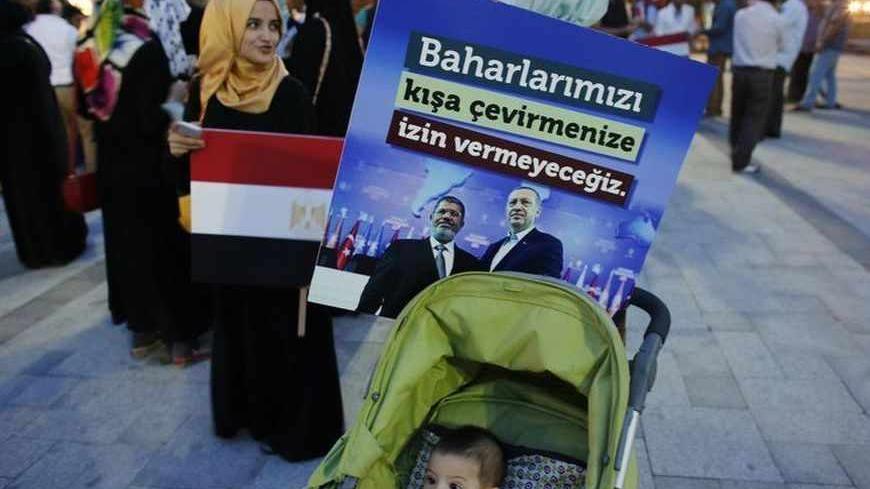 A poster with the pictures of Egypt's President Mohammed Morsi and Turkey's Prime Minister Recep Tayyip Erdogan (R) is attached to a baby stroller during a pro-Islamist demonstration in Istanbul, July 1, 2013. - REUTERS/Murad Sezer

The military coup in Egypt is a hot issue in Turkey these days. (Yes, it is a coup, not a "revolution." The latter happens when masses topple regimes, but when generals depose and detain an elected president, while arresting, torturing and killing his supporters, that is called a coup.) News and commentary about what is happening in Cairo currently dominates Istanbul’s media, Ankara's political rhetoric and tweeting all across Turkey.

The reason for such passionate focus on Egypt is not a deep knowledge about this large Arab country. In fact, only a handful of Turks can speak Arabic well, something actively discouraged by Ataturk's education system, and most of those who comment on Egypt wouldn't even be able to name the main political actors. Rather, Turks are interested in Egypt because when they look at what's happening there, they see themselves.

One thing is quite clear: The incumbent Justice and Development Party (AKP) and its supporters strongly identify with the Egyptian Muslim Brotherhood and Mohammed Morsi, the deposed president. In the past few weeks, some AKP members have even begun to use photos of Morsi on their Twitter profile.

This is interesting, because if there is any Turkish political line to which the Muslim Brotherhood corresponds, it is that of the late Necmeddin Erbakan, the old Islamist school that AKP founders abandoned for a more liberal, reformist and Western-friendly approach. (The old school is now represented by the marginal Felicity Party, led by Erbakan's young and inexperienced son, Fatih Erbakan.) Regardless, the political and religious sentiments of the AKP resonate with their less reformed brethren in Egypt.

On the other side is the secular camp, under a large umbrella that includes Kemalists — or, say, the Turkish feloul — socialists, ultranationalists and even some liberals who once supported AKP leader Recep Tayyip Erdogan. (Some liberals still support the AKP, albeit with growing criticism.) Even in the secular camp, however, there have been only a few endorsements of the coup, while the main opposition leader, Kemal Kilicdaroglu, openly opposed it. After experiencing four coups in the past half century, Turks' support for civilian rule seems to have become the norm.

The secularists’ take on Egypt is still quite different from that of the AKP, though. While the AKP only condemns the coup and its supporters, the secularists blame Morsi for bringing it on himself. Moreover, when the latter criticize Morsi’s “majoritarianism,” “power grab” or “Islamic agenda,” they are actually talking about Erdogan and warning him of similar tendencies. They, in other words, identify the AKP with the Muslim Brotherhood, despite the significant differences between them.

Meanwhile, the AKP and its supporters use the coup in Egypt to defend their view that the Gezi Park protests that shook Turkey in June were in fact a similar “coup scheme.” They view the entire Gezi Park story as a made-in-the-West plot to topple Erdogan. So, when the same West exhibits a double standard regarding Egypt, shying away from calling the coup a coup, it becomes proof of the conspiracy. They see the West, through its secular puppets, as attacking elected Islamists on both sides of the Mediterranean.

There are holes, however, in this conspiracy theory. First, it neglects the role of the Salafists and their big-time patrons — Saudi Arabia and a few other Gulf states — in the Egyptian coup. Second, it disregards that not all anti-Morsi actors in Egypt see the West as their staunch ally. A case in point is the reaction of pro-coup Egyptians against Western media, particularly CNN International, for their "lies" (i.e., reports) about the military's brutality. Pro-AKP Turks should recall that they themselves were angry at "CNN's lies" just a few weeks ago, in light of reports about Gezi Park. The situation is actually tragi-comic, because when one goes to such Twitter hashtags as #stoplyingCNN or #CNN_STOP_Lying_About_Egypt, one finds both Islamist Turks and secular Egyptians angry at CNN for opposite reasons.

This conspiratorial reading of world events is, of course, wrong. No wonder that it led the AKP to make serious mistakes during the whole Gezi Park crisis. Putting this distracting element aside, however, the AKP's stance on Egypt has been fundamentally right: Yes, what happened was a coup, and it cannot be sugarcoated as anything else. And yes, most Western governments that claim to believe in democracy have, once again, proven themselves to be hypocritical. They have shown that they do not like democracies that empower the people whom they do not like.

This is not to endorse Morsi's rule or the Muslim Brotherhood's ideology. It would be preferable to see them behave rather like Tunisia's Ennahda movement, which has been reconciliatory, compromising and, most important, non-imposing. Yet, the Muslim Brotherhood — despite its mistakes and shortcomings — is a reality of Egypt, and the only way for Egyptian politics to move forward is to include and respect it in the fair rules of the democratic game. The recent coup has been grossly unfair, and, it must be added, grossly unwise.