Why Turkey Has 'Anti-Capitalist Muslims'

İhsan Eliaçık, the group's leader, believes that the Islamic duty is not just caring for the poor, but overthrowing the capitalist “system” that he thinks makes them poor. 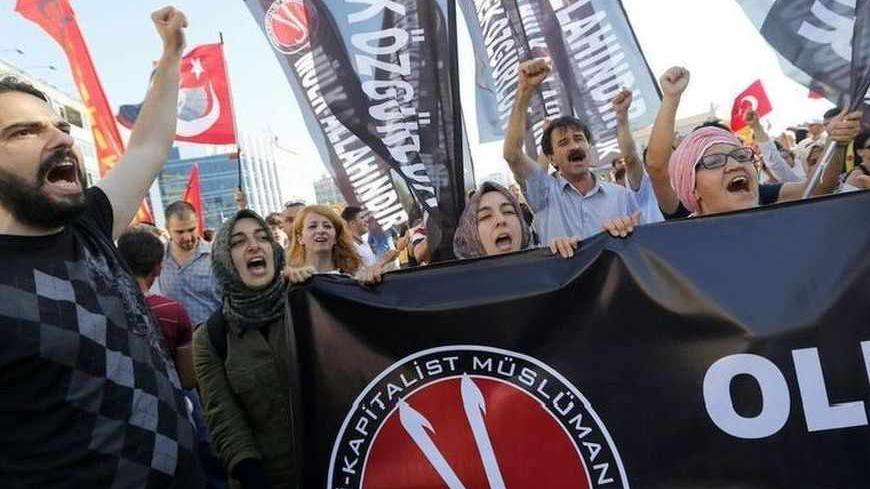 Among the various groups that joined the Gezi Park protests that shook Turkey in June, probably none was as unconventional as “Anti-Capitalist Muslims.” In the midst of avowedly secular Turks — ranging from liberals to communists, Kemalists to gay activists — they raised an “Islamic” voice against a government that is often perceived to be too Islamic. More recently, they even organized a mass iftar (fast-breaking dinner) which blurred all the classical Turkish distinctions between the religious and the secular, as described nicely in Fehim Taştekin’s Al-Monitor piece, “Turkey’s Gezi Park Protesters  Regroup for Ramadan.” Hence they deserve a closer look.

The Anti-Capitalist Muslims are actually a very small group, whose frequenters are probably not more than a couple of hundred. As explained in their website, they see capitalism as “the enemy of God, the enemy of humanity, nature, the poor, the starving and the needy.” They had made their first public appearance in the May Day celebrations in Istanbul in 2011, by joining a large left-wing, mostly Marxist crowd with Quranic verses in hand. Since then, they have attracted the attention of the media with demonstrations and TV appearances.

In fact, all this is the brainchild of one man: İhsan Eliaçık, a theologian whose writings and lectures have created a following over the decades, especially in the past several years. He is, by most definitions, an Islamic modernist who believes that the Islamic tradition should be reformed and the Quran should be interpreted in the light of the modern age. One of his key messages is that traditional Muslims focus too much on rituals and forget the “social activism” that the Quran asks from believers. In other words, he thinks that taking care of the poor is a more important Islamic duty then the minute details of the dress code.

These are ideas that most Muslim modernists would embrace, but İhsan Eliaçık puts an additional layer on them: an Islamo-Marxist reading of the economy. He believes that the Islamic duty is actually not just caring for the poor, but overthrowing the “system” that he thinks he makes them poor, which is none other than “capitalism.” He even believes that the Quran condemns private property, and rather envisions a society in which property would be willingly shared and labor equally rewarded.

Of course, this is not the only Islamic view of the economy. Others, including me, think that actually Islam since its beginning has promoted a free-market economy whereas its insistence on social justice does not equal socialism. Turkish scholar Murat Çızakça, among other scholars who wrote on the topic, even argues that the basic sources of Islam and the historical practice of the Muslim community calls for an “Islamic capitalism.”

Yet the practical question is not whether Islam is closer to socialism or capitalism. It is why “Anti-Capitalist Muslims” emerged in Turkey at this historical juncture. The answer is actually not too hard to find: Because the majority of Turkey’s conservative Muslims, who vote for the Justice and Development Party (AKP) of Tayyip Erdoğan, have been engaged in a golden era of capitalist growth. In fact, the goal “development,” which is in the AKP’s very name, has probably been the main feature of the governing party in the past decade, with enormous advances in construction, infrastructure, health care, investment, and job creation.

That is why Turkey’s leftists have been criticizing the AKP not only for its moral conservatism (or Islamism, if you will), but also its “neo-liberalism,” which manifests itself as the privatization of state enterprises, welcoming of foreign investment and liberalization of the labor market. One such critic, Aslı Iğsız, an assistant professor of Middle Eastern and Islamic Studies at New York University, voices these criticisms in detail in a recent piece. She, for example, complains that “AKP officials actually appear to approach Turkey as a product, or more accurately, as a ‘brand name’ to be protected.” Ultimately, she concludes that the real trouble with the AKP is not its Islamism, but its “neo-liberalism":

“While Turkish neoliberalism, operating under the AKP, has its own idiosyncrasies, the shape its authoritarianism has taken is informed as much by transnational as by local dynamics of capitalist and political interests and divisions.”

In fact, the Gezi Park protests were a good manifestation of this left-wing reaction to AKP policies. What the initial protestors opposed to was the demolition of the Gezi Park, a green area near Istanbul’s Taksim Square, on which Erdoğan wanted to rebuild old Ottoman military barracks that would serve as a shopping mall and residences. Protesters saw this as yet another encroachment of private capital on public space, and initiated an “Occupy Gezi” campaign, clearly inspired by the Occupy Wall Street movement. (Later, protests were partly calmed when Istanbul Kadir Mayor Topbaş announced, “Neither a shopping mall nor a residence or a hotel will be built.”) Moreover, when some of the protesters met with government officials, they demanded an end to the construction of Istanbul’s new (and huge) airport, too, out of environmentalist concerns.

In other words, neither the Gezi Park protests in Turkey nor the larger political tension they manifest are simply a confrontation between Islamist and secularists, as it has often been perceived. Erdoğan’s assertive moral conservatism and secular-liberal reactions to it, are certainly a part of the picture. But there is also the more global tensions between the right and the left, or the newly rising classes and the older elites. There is also the effect Erdoğan’s confrontational persona, which has created a society divided between those who love him or hate him.

Meanwhile, Islam, while it certainly resonates more on the AKP side than the other, cannot be limited to the former camp, as seen in the anti-AKP stance of Anti-Capitalist-Muslims. These Muslim socialists will probably not be able to bring their collectivist utopia to reality, but they have at least shown to many Turks that Islam (like all other religious) can have very different political manifestations to none of which it can be reduced.