The Religious Voice of the Chapuls

The Anti-Capitalist Muslims have emerged as the most extraordinary group in the Gezi Park protests, legitimizing the revolt in religious quarters. 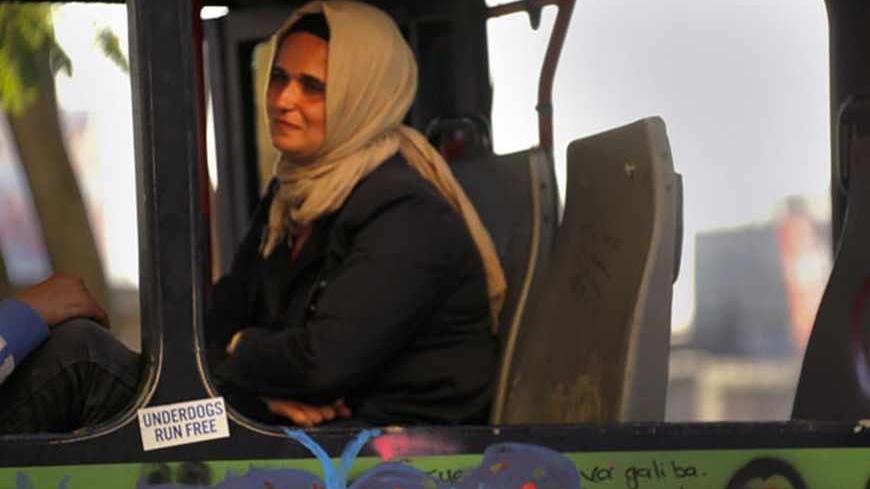 A woman wearing a traditional headscarf sits inside a damaged bus used by anti-government protesters as a barricade in Istanbul's Taksim Square, June 10, 2013. - REUTERS/Yannis Behrakis

“Thank you for supporting the protesters. So glad to have you here,” a non-veiled woman told theologian Ihsan Eliacik in Taksim Square as she shook his hand. Another followed. The group of people surrounding him grew by the minute. The support Eliacik extends to the protests by reciting verses from the Quran has been universally welcomed — from atheists and socialists to Kemalists and hard-line secularist-nationalists.

The government apparatus has used a determined tactic of “demonizing” the protesters in a bid to prevent the spread of the demonstrations gripping Turkey for days. Conspiracy theories have been fabricated to portray the protests as a plot by those who were behind the “post-modern coup” in 1997 or the “Ergenekon network.” Had the Gezi events been a revolt only stirred by Ataturkists, secularists, nationalists, marginal leftist groups and supporters of the main opposition Republican People's Party, this would have played into government hands. But that is not the case. Though a small group, people as pious as Prime Minister Recep Tayyip Erdogan have become “the religious voice of the revolt.”

Standing out among them are the Anti-Capitalist Muslims, inspired by Eliacik’s ideas. The group provided the “ticket” to Taksim for devout people who waver between the Islamist-rooted government and the protesting masses driven by worries over their secular lifestyle. Thanks to their support, the protesters — described as “a rotten, wrecked generation” by prominent Islamic cleric Fethullah Gulen, but whom I prefer to call “free spirited souls” because of their non-partisan profile — gained legitimacy in the eyes of other quarters.

The Gezi Park’s initial outlook was repellent enough to keep away the devout. Many protesters held beer cans to manifest their anger over government restrictions on alcohol. Istiklal Avenue, leading to the gassed Taksim Square, was littered with empty bottles. The protesters, however, quickly pulled themselves together when Erdogan targeted them as “drunkards.” The youths defied their portrayal as bums and revealed the smart, creative, embracing and tolerant side of a new generation that has not yet been embroiled in a secularist-Islamist conflict. This made room for the devout in Taksim Square and the small number of Islamists participating in the protests became more visible.

With a Besiktas soccer team scarf around his neck, Eliacik recited prayers to mark Mi’raj on the evening of June 5 as the protesters offered “kandil simits” — ring pastries consumed on holy days — to people who visited Taksim throughout the night. The simits were like small rings connecting the secular and the devout. The group joined the Gezi protests with the following motto: “I’m neither a nationalist, nor Kemalist, nor socialist. I’m a Muslim opposed to capitalism. I criticize the hegemony. I don’t question the faith of the person resisting alongside me.”

Hardly any other messages and slogans have been more scathing to the government than those of Eliacik. Here is one of his most retweeted messages about the plan to build a shopping mall, a luxury condo building and a mosque in Taksim Square: “The conservative bigwig’s understanding of a square: 1 - shopping mall, 2 - luxury condo, 3 - mosque. That is, he will: 1- stuff himself, 2 - philander, 3 - pray for repentance.”

For Eliacik, who joined the protests together with Carsi, the ultra-fans of the Besiktas soccer club, the Gezi events signify the togetherness of opposites versus the culture of conflict: “Gezi is teaching respect — simultaneous respect for the atheist and the believer, for the Turk and the Kurd, for the miniskirt and the headscarf.”

Regret for voting for the AKP

The group, united under the motto “Allah, bread, freedom,” first came to public attention in 2011 as the Labor and Justice Platform when it launched protests against Ramadan fast-breaking dinners in luxury hotels. Later, it took the name of Anti-Capitalist Muslims. In 2012, it drew attention by attending May Day demonstrations, traditionally dominated by leftist groups. The same year, the group held prayers at the Fatih Mosque for laborers killed in work accidents and marched to Taksim. The small group that started the march became a crowd of some 1,200 people by the time it reached Taksim. They were out again on May Day this year but, like all others, were stopped from marching by police. Nine months ago, they founded the Association for Anti-Capitalist Struggle and became a legal organization. The association has constantly grown, opening branches in 15 provinces.

The Anti-Capitalist Muslims represent growing resentment against Islamists who got wealthy through nepotistic and clientelist means during Justice and Development Party's (AKP) decade-long rule, moving from provincial areas to urban centers, living in luxury villas and driving expensive cars. The group sees the shopping malls as “the temples of capitalism.”

Eliacik, a former Erdogan supporter, spoke to Al-Monitor about how the group emerged. “I voted for the AKP in 2002 because it represented change. I withdrew my support the following year and focused on writing books. Starting in 2008, I began to voice opposition openly as I saw how people around me got rich through government favoritism and became contaminated by power. The movement took shape spontaneously. Those who cared about my ideas came together and got organized,” he said.

Eliacik describes himself not as the leader of the Anti-Capitalist Muslims but the “intellectual pioneer” of the group. “I don’t interfere with the decisions. The youngsters make the plans, and then I just do what is up to me,” he said. In response to why they actively joined the Gezi revolt, he said, “The government is trying to create the impression that the people here are enemies of religion. We are here to show this is not true. We are small in number, but the power of our words is strong and we have great moral support.”

Eliacik believes the Gezi protests will give birth to a brand-new political, cultural and social current of mutual tolerance, embracing many different segments — from Islamists to secular leftists and Alevis to Kurds. An opinion poll conducted by Istanbul’s Bilgi University among 3,000 protesters, provides clues about what kind of movement could emerge.

Gezi Park has become a kind of communal platform for political ideas which would normally never have appeared side by side. Undoubtedly, its transformation into a lasting political movement, as Eliacik hopes, is not that easy. Yet, there is no reason not to hope for a common culture that could hold diversity together.

Fehim Tastekin is a columnist and chief editor of foreign news at the Turkish newspaper Radikal, based in Istanbul. He is the host of a fortnightly program called "Dogu Divanı" on IMC TV. He is an analyst specializing in Turkish foreign policy and Caucasus, Middle East and EU affairs. He was founding editor of Agency Caucasus.