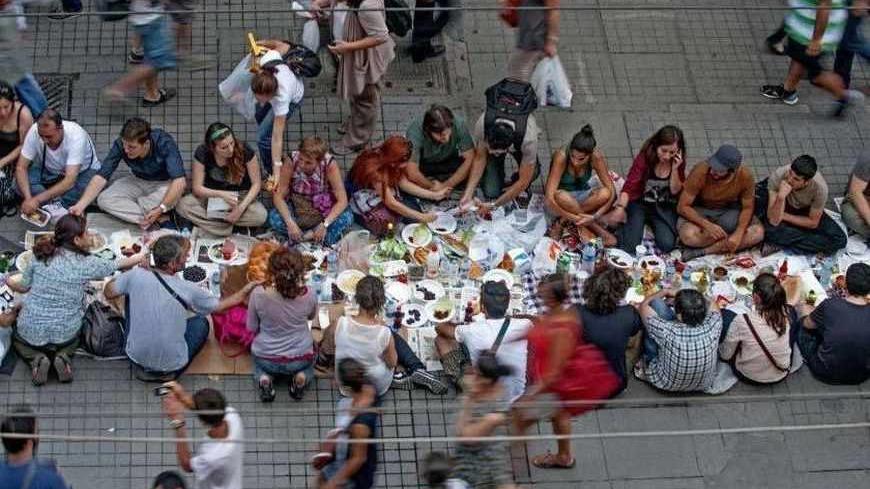 The spirit of Turkey’s Gezi Park protests has brought the profane world to its knees — down to Ramadan "iftars" (dinners to break day-long fast) on the sidewalk. The protests, sparked by anger against the government’s patronizing and majoritarian policies, continue to add novelties to Turkey’s political and social landscape. And each time, we are baffled to see what the Gezi spirit is capable of. The divine grace and mercy of this year’s Ramadan is upon the rebels of the leftist, atheist or secular world! The “religion card” Prime Minister Recep Tayyip Erdogan has used in his black propaganda campaign to discredit the protesters is slipping through his fingers!

When protesters took refuge in the Valide Sultan Mosque to escape the police’s pepper spray and water cannon vehicles, or TOMAs, Erdogan exploited the mosque politically, accusing the protesters of having entered it with their shoes on and imbibing booze inside. The most powerful answer he got are the “earth tables” set in the streets for iftar. And that’s Gezi’s irony of fate.

The first “earth table” was set on Istiklal Avenue, the city’s main and best known shopping avenue, starting from Galatasaray Lycee and stretching all the way to Taksim Square, where pepper spray and water cannon vehicles waited — lean and mean — to spray protesters. People came with modest food packets for the meal, responding to calls by the “Anti-Capitalist Muslims” and “Revolutionary Muslims” groups. Fasters were joined by many who fasted for the first time in their lives or were not fasting at all. In Nilay Vardar’s words, “The menu included ‘reasonable’ portions of everything — from burghul salad and stuffed vine leaves to pizza and dates.” The second “earth table” was set at Sarachane Park in the Fatih district, while the third was set at the Sarigazi Cemevi to show solidarity with the Alevi community, long ostracized by conventional Sunnis. “Earth tables” will be set at different locations each evening throughout Ramadan.

For years, Istanbul’s municipalities have erected Ramadan iftar tents, where state and people mingle, sponsors advertise themselves and money mixes with prayer. The “earth tables” challenge this concept, with the contrast reflected in three slogans: “The luxury iftar of the rich: capitalism,” “The iftar tents of the hegemons: exploitation” and “The people’s earth tables: freedom.”

Driven by the spirit of those slogans, people of different worlds, who had so far ostracized each other, broke bread together. As they sat on the pavement and ate what they had brought from home, the Beyoglu Municipality seemed determined to not let them steal the show. Recruiting the services of a catering company, it organized an iftar on Taksim Square — with tables and chairs. A walking distance apart, the two iftars were in stark contrast.

Asked about the idea behind the “earth tables,” the intellectual leader of the Anti-Capitalist Muslims, Ihsan Eliacik, gave the following answer: “The iftar tents are erected by the state. We are against those tents as they tie people to the state through a bond of exploitation. We are equally against the sponsored tents and the expensive iftars at luxury hotels.” Hadiye Yolcu, an activist in the movement, added, “We, the Anti-Capitalist Muslims and the Revolutionary Muslims, are acting as leaders only in terms of calling the event. The people themselves set the tables. We do not discriminate between those who fast and those who do not. There are many who say they do not fast but are willing to join. We are inviting everyone.”

Journalist Burak Kuru, who dined on an “earth table,” shared his observations for Al-Monitor: “All people there had a true desire to join a meal which they had just passed by before. People realized that being together for this meal felt better than many other things. And not all diners had actually fasted. Some simply chose to eat at iftar time and dined together with the others. The people there included just anybody in the street, except for those the prime minister said was ‘hardly restraining at home.’ I’ll never forget the hospitality and kindness they offered to passersby. The people demonstrated they need no mediator to communicate. It was as if they were saying, ‘We need no one to preach us how to have an iftar.’”

“An earth table for equality, justice, freedom and fraternity” is a kind of a challenge that Erdogan would find hard to confront. He has so far refrained from doing so, but there is still time to go before the end of the Ramadan. … The pro-government media, however, was not as patient. Newspapers splashed on their pages the photo of a man holding a beer bottle at an “earth table” and decried the “scandal.”

Hikmet Genc, a columnist for the Star daily, lashed out at the Anti-Capitalist Muslims, saying, “Never before had the world seen such exploitation of religion.” He also ridiculed the “hoodlums”: “How times change! For hard-line secularists, Ramadan used to be the month when Islamist reactionary resurrected! Now, those who used to insult Islam have all become mujahedeen! And that prime minister is truly a great man! When he spoke of (raising) a ‘pious generation,’ you raised hell. But you, hoodlums, have become the first whom the prime minister managed to bring to piety. No wonder if even Hayko becomes a Muslim soon!”

Hayko Bagdat, the ethnic Armenian journalist and Taksim Solidarity member Genc was referring to, retorted in a Twitter message: “At our commemorations, our brothers shout ‘We are all Armenians.’ And when TOMAs attend their iftars, we are all Muslims.”

Haberturk columnist Nihal Bengisu Karaca, for her part, discerned in this show of solidarity the story of people discovering the divine truth, even though no one has really stepped back from their ideological convictions. Tinging her lines with sarcasm, she wrote: “In the past, they would preach about the harms of fasting each year the Ramadan arrived. Some would even treat fasting co-workers as lepers. Then things changed: A movement upholding the people’s values rose to Turkey’s helm. Things have changed so much so that in order to defy that will, they are now compelled to set iftar tables. They incited the people to revolt, crying out for a ‘civilian coup’ or a revolution. But as they failed to garner support, they are now trying a new initiative by choosing the iftar table as a venue of resistance. Some say ‘the AKP iftars are palace iftars,’ seeking to foment divisions and smear the peace and tranquility of the Ramadan with hate speech. Yet, everything is crystal clear: All that is happening is the wisdom of Allah. A wisdom bestowed on them by the way of the AKP. The diners at the street iftars are saying that ‘if you patronize me with piety, I would be even more pious than you.’ Their passion in this endeavor is leading them to the truth. After all, one does not need an address to discover the divine light.”

In the past, Islamist intellectuals were the ones to complain most of alienation and seek reconciliation between people of different worldviews. Today, the government’s acrimonious rhetoric has brought together the devout and the opponents of religion. And it is again the intellectuals of Islamist quarters who ridicule this rapprochement most. It must be the effects of power.

Fehim Taştekin is a columnist and chief editor of foreign news at the Turkish newspaper Radikal, based in Istanbul. He is the host of a fortnightly program called “Doğu Divanı” on IMC TV. He is an analyst specializing in Turkish foreign policy and Caucasus, Middle East and EU affairs.