Who Are Turkey’s Protesters? The View From Taksim Square

An eyewitness report from Taksim Square in Istanbul. 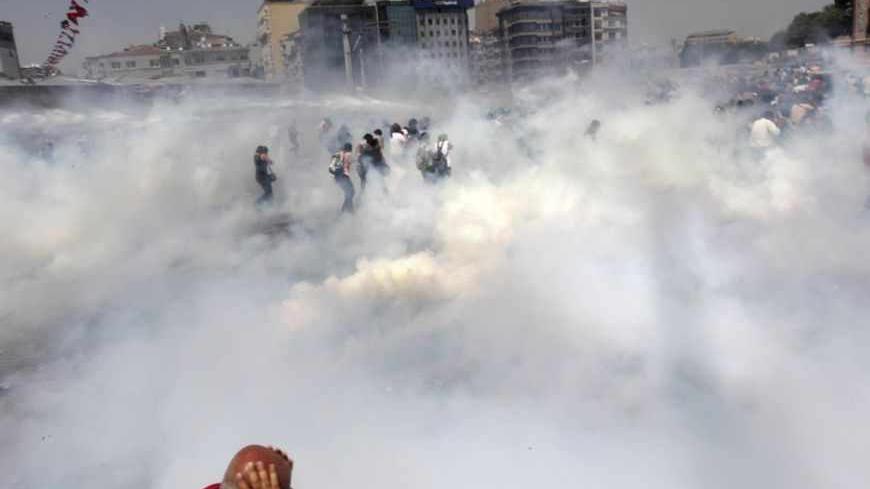 Riot police use tear gas to disperse the crowd during anti-government protests at Taksim Square in central Istanbul, May 31, 2013. - REUTERS/Osman Orsal

I was, in my capacity as a reporter, among the thousands of citizens who thronged the streets of central Istanbul on May 31 in what some are labeling “A Turkish Spring” and “A Turkish Occupy” movement. Other commentators have resorted to the lazy old clichés of “secularists versus Islamists.”  Turkey’s Prime Minister Recep Tayyip Erdogan insists they are "provocateurs."

None of these capture the nature of protests that have engulfed the country. These began when police staged a predawn operation on May 31 to disperse citizens who were demonstrating peacefully against a government-backed development project that would uproot dozens of trees in Taksim Square. The diversity of the protesters defies any such neat categorization.

It was close to 8 p.m. as I inched my way along Istiklal Avenue, one of the main commercial arteries leading up to the square. When I hit the historic Francophone Galatasaray Lycee, the crowds grew. I could barely move. Amid all the clapping and chanting, there was one common refrain, “Erdogan resign! Government resign!”  Early on, I encountered a group of young men and women who were all wearing the same white and yellow masks to shield themselves from the acrid stench of tear gas that pierced the air. They said they worked for an advertising company. "Our boss printed special T-shirts for us and gave us the masks; he encouraged us to be here,” Selin Bayraktar told Al-Monitor.

“We initially joined the demonstrators to protect our trees, nothing political,” explained Bayraktar. But when Erdogan, “imperiously” waved aside their objections, declaring that the project would proceed, “something snapped,” she said. “We are not for or against any political party, we are against dictatorship, Erdogan is a dictator, write this if you dare.”

Farther on, members of the main opposition Republican People’s Party (CHP) linked arms to form a human chain. There may have been around 50-60 of them. I couldn’t quite tell, but they were a minority. Ilhan Cihaner, a CHP lawmaker, nodded at me bleary-eyed. “Pepper gas,” he said. “The protests will continue until the park is saved. But it's not just about the park, it's about this repressive regime: People are fed up. They have to go.” Never mind that CHP members on the city council voted in favor of the project. Time to move on.

As I get closer to Taksim, the smoke thickens. I feel dizzy and my lungs begin to burn.

The scenes are increasingly chaotic. Water cannons spray the crowd. Police in riot gear are dragging a man toward an armored van.

“For me, it's only about the trees, nothing else. I voted for Erdogan,” piped up an unfazed 30-something housewife, her hair covered Islamic-style. “Destroying all the green space, where will my kids play? It's not right.” And her name? “No need,” she responded as a youth with a pierced nose and tattooed arms sprayed a milky liquid on her face.

“It's for the tear gas,” he explained. His name was Mert and he was in his final year at the nearby German Lycee. Were his parents worried about him? “No, they support me. Look, we are talking about one and a half million trees.” What? Had he seen the park? It couldn’t even fit a hundred, let alone a million. Disinformation, it seemed, was flowing as fast as the gas. He shrugged and continued to spray.

Above the din, one slogan sounds awfully familiar: “Azatutyun,” the word for “freedom” in Armenian. It's being chanted by a handful of Istanbul Armenians who say they are taking part because they are opposed to the destruction of the park. “The park and all those hotels on top of an Armenian graveyard,” says a young woman I know called Melis Tantan.

A slender girl with a headscarf and a knee length raincoat catches my attention. Her name is Busra Guney. The 17-year-old is in her final year at the nearby Kagithane clerical training school. “It's always about money, cutting trees for money, its not Islamic,” she says.

Her words remind me that an Islamic group called Anti-Capitalist Muslims is also among the protesters, though I did not run into any. Their presence ought to worry Erdogan more than any other because, as they see things, AKP’s embrace of cowboy capitalism runs roughshod not just over the environment but over Islamic principles as well.

My overall impression, and it’s commonly shared, is that the Taksim Park project has morphed into a vehicle for popular resentment against Erdogan’s increasingly dismissive and authoritarian ways. Under a decade of AKP rule, Turkey has become the world’s top jailer of journalists. Its interventionist policy in Syria is causing alarm. The systematic and disproportionate use of force against the slightest display of dissent obscures that the AKP was democratically elected and remains the most popular government in modern Turkish history. Yet, egged on by the slavishly self-censoring Turkish media, Erdogan seems increasingly out of touch.

Be it through restrictions on alcohol or disregard for the environment, people who do not share Erdogan’s worldview are being made to feel like second-class citizens. The sentiment is especially strong among the country’s large Muslim Alevi minority whose long-running demands for recognition continue to be spurned much as they were by past governments.

Hard-core secularists who massed in the district of Kadikoy, a CHP stronghold on the Asian side are keen to paint the protests as a backlash against the “Islamist” AKP. It's not just CHP supporters who feel their lifestyles are being infringed upon. Conscientious objectors, atheists and gays, almost anyone who falls outside the AKP’S conservative base is feeling squeezed. The majority, however, are sick of old-style politicians and their tired ideas. So where will they go? The question is growing ever more pressing in the run-up to nationwide local elections that are to be held next year.

Erdogan’s political fortunes hinge on how the government handles the crisis. Pulling back the police and allowing the crowds to gather on the second day was a step in the right direction.

Turkey is not on the brink of a revolution. A Turkish Spring is not afoot. Erdogan is no dictator. He is a democratically elected leader who has been acting in an increasingly undemocratic way. And as Erdogan himself acknowledged, his fate will be decided at the ballot box, not in the streets.