Berkin Elvan, who on June 16 was hit in the head by a tear gas canister, died on March 11, becoming the symbol of people seeking justice. 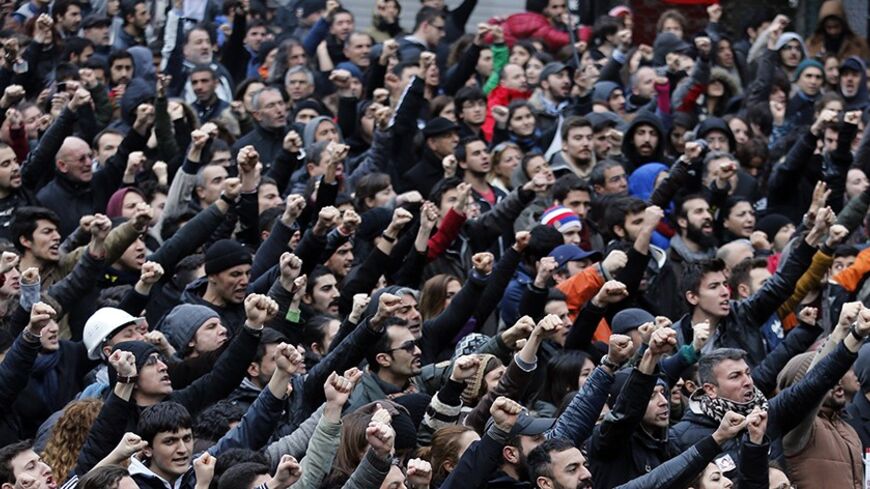 A sea of people hit the streets of Istanbul on March 12, to bid farewell to Berkin Elvan in one of this country’s most crowded funerals. This boy was only 14 when he was hit by a tear gas canister in the head in his Okmeydani neighborhood on June 16, during the time of the Gezi Park protests; he had left his home to buy a loaf of bread for the family. “Mom, your leg is disabled. If something happens, you won’t be able to run. Let me go. And if I see my friends on the street, can I bring them to breakfast?” became his last words. He stayed in a coma for nine months, or a total of 269 days, and lost his battle early in the morning of March 11; his weight had fallen to 16 kilos (35 pounds), down from 45 kilos (99 pounds). His death, the ninth linked to last year’s protests — which began as a result of irreconcilable policies involving Istanbul city planning between the government and the public — has become the symbol of people seeking justice.

Just a few hours after Berkin Elvan was rushed to the hospital last year, Turkish Prime Minister Recep Tayyip Erdogan addressed a huge crowd in Kazlicesme where he termed the rally “Respect to National Will.” This also was a part of the ruling Justice and Development Party’s (AKP) official launch of the local elections campaign scheduled for March 30.

Erdogan was furious. “We know very well who sent 30,000 food boxes to Taksim, sheltered the terrorists in their hotels and the provocateurs of the social media,” the prime minister said. “We will identify one by one those who have terrorized the streets of our cities. We have all recordings of city surveillance footage. We will trace the media and social media to find those who have provoked incidents,” he added, praising the crowd in his rally: “These hundreds of thousands of people are not the ones who have burned and destroyed; these hundreds of thousands of people are not traitors like those who throw Molotov cocktails at my people. Whatever we do, we will remain within the frame of democracy and the rule of law. We have never pushed the limits of legality.”

On March 10, however, Turkish media reported that police officers who testified on Feb. 6 couldn’t remember where they were or what they were doing on the day when Berkin Elvan was severely wounded in the head; police did not bring those responsible for the incident before a judge. Also on March 10, police used heavy tear gas to disperse a crowd of about 20 people who had gathered at the hospital in support of his survival. As the news hit the traditional and social media that even hospital corridors had been filled with tear gas, resentment multiplied. That eventually awakened President Abdullah Gul, and he became the first state official to phone the family — after 268 days — to express good will and speedy recovery for Berkin Elvan. The boy died the next morning. Erdogan has yet to extend his condolences.

On the day when Berkin was hit, Erdogan referred to all the protesters as terrorists. Berkin was not even protesting a thing when he was struck in the head by the tear gas canister. But it is not the facts that matter, or the common sense that should suggest that people have a constitutional right to protest, and no one should have to risk their life while doing so. Radikal daily, however, reported on July 17, “Gulsum Elvan is reacting against the initial police report that suggests they found explosives on her son when he was brought to hospital and the efforts to show him as a member of a terrorist organization. During last week’s demonstrations against the Council of Higher Education (YOK), protesters who were taken under custody were accused of praising a terrorist organization because they carried banners stating ‘Berkin Elvan is our pride.’”

Erdogan’s supporters certainly agree with this line of thinking. Twitter user R.S.4 @vosvoscandir sent out this today: “It looked too much of a work of the parallel state to me — stay in coma for some 250 days, then die just 19 days before the local election #GeziProvokatorleriIsBasinda.” That hashtag means "Gezi provocateurs are at work." Interestingly Ak Parti Social Media @AkPartiMedia used the same hashtag in tweets today. For example, it wrote, “#Gezi Provocateurs Are At Work Well Done! #BerkinElvan #SehitVatanUgrunaCanVerendir.” That last hashtag means "a martyr is the one who dies for his country." There were even those like Seneray Kilincarslan, who tweeted: “These are the Alevis of Armenian origin. Ottomans threw their grandfathers away, and these are the remaining Armenian bastards.” Or, Omer Faruk Ayar, who tweeted: “What was he doing there? So, he got his lesson!”

That said, some members of the AKP extended their condolences. Bulent Arinc said even those who remain silent on this day — perceived as direct reference to Erdogan — also is saddened by this boy’s death. Istanbul Gov. Huseyin Avni Mutlu (@ValiMutlu) tweeted: “I wish from the heart that funeral proceeds according to this respectable family’s grief and desire and that we do all we can to facilitate it.” Many reacted harshly to the governor, demanding that those who killed Berkin be brought before a judge.

Gulsum Elvan also cried out today that it was not God’s will who took her son away, but rather the police who killed her son, and she kept demanding justice. There were also times during the long funeral procedure where people chanted “Killer Erdogan!”

The prime minister, however, today rallied in Siirt, reminding the people of his 3½ months imprisonment in 1998 at the Pinarhisar prison for reading a poem that was considered provoking people to religious hatred, and asked whether he killed someone. “Remember, I spent time in Pinarhisar. What have I done; did I kill someone? Did I steal something? What have I done? … That era is now over. This is a new era.” He continued, “It was first the Gezi Park protests. It is now Dec. 17, Dec. 25. These are all coup attempts against the new Turkey. I want you to know this. In the Gezi protests, [saving] trees or [being conscious about] the environment were just excuses. … What happened? … The road map in democracies is the ballot box. If you have the power, you will win there. If you’re not going to [the] election, you’re disrespectful to the people.”

Today’s crowds commemorating Elvan's death, however, were not only in Istanbul but also in Ankara, Izmir and elsewhere, reminding Erdogan that being elected to office does not give him the right to do whatever he wants. Yet, there was again heavy police intervention with copious use of tear gas and water cannons on streets across the nation. The people continue to demand that Erdogan abide by the principles of democracy and uphold the rule of law. People are demanding that the police officers who were responsible for Berkin Elvan’s death stand trial, and they do not want the prime minister to be able to escape corruption charges by not appearing before a high council set forth by the parliament. Erdogan’s unwillingness to do so seems to have multiplied people’s rage since the Gezi Park protests.

The opposition party leaders also call for Erdogan to truly respect the rule of law. Both Kemal Kilicdaroglu, the leader of the Republican People’s Party (CHP) and Devlet Bahceli, the leader of the Nationalist Movement Party (MHP) consider Erdogan responsible for Berkin’s death, recalling how the prime minister had praised the work of the police forces as heroic during the Gezi Park protests. Still, the legislative leaders called on people to stay calm and avoid any kind of provocation.

In sum, Turkey‘s divide between Erdogan followers and the others just got deeper and people on the latter side are on the verge of losing their faith in justice. What this all will mean for the upcoming local election due on March 30 is yet to be seen.