Why has Turkish Prime Minister Recep Tayyip Erdogan not yet expressed contrition or condolence for the death of Berkin Elvan? 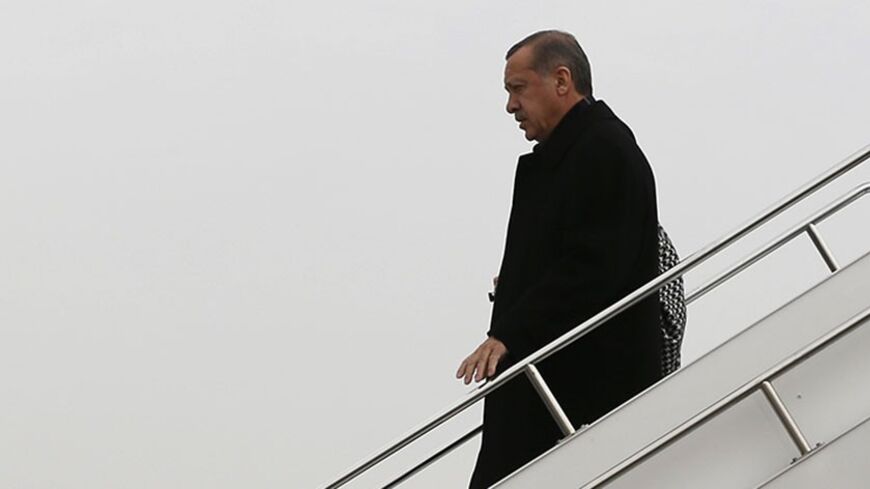 Turkish Prime Minister Recep Tayyip Erdogan steps off his plane as he arrives in Elazig for an election rally of his ruling Justice and Development Party (AKP), March 6, 2014. - REUTERS/Umit Bektas

On March 12, thousands of Turkish citizens poured into the streets of Istanbul to take part in the funeral of Berkin Elvan. The 15-year-old boy with huge dark eyes and an impish smile has emerged as a symbol of protest against the tightening grip of Turkish Prime Minister Recep Tayyip Erdogan. Across the nation, thousands more are chanting “Killer Erdogan,” and braving water cannons and clouds of pepper spray to march in solidarity.

Berkin died a day earlier, on March 11, after lying in a coma for 269 days. On June 16, 2013, at the height of the Gezi Park protests, riot police fired a gas canister, hitting Berkin on the head. Berkin had gone out to buy bread for his working-class family. “Mama, don’t go. I will. You might get hurt,” he had said.

When he was admitted to the hospital, Berkin weighed 45 kilograms (99 pounds). By the time he died he was down to 16 kilograms (35 pounds). “God did not take my son, Tayyip [Erdogan] did,” cried Gulsum, the stricken mother, upon learning of her only son’s death.

How did Erdogan respond? Nobody knows.

The prime minister has not uttered a word, neither of contrition nor condolence. He has remained silent in the face of the death of an innocent teenager, just as he did when six other youths died as a result of police violence during the Gezi protests.

One can only speculate.

Could it be because all of the victims, save one — a Sunni Kurd — were members of the Alevi minority sect? Numbering some 20 million, Turkey’s Alevis practice a liberal form of Shiite Islam. (They neither fast during Ramadan nor pray in mosques, and have faced centuries of persecution at the hands of Sunni purists.) The question may sound harsh — Erdogan and his followers would call it a “provocation” — but it is relevant because Erdogan has unabashedly and repeatedly fanned the flames of anti-Alevism to boost his ratings. During the 2011 parliamentary election campaign, he egged on crowds to boo his main pro-secular rival Kemal Kilicdaroglu for being an Alevi. And, turning a deaf ear to Alevi fury, he has named a planned third bridge over the Bosporus after Ottoman Sultan Selim I, who oversaw the mass slaughter of Alevis.

A more likely explanation is that to acknowledge Berkin Elvan’s death would be to acknowledge responsibility for it. But, as I sit here writing with one eye on live TV coverage of Berkin’s funeral, a far more horrible thought strikes me. Could it be that Erdogan simply doesn’t care?

I say “horrible” because until recently I was convinced that for all his flaws Erdogan was a kind-hearted man, a man who melted in the presence of children, who felt the pain of others. In a column for Haberturk (the Turkish newspaper that fired me a year ago under pressure from Erdogan), I went as far as to claim that if I happened to cry in his presence he would lean over and ask, “What’s the matter Amberin Zaman?” I even pictured him affectionately patting my back. Now I realize just how deluded I was. Erdogan is heartless, or has become so.

Ask the families of the 34 Kurds (most in their teens) who, on Dec. 26, 2011, were bombed by Turkish air force jets on the Iraqi border on the baseless assumption that there were Kurdistan Workers Party (PKK) rebels concealed in their midst. Erdogan never offered an apology for the massacre in Uludere (or Roboski in Kurdish). Even worse, he oversaw a cover up. Not a single head has rolled. When Felek Encu, the mother of 13-year-old Erkan, the youngest of the Roboski victims, confronted Erdogan at a the inauguration of an airport in the neighboring city of Cizre in July, “he showed no sympathy,” said Veli Encu, who lost a brother in the attack. Felek had brought along her newborn son whom she named after his slain brother. “We thought Erdogan really loved children. We’d seen him posing with babies, but he paid little Erkan zero attention,” Encu told me. “What a letdown.”

What a letdown, indeed. Like millions of Turkish citizens, I voted for Erdogan and the Justice and Development Party (AKP) — twice.

I did so because I believed Erdogan was moving our country away from decades of army tutelage, making it a freer, happier and more prosperous place — one where overtly pious and secular Alevi and Sunni Muslims could coexist, where long-repressed Kurds and Christians would be treated as equals and where I would no longer be scorned for being “not really Turkish” because my father was from Bangladesh. This assessment was based on the first term of the AKP's rule between 2002 and 2007. It was apparently shared by the European Union, which opened membership talks with Turkey in 2005.

Coming on the heels of the Sept. 11 attacks, Erdogan’s success gave me hope. As a Muslim woman I felt pride at being led by a man and a party who was deconstructing the tired canard that Islam and democracy cannot coexist. When my pro-secular friends fretted about Erdogan’s Islamist roots, I would retort, “What is wrong with mixing religion with politics if it gives our leaders a moral compass.”

Some moral compass. Erdogan and his inner circle are implicated in the biggest corruption scandal in modern Turkish history. He insists that allegations against him are part of a global conspiracy aimed at overthrowing the AKP and weakening Turkey. It’s the same line Erdogan used for the Gezi protests, and many of his supporters seem to believe it.

But for how long?

Berkin Elvan would surely have demanded to know.