Amberin Zaman writes that the December 2011 killing of Kurdish smugglers from Uludere by Turkish warplanes remains a test for the Turkish government. 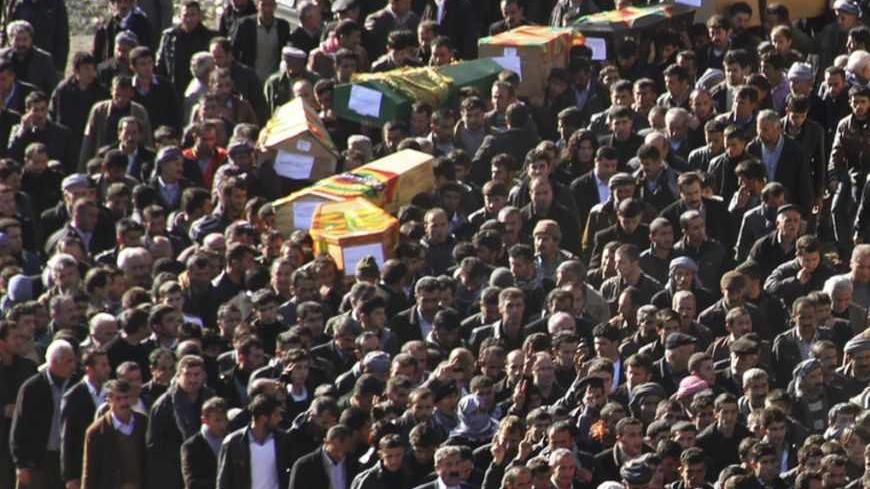 Coffins of victims killed in airstrikes are carried by villagers during a funeral ceremony in Gulyazi near the southeastern Turkish town of Uludere, in Sirnak province, Dec. 30, 2011. - REUTERS

On Dec. 28, 2011, Turkish warplanes rained bombs on a group of Kurdish smugglers as they were preparing to cross into Turkey from Kurdish-controlled northern Iraq. Some 34 men were killed along with dozens of pack mules. Most of the victims were teenagers. The youngest was 12.  Many were from the same extended family. And all came from a pair of remote border villages in the township of Uludere.

The Uludere massacre remains a major a test of the ruling Justice and Development Party’s (AKP) commitment to democratic reform and, in particular, to cementing civilian control over the army.

Even as AKP pursues its most ambitious effort ever to solve the long-running Kurdish problem through negotiations with the imprisoned PKK leader Abdullah Ocalan, it has yet to offer an apology (let alone justice) for the victims of Uludere.

On March 27, a parliamentary commission tasked with investigating the affair approved a draft report of its findings. It was rammed through with AKP member votes. Couched in determinedly vague language, the report claimed that the massacre was unintentional and put it down to “communication flaws” between civilian and military authorities. The decision to bomb the smugglers, whose activities were well known to local security officials, came after surveillance drones spotted their caravan. Intelligence reports determined that there were PKK rebels, including a top commander, in their midst. The army wasn’t taking any chances and pushed the button. The report avoids naming those who were responsible for the decision. Not a single head has rolled.

“The report was a whitewash,” charged Levent Gok, of the main opposition pro-secular Republican People’s Party (CHP), who vetoed it together with fellow opposition lawmakers on the commission. “Who assessed the drone [surveillance] images? Who determined the targets? Who gave the orders to bomb?” he asked in an interview with the pro-secular Cumhuriyet daily. “We sought to find the answers to all these questions but saw that the AKP [commission] members were inclined to a cover-up.”

The government’s determination to bury the affair flies in the face of the Turkish Prime Minister Recep Tayyip Erdogan’s claims that he has introduced “advanced democracy” to Turkey. It also offers a striking example of how AKP cherishes its erstwhile foes in the army (hundreds of officers are in jail on coup-plotting charges against the government) as loyal allies. The shift was openly on display when, soon after the massacre, Erdogan heaped praise on the army chief Necdet Ozel, as if to absolve him of any responsibility.

Pro-government commentators suggest that remnants of the so-called “deep state” within the security force were behind the killings. But as Ferhat Encu, a spokesperson for the Uludere victims, who lost a brother and three cousins, asks, “If the government can punish coup plotters in the army, why can’t it uncover those who were responsible for the death of my loved ones?”

Pity the journalist who makes a similar case. Uludere and Turkey’s support for Syrian rebels fighting to overthrow the Assad regime have become taboo subjects in the country’s increasingly repressive media environment. So much so that journalists who offer critical views can be fired by media bosses fearful of endangering their other business interests by incurring the government’s wrath.

Until recently, Turkey’s largest pro-Kurdish party, the Peace and Democracy Party (BDP), which is openly sympathetic to the PKK used Uludere to attack the government. BDP officials may have even played a part in the families’ decision to refuse compensation and jobs offered by the government. It therefore came as a big surprise when Murat Karayilan, a top PKK commander in the field, claimed last week that America had a hand in the affair. A Wall Street Journal article published on May 16, 2012 quoted Pentagon officials saying that American drones did indeed spot the smugglers and offered more surveillance to identify the convoy. But “Turkish officers instead directed the Americans who were remotely piloting the drone to fly it somewhere else.” Why then would Karayilan spout such improbable claims?

According to Henri Barkey, a professor of international relations at Lehigh University in Pennsylvania (and a contributor to Al-Monitor)  “By blaming the US, Karayilan thinks he is providing cover to Erdogan and the AKP by trying to show the skeptical Turks (nationalist and other groups) that the peace process is not an American plan being implemented by Turkey.”

The families of the Uludere victims feel they are being manipulated. “I don’t believe the Americans were involved,” says Encu. “It makes no sense.”

Meanwhile, analysts sympathetic to Fethullah Gulen, the moderate Islamic preacher who commands a sprawling global empire of schools and media outlets, from his self-imposed exile in rural Pennsylvania, have been blaming Turkey’s national intelligence, known by its initials MIT for the flawed intelligence that led to the Uludere bombing. The so-called Gulenists made common cause with the AKP in its early days, particularly in its battle to defang the army. But they have fallen increasingly at odds with Erdogan, who is said to be unsettled by their clout in the judiciary and the police force. And never more so when an allegedly pro-Gulenist prosecutor summoned the MIT chief, Hakan Fidan, last year for questioning in a case against the PKK amid claims that some of his men may have joined its ranks. The spy agency is said to remain immune to Gulen’s influence.

Tensions between Erdogan and the Gulenists are set to sharpen in the run up to the 2014 presidential elections. Erdogan wants to become Turkey’s first popularly elected president and cynics charge that his overture to the Kurds is part of a plan to secure their support for constitutional changes that would boost the powers of the presidency. It’s impossible to prove. The agreement allegedly struck between Ocalan and the government remains shrouded in secrecy. What is clear is that the campaign to serve justice to the victims Uludere is beginning to fade. Their families await an apology that may never come.

Amberin Zaman is an Istanbul-based writer who has covered Turkey for The Washington Post, Los Angeles Times, The Daily Telegraph and The Voice of America. A frequent commentator on Turkish TV, she has been the Turkey correspondent for The Economist since 1999. She is a regular contributor to the German Marshall Fund of the United States' On Turkey series. She has also written columns for major Turkish newspapers. Her areas of specialization  include Turkish foreign policy, the Kurds, and Turkish-Armenian reconciliation. You can follow her on @amberinzaman