Mules belonging to villagers living in the sensitive Uludere area have been shot by the Turkish military in its fight against what the state defines as smuggling and the locals see as legitimate trade over the Iraqi border. 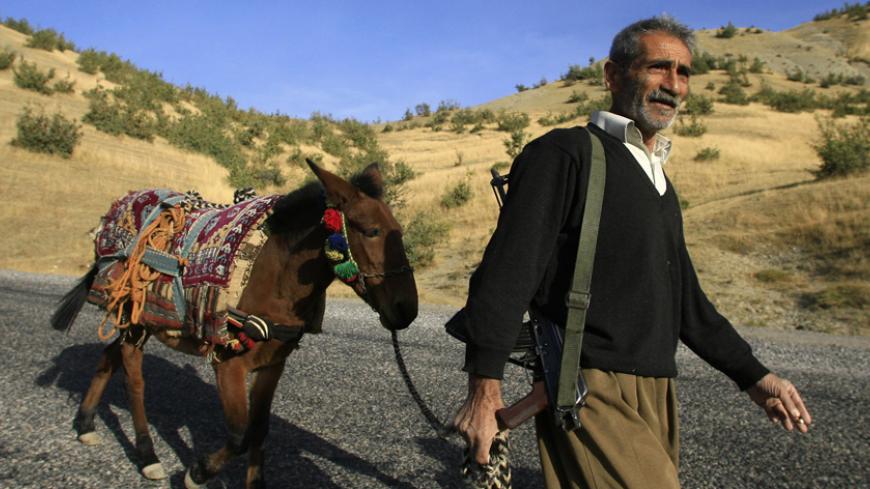 Mules are known for their tenacity and stamina. Now they have also become "accessories to crime" targeted by the Turkish army. For hundreds of years for the people living in the Turkey-Iraq border’s hard climate and rough terrain, mules have been the primary mode of moving cargo on the ancient trade routes. With the demarcation of the Turkey-Iraq border in 1926, this traditional cross-border trade was re-branded as cross-border smuggling and the mules were made accessories to the crime of smuggling.

Decadeslong socio-economic dynamics clashed with political dynamics recently in disturbing events on the Turkey-Iraq border. Kurdish-origin villagers living there said that near the village of Ortasu, not far from Uludere (also known as Roboski), Turkish soldiers killed eight mules with rifle fire March 23. At Uludere and nearby villages, people demonstrated for three days, but soldiers, armed with a court order, continued to shoot the mules. We must remember here that Uludere is a sensitive area where on Dec. 28, 2011, the Turkish air force mistakenly bombed and killed 34 smugglers misidentified as militants with the Kurdistan Workers Party (PKK).

According to security sources who serve in the region and who spoke to Al-Monitor on condition of anonymity, since the end of February there has been significant growth in smuggling on the Turkey-Iraq border. These sources emphasize that smuggling is no longer an individual activity. It has become massive and organized, using mule trains of 200 to 300. To keep psychological pressure on security forces serving the area, the PKK makes good use of smuggling operations and constantly provokes villagers against soldiers. The same sources said that since the 2011 Uludere bombing, people living along the border have perceived smuggling as their prerogative. Each household maintains eight to 10 mules. Cigarette smuggling is the most lucrative, with at least one Turkish lira ($0.35) profit per package. As a mule can carry up to 3,000 cigarette packs in one run, each can earn at least 3,000 lira ($1,100) for its owner. With 10 mules, a smuggler can make up to 30,000 lira ($11,000). There are also allegations that guns are sometimes smuggled to terrorists strapped under bellies of mules.

The Turkish security sources point to visibly improved living conditions of the villagers along the border as evidence of their allegations. They said that in front of every village tenement there are two or three cars, at least one a luxury model. According to the sources, mules have been shot when clashes broke out after smugglers reacted to the soldiers' order to halt by opening fire. Soldiers also report that on April 9, about 1,000 villagers provoked by PKK militants marched to the border. Despite warnings that they were entering a restricted military zone, they did not disperse and 15 soldiers were wounded by the stones they threw.

According to Ferhat Encu, a pro-Kurdish People's Democracy Party (HDP) candidate in the approaching parliamentary elections who lost relatives in the 2011 air attack, what the state defines as smuggling is actually legitimate trade rooted in cultural and economic relations with relatives living on the Iraqi side of the border. Oncu insists the villagers of the Uludere region are not making the big money the authorities claim. He explained, "This is a 30-kilometer [18½-mile] route over mountainous terrain. This perilous activity that takes two to three days will at most offer a maximum profit of 200 lira [$80] per mule.” He adds, “For the past 30 days, security forces have been systemically punishing villagers of the sensitive Uludere area by executing their mules.” Encu said that when smugglers were apprehended in the past, only their cargo was confiscated. But now, the villagers involved are penalized by the loss of their mules, each worth 8,000 to 10,000 lira ($3,100 to $3,900).

Encu links the unmerciful hard line of the security forces over the past month to the coming elections and explains there is a major provocation effort to pit the soldiers against villagers. He warns that the death of a single villager in this tense atmosphere could have serious consequences, saying, "Roboski cannot accept one more death. The authorities have to understand this reality.”

HDP Deputy Chairman Aydan Bilgen told Al-Monitor the issue is not only about mules. “Borders have become an obstruction to peoples’ interests,” he said, adding that the way out is to find ways and develop mechanisms that will allow cooperation between neighbors for cultural, demographic and commercial interaction.

The solution is simple. The state can legalize this trade, now classified as cross-border smuggling. Local people always point to the existence of a legal crossing point at Habur, which is about 300 kilometers (186 miles) away in often adverse weather and over rough terrain. The solution, therefore, is to open new border crossings for this area. There are rumors that the state intends to open two crossings at Ortakoy and Aktepe, but the decision-makers in Ankara appear unconcerned with this vital issue. Another proposal comes from Encu, who said the state can easily put up mobile border crossings for controlled access. Customs officials and security officials posted there can then regulate the cross-border trade and collect taxes. He said, “If the state wants it, this can be done in one day.” Asked by Al-Monitor whether the people of the area will accept a controlled-access model and pay taxes, he said adamantly: "Everyone living in this area is a citizen of this country. We have no aspirations to secede. People are poor here, all struggling to make a living. Everyone will agree to pay their taxes and live with restrictions instead of risking their lives. And if there are any who don’t agree, we will take them to task before the state.”

According to a retired military officer who has served in border units and become an expert on smuggling, the people running mules are laborers who make little money. The real profit-makers are the middlemen. He told Al-Monitor on condition of anonymity, “A package of smuggled cigarettes is 1.5 lira at Uludere ($0.55) and 3 lira ($1.2) in Istanbul. Who do you think is profiting from the difference?” He said the state, instead of killing mules one by one in the field, has to go after organized distribution networks in the country to apprehend the big fish.

He said, "Border operations require a bit of diplomatic soldiering,” adding that no matter what the soldiers do, they won’t be able to stop smuggling. To the contrary, the tougher the soldiers are, the worse their relations with the people of the area will be. This is an issue that cannot be handled by playing cat-and-mouse on the ground. Instead of going after individual smugglers, the state must target the smuggling barons at the top. He warned, “The state should not tamper with the bread of the people living here. In these parts, people die for two causes: The first is honor and the second is his bread."

Clearly the state is committing two major mistakes. One is to target the small fry who do the leg work instead of going after the smuggling barons who control distribution all over Turkey, and the second is killing mules. A soldier’s mission should not be to combat smuggling and kill animals. So how can the state and smugglers reconcile? By legalizing cross-border trade and giving some thought to Encu’s proposal for mobile border crossings.

Of course, there is also the problem of hawkish military commanders in the area who subscribe solely to hard-line methods. According to a security expert who spoke to Al-Monitor, “These commanders either have not grasped the changing dynamics of the conflict in the southeast or they have ill intentions.” He said that focusing soldiers on an issue that is not the true mission of the army will not only batter the public reputation of the military but also allows those truly responsible, like the Ministries of Interior, Customs and Agriculture, to do nothing. Sadly, when the smuggling issue becomes militarized, the losers will be both the poor mules targeted for execution and the standing of the Turkish army that kills them.