Prime Minister Recep Tayyip Erdogan defined Berkin Elvan, the 15-year-old boy who fought for his life for nine months after being hit with a tear gas canister, a terrorist. 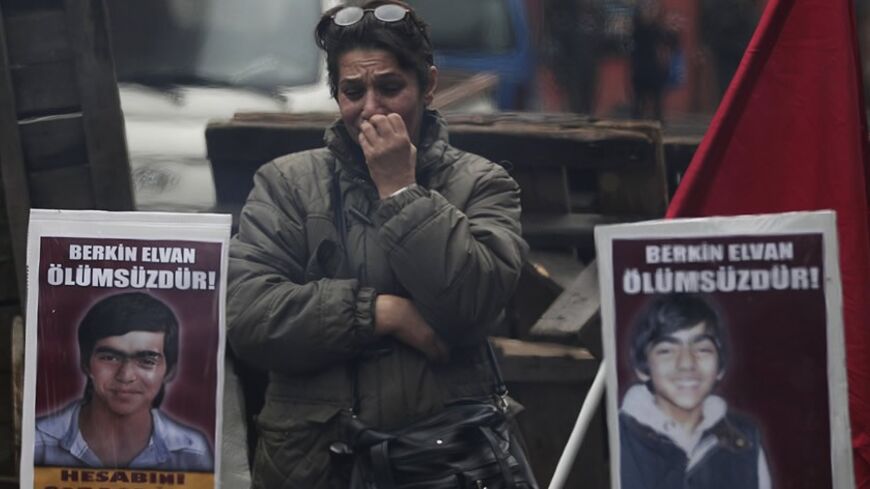 On the day Turkish Prime Minister Recep Tayyip Erdogan marked his 12th anniversary in office as the longest-serving prime minister — on March 14 in his Gaziantep rally ahead of the local elections due in about two weeks — he asked people to continue supporting him for the ongoing negotiations with the imprisoned Kurdistan Workers Party (PKK) leader Abdullah Ocalan, who is considered responsible for about 40,000 deaths in the country’s fight against the Kurdish separatists. But unexpectedly, Erdogan made the huge crowd before him boo the mourning family of Berkin Elvan, who died at age 15 two days before, after having been in a coma for nine months as a result of police shooting a tear gas canister into his head. Erdogan defined Elvan as a terrorist and praised Burakcan Karamanoglu, 22, who died on the night of Elvan’s funeral, as a martyr. This sounds like Erdogan is consciously seeking chaos in the country.

"This kid with steel marbles in his pockets, with a slingshot in his hand, his face covered with a scarf, and who had been drawn in by terror organizations, was unfortunately subjected to pepper spray,” Erdogan told the crowd. “How could the police determine how old the person was whose face was covered with a scarf, and who was hurling steel marbles with the slingshot in his hand?" he questioned.

Though there is an ongoing judicial investigation into Elvan’s death, the authorities insist they have no public surveillance recording showing this incident. The police have yet to claim responsibility. Ironically enough, Erdogan claimed that a headscarved woman carrying her 6-month-old baby daughter in a stroller at the Kabatas ferry landing in Istanbul on June 1, 2013, was attacked by Gezi Park protesters whom he defined as disrespectful to pious Muslims at the least. Kanal D, a privately owned television channel, however, broadcast on Feb. 13 footage of the city surveillance cameras clearly showing that the woman was not touched at all, and that she had not experienced anything threatening. Erdogan still insists she was attacked, no matter what the city surveillance cameras showed.

The prime minister’s facts are shadowy. Erdogan disregards the death of a 15-year-old boy whose link to terror is under dispute. Even if he had been a terrorist, does the state do justice by killing him? Plus, while Erdogan is trying to show that Elvan’s death is of no value, how could he ask people to forgive the PKK terrorists and accept them as their neighbors and live in harmony and peace?

“His mother says, 'My son’s killer is the prime minister,'” Erdogan said, making the huge crowd loudly boo Gulsum Elvan, Berkin’s mourning mother. “I know love, fondness for one’s child, but I cannot understand why you threw steel marbles onto your son’s grave,” he continued. When Elvan was taken to the hospital on June 16, police found shooting marbles in his pocket and registered it as proof of his being a member of a terrorist organization. Sami Elvan, his father, put those marbles onto his son’s grave as a symbol of him playing shooting marbles with friends on the streets as a child. As if the damage he had brought about was not enough, Erdogan contrasted Elvan’s death with that of Karamanoglu. “Our son Burakcan was martyred just three months after coming back from his military service. Burakcan was not carrying a slingshot or a gun,” Erdogan said.

“Well, if the prime minister likes to really understand what is taking place on the ground,” Sevim — Elvan’s neighbor in Okmeydani, Istanbul, who asked to be referred to by her first name only — told Al-Monitor, “Burakcan was not killed in his neighborhood, but Berkin was. Why? Because Burakcan was among those provocateurs who were worked up by the ruling party’s Istanbul branch head, and who came to our neighborhood on the night of the funeral to bully us by swearing at Berkin’s mother.” She continued, “When our men — young and old — saw this crowd, they went onto the streets to defend our houses. This is an Alevi neighborhood, and there is a sharp divide with the Sunni neighborhood. We know what we heard that night, and we have a right to be afraid of our lives. But it is Erdogan’s narrative that is allowing these fanatics to come to this neighborhood to create trouble, and the police aren’t there to protect us. We are scared of both sides.”

Sevim also challenged Erdogan’s notion that Elvan’s neighborhood is dominated by the leftist terrorist organization Revolutionary People's Liberation Party-Front (DHKP-C). “Look, there are people who are sympathizers of this terrorist organization but it is wrong to consider all of us as its members. Also, I read their press release. They haven’t claimed responsibility for Burakcan’s death as Erdogan charges.” Sevim told Al-Monitor by stating that on the night of Erdogan’s speech in Gaziantep, police aimed directly at the cemevi, the Alevi’s sacred prayer house, and brought it under heavy tear gas bombardment. “There were kids inside for their music classes. Mothers, fathers, grandmothers and grandfathers all rushed to the cemevi to bring their kids to safety. One grandfather had a severe nose bleed as his blood pressure rose because of the tear gas, and the ambulance did not come to help us. His family took him to the hospital after waiting for 40 minutes. This is the situation here. There is tension here on the street.”

Despite Erdogan’s attempt to divide the funerals on moral grounds, both mourning fathers called for calm. His eyes all red from crying after burying his son Burakcan on March 14, Halil Karamanoglu extended condolences to the Elvan family, stating that “Berkin is our son, too.” Sami Elvan, Berkin’s father, immediately picked up the phone after hearing this to call Burakcan’s father to personally express how sorry he is for the loss of their two boys. The nation was only humbled before these two fathers. The Turkish Medical Association released an unusual press statement on March 15 with the headline, “We’re concerned about the prime minister’s emotional state."

“We are carefully observing Prime Minister Recep Tayyip Erdogan’s dividing, marginalizing, polarizing narrative since the Gezi [Park] resistance. We were horrified yesterday when listening to his [Erdogan's] remarks about Berkin Elvan at the Gaziantep rally,” the statement read. “Normally, no one attempts to hurt two families who are mourning their children’s loss by taking sides. Normally, no one declares a 15-year-old boy, who was in a coma for 269 days after being shot in the head by the police on his way to buy a loaf of bread, a terrorist. Normally, no one confuses shooting marbles with “steel marbles,” which were laid on the boy’s grave. Normally, no one makes people at a rally boo a mother who has just lost her child two days before.” The statement added, “We are doctors. We know about people’s various states of mind and multiple emotional phases. We feel concerned about Prime Minister Erdogan’s emotional state. We are truly worried about it, for him, for his close circles and our country. We are sharing this concern with the public.”

The opposition party leaders echo the same sentiment. Kemal Kilicdaroglu, the leader of the main opposition Republican People’s Party (CHP), paid a visit to Berkin Elvan’s family on March 15 to extend his condolences and asked for calm from everyone and not to be provoked, which could lead to new deaths. Devlet Bahceli, the leader of the Nationalist Action Party (MHP), agreed, “The prime minister is trying to escape the corruption allegations, and in doing so he is poisoning this nation at any cost.”