Is Erdogan’s sectarian brinkmanship a political ploy or recipe for disaster? 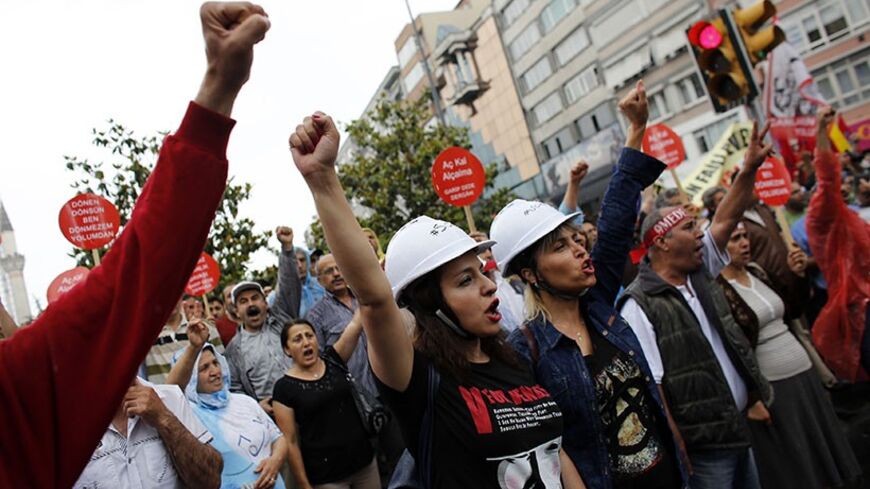 Alevi demonstrators shout antigovernment slogans during a protest against the latest violence in Okmeydani, a working-class district in the center of Istanbul, May 25, 2014. - REUTERS/Murad Sezer

The Sunni-Alevi rift, one of the multiple fault lines of Turkey, is simmering thanks to the increasingly sectarian discourse and politics of Prime Minister Recep Tayyip Erdogan. For decades, the Kurdish question used to be the most volatile issue in the Turkish political and societal agenda. But, for over a year a “peace process,” although imperfect and uncertain in how it will evolve, where it will lead and how it will end, has provided relative peace. There have been no coffins of “martyrs,” as the fallen security personnel are defined by state officials, or of the Kurdish fighters as named by their organization, the notorious Kurdistan Workers Party (PKK). The “peace process,” which bears the imprint of Erdogan more than anybody else, has evoked tremendous optimism for the country toward overcoming its seemingly most intractable problem.

Now, particularly after the Gezi Park events of last summer, the sectarian chasm is replacing the ethnic one that pitted the security forces of Turkey against the Kurdish insurgency led by the PKK. By what may have been an extremely bizarre coincidence, all those who lost their lives during the Gezi protests and their aftermath were Alevis, some of them children.

This fueled centuries-old misgivings in Turkey's huge Alevi community, which constitutes roughly one-fifth of the population of nearly 80 million.

This schism, which has the potential of deep social and political fissures and goes back to glory days of Ottomans in the 16th century, was re-triggered and accelerated by recent events. What Erdogan did was to pour oil on the fire.

It is not only because of his unrelenting and uncompromising stand against the Syrian regime, whose main constituency is Alevi (in English, there is an arbitrary distinction to call the Syrian co-religionists Alawites and the Turkish ones Alevis; for both, the distinction has no legitimate grounds), or that he has provided semi-covert support to jihadist Sunni forces ranging from Salafists to al-Qaeda to topple the Damascus regime. It is also because his persistence in using language that is guaranteed to offend the Alevis in his discourse in Turkey.

Last year, about two weeks before the Gezi Park protests erupted, a car-bomb explosion in the town of Reyhanli abutting the Syria border killed 52 people on May 11, 2013. Turkish officials attributed responsibility to Syrian intelligence and a secret Turkish Alevi organization that was alleged to be cooperating with it. But even more important was the unprecedented manner in which Erdogan, or any other politician for that matter, spoke of the fatalities of Reyhanli as “our Sunni citizens.”

That language gave the impression to Alevis that the Erdogan government they perceive as Sunni-Islamist and even fundamentalist was blatantly prejudiced. This sentiment peaked tragically after the funeral of Berkin Elvan, a 13-year-old Alevi boy who died on March 11, when Erdogan resorted to accusatory language. That funeral was the biggest seen in Istanbul’s recent history, by the way.

Erdogan’s dispassionate attitude toward Elvan’s death generated reactions because people remembered his shedding tears on TV screens for the killing of a young Muslim Brotherhood girl in demonstrations in Egypt. The day after Elvan’s funeral, in an election campaign speech, Erdogan hinted at the Alevi identity of Elvan’s family, used critical language against them and had Elvan’s mother booed by thousands of his partisans.

Okmeydani, a district close to Istanbul’s center at Taksim where Elvan lived, has long been a hotbed of Alevi militancy. On May 22, in an observance in memory of Elvan, police again opened fire and a bullet killed a 30-year-old worker who had nothing to do with the events and who had come to the Alevi center at Okmeydani for a funeral. The death of Ugur Kurt, father of a 2-year-old child, led new disturbances at Okmeydani resulting in the death of another person.

Alevis were further outraged with the inconceivable language Erdogan used referring to Elvan, “What? Must there be an observance everyone killed? He is dead. It is done with.”

This attitude was protested on May 25 in many cities of the country, notably in Istanbul, Ankara and Izmir, in demonstrations organized by seven major Alevi organizations of Turkey including the Confederation of European Alevi Unions. Their joint slogan was “Alevis are coming out to the streets: Enough of Injustice and Unfairness.”

Alevi reactions spilled beyond the borders of Turkey. The election rally Erdogan staged in the German city of Cologne, to ask for votes from Turkish citizens who will be voting as expatriates for the first time in coming elections, became an occasion that reflected the political and sectarian divide of Turkey.

Erdogan staged a true show of force at one of Europe’s largest indoor halls, Lanxess Arena of Cologne, in front of his fawning supporters, some of them in white shrouds to signify that they are ready to die for him.

But as Reuters reported, “Earlier in Cologne, some 45,000 protesters had marched against the Turkish prime minister, according to authorities’ estimates, … some wearing miners’ helmets and with banners calling Erdogan a dictator, laying bare Turkey’s political divisions in the western German city.”

The vast majority of anti-Erdogan protesters, who came from all corners of Germany and marched in the streets of Cologne, were Alevis. The calls for anti-Erdogan protests were issued a few days before by the Confederation of European Alevi Unions. The deaths in Istanbul’s Okmeydani came after this call for protests, further deepening the already tense Sunni-Alevi schism.

There are those who think that Erdogan may have benefited from this tension. They calculate that the prime minister who has proven that he is Turkey’s best political operator by winning eight successive elections and who doesn’t expect any Alevi votes in the August presidential elections may well consolidate and enhance his Sunni constituency by exploiting this chasm with the Alevis. According to Internet sites supporting Erdogan, he is expected to get 53% of the votes in the first round of presidential elections. This is interpreted as an indication that Erdogan has not suffered from the Sunni-Alevi gap, and that he has instead benefited from it.

Leaders of several Alevi organizations share these views and fear that the Alevi community might be dragged into provocations.

Izzettin Dogan, one of Turkey’s leading Alevi opinion-makers, said this plot could be to divide society in two and use the Sunnis as a stepping stone to presidency. Ali Kenanoglu, leader of another influential Alevi organization, said, “There is non-hostility in the Kurdish issue. Now they are trying to terrorize Alevis. The government is intentionally provoking the Alevi community.”

Kemal Kilicdaroglu, the leader of the main opposition Republican People's Party (CHP), is an Alevi. This advances Erdogan’s policy of achieving political success by consolidating his own constituency through the use of sectarian cleavage.

For Erdogan, to enhance his political power and survive is particularly essential as a robust response to the outside world that he believes is conspiring to unseat him.

Thus, sectarian politics has a rationale in Erdogan’s modus operandi. Is it a wise policy of brinkmanship on his part or a recipe for national disaster?