Despite the high hopes of the opposition, Turkish Prime Minister Recep Tayyip Erdogan is likely to survive the Soma disaster without any significant political loss. 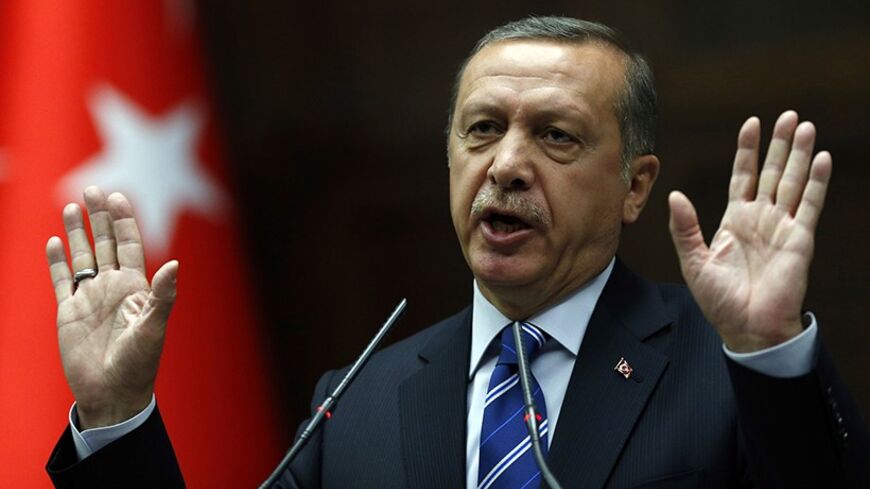 Prime Minister Recep Tayyip Erdogan addresses members of parliament from his ruling Justice and Development Party (AKP) during a meeting at the Turkish parliament in Ankara, April 29, 2014.

A prominent columnist from the Radikal daily, Murat Yetkin, penned a searing column titled “Soma is neither Gezi nor the graft probe, you know that, right?” Yetkin explained that the Soma mine disaster touched a different nerve in society and could not be blamed on a lobby. Several opposition pundits joined Yetkin to argue that the Soma disaster could easily escalate to bring the “end of Turkish Prime Minister Recep Tayyip Erdogan,” that is, if his administration could be held accountable. One supporting argument opposition was that the Soma disaster harmed Erdogan’s public image so much that he had to delay the much-anticipated announcement about his presidential bid.

In response to the mounting criticism, dedicated Justice and Development Party (AKP) supporters first engaged in a social lynching campaign. Instantly, multiple domestic and international publications that put the government on the spot were delegitimized and quite a few journalists were targeted and labeled as “Erdogan-haters.”

This term “Erdogan-haters” is used to explain the concept “anti-Erdoganism.” Intriguingly, pro-AKP pundits managed to turn the tables around on even “anti-Erdoganism” hype. The argument in a nutshell — as mind-boggling as it sounds — goes like this: Anytime there is a sound criticism of Erdogan or an outburst that could easily turn into a popular slogan (Der Spiegel’s “Go to Hell, Erdogan” headline fits into this category) the criticism is not refuted. Rather, the simple verbal criticism gets reframed as “aggressive hate speech” and the critical pundit faces a reply as such: “You are anti-Erdogan; you hate Erdogan so much so that it blinds your judgment. Hence, all your arguments are worthless.”

You could follow this pattern in unison on political talk shows, social and print media from pro-AKP sources. It is a cul-de-sac, which halts any sort of communication, by saying “We cannot talk because you are an Erdogan-hater. Erdogan can do no good in your book. Until your hate is over, there can be no discussion.” Most of “the hate” pro-AKP pundits complain about is not about Erdogan as a person, but rather about his policies. However, along with avoiding any rational engagement about policy failures, AKP pundits utilize this accusation of “anti-Erdoganism” for damage control. As controversial as it may be, it works.

My observation is that at least in the short run, the AKP will come out of the Soma disaster without paying any significant domestic costs. Therefore, to answer Yetkin: Soma is just like the graft probe and Gezi after all. Allow me to explain some of the causes, and the implications. There are at least three reasons why charging all criticism as “anti-Erdoganism” works to manage damage control for the AKP.

First, anti-Erdoganism allegations unite the core of AKP supporters. This base is ready to rally around the Erdogan cult when and if they perceive an attack on him. Hence, if a journalist or a pundit is labeled as an “Erdogan-hater,” any of their claims could be easily discredited. Since Gezi, pro-AKP media has meticulously worked on centering all criticism as a personal attack against Erdogan.

Erdogan has consistently made sure to never sacrifice any of his team members who might be the target of the allegations. Following a strong “don't tread on me” motto, no one in Erdogan's inner circle has been penalized or socially ostracized for the alleged or proven charges. The latest example is the aide who was caught on camera kicking a miner in Soma. Not one high-level AKP official publicly condemned the behavior or called for him to be fired. Indeed, some bureaucrats who receive harsh criticism from the opposition are promoted generously. A recent example was on May 22, when Avni Mutlu, Istanbul’s governor, who was seen responsible for the Gezi Park atrocities, became chief of the National Police Department. The image AKP presents is that Erdogan and his inner circle is the target and they shall be protected at all costs.

Second is the rule of unconditional solidarity. There is no negative feedback — I do not dare utter the word criticism here — about Erdogan’s most abhorrent rhetoric or behavior from within pro-AKP circles. For example, on May 22, Erdogan spoke at the 70th General Assembly of TOBB (the Union of Chambers and Commodity Exchanges of Turkey) in the presence of several businessmen and the main opposition leader, Kemal Kilicdaroglu of the Republican People’s Party (CHP). Erdogan kept referring to Soma as an “accident,” then boldly addressed Kilicdaroglu and said, “If I were a dictator, you could not be going from one rally to another.” Immediately, following Erdogan’s speech, pro-AKP pundits condemned all those who call Erdogan a dictator, and glorified his behavior.

In the meantime, not one single member of the AKP bureaucracy has resigned following the Soma disaster. Opposition parties asked for a parliamentary inquiry for two ministers. The inquiry was rejected by a majority of AKP’s votes. While opposition argued that anywhere in the world a government official would accept responsibility and resign, AKP skillfully convinced its base that the mining company was the real culprit in this “accident” and Erdogan has been turned into a target by “Erdogan-haters.” In the words of a prominent pundit, Abdulkadir Selvi, “This is no longer about the 301 victims of Soma, but a strong hate speech against Erdogan. Why is there such hate speech against Erdogan? Because Erdogan represents the 'nation,' and they hate this nation.” Selvi's dedication is noteworthy: We can see Erdogan takes care of “his men” and they keep following his command.

Third, rebels are marginal. That is, all major anti-government protests about the Soma disaster have been erupting in “troubled” areas, that is towns with majority Alevi and Kurdish populations and some university campuses that are easily labeled as “marginal” for AKP’s core. A scholar from Koc University, Harun Ercan, explained to Al-Monitor why this is the case: “There were about 10,000 people gathered in Taksim [Square] for solidarity with Soma families and workers; police dispersed them in 15 minutes. Police in Taksim were better organized than the protesters. However, look at districts with Alevi majority populations and Kurdish towns, you see people who will not run away. These Kurdish or Alevi groups are more resilient and accustomed to police brutality and they stand their ground. This is why resistance in these areas lingers.” Ercan said that even at the ITU (Istanbul Technical University) campus, at the faculty of mining engineering, occupation Kurdish students and politicians were most active. It was particularly poignant that within 24 hours of my conversation with Ercan, a death was reported from Okmeydani cemevi (Alevi prayer house). Okmeydani is an Alevi majority district where Berkin Elvan, 15, was shot and fell into a fatal coma during the Gezi Park protests. The victim of May 22 was shot allegedly by riot police while he was waiting for a funeral service at the garden of the cemevi.

Since the Soma disaster, political talk shows on pro-AKP television channels debate “what kind of coup they wanted to accomplish with 301 deaths in Soma.” Perplexing as it is, credit must be given to AKP’s media and image masters for successfully reframing this horrendous event as a potential coup threat to Erdogan. In the short run, the heavy focus on “anti-Erdoganism” pays off for Erdogan and the AKP. Quite similarly to the Gezi protests and the Dec. 17 graft probe, Erdogan suffers for a few days until adjusting his stand with his core supporters. After the initial stage, the AKP manages to turn the tables and situate itself as the victim of a larger attack. It resembles the ancient military tactic, called “Wolf’s Trap or Crescent Technique” of pulling back to entice the enemy forces in, only to encircle them into defeat.

My observations indicate that magical pattern will prove successful for Soma as well. In the short run, Erdogan survives a tragic policy failure. Given there are less than three months to the presidential elections, short-term successes are all that Erdogan needs. Hence, unless the opposition can explain the AKP administration’s policy failures and their consequences to the public clearly, the anti-Erdoganism hype will produce real benefits to the ruling elite.