Istanbul might think twice about celebrating both "Conquest Day" and democracy in Turkey. 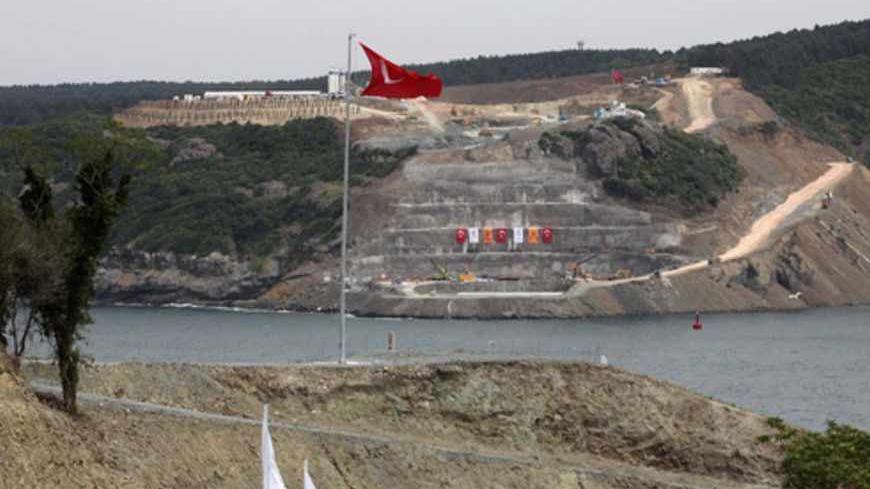 The construction site of the third Bosporus bridge is pictured during its opening ceremony on May 29, 2013, in Istanbul. - AFP PHOTO/MIRA

May 29, 2013, was the 560th anniversary of Istanbul’s conquest. One of Al-Monitor's contributors, Kadri Gursel, tweeted, “If you were a real Istanbulian, you would not be celebrating the city’s conquest.” While his tweet generated polarized reactions from all political fronts, another diplomatic pundit told Al-Monitor, “The Islamization of Istanbul is not yet complete, a la neo-Ottoman style.”

On Conquest Day, there were two other battles in this ever-growing city. The first was the beginning of the construction of the third bridge over the Bosporus. Second, a small recreational area, Gezi Park in Taksim district, was scheduled to be demolished to build a shopping strip. Both of these events may seem rather normal and not political to the unsuspecting eye, but not in Istanbul. Both of these “modernization” projects of the Justice and Development Party (AKP) have several religious and political battles embedded in them.

The third bridge has long been a contentious issue. Although everyone agrees Istanbul needs a better transportation system, there are multiple concerns about the cost-benefit analysis of how this third bridge was designed. The focus of this piece, however, is not about city planning details.

Going with the neo-Ottoman spirit, the bridge construction started on the anniversary of the conquest, and it was named after an Ottoman Sultan, Yavuz Sultan Selim or Selim the Grim, as he is mostly known in the West. As Al-Monitor contributor Tulin Daloglu explains in a piece dated Dec. 27, 2012, Selim the Grim is not a “favorite” sultan for Turkish Alevis. Hence, when Turkish President Abdullah Gul, announced the name of the new bridge, it created an uproar among some Turks. Those daring to openly criticize the government argued that it was offensive to use the name Selim the Grim for this bridge because Sultan Selim was known for the massacres of Alevis during his reign. Needless to say, many pro-AKP supporters promptly outlawed such a narrative and blamed “these foreign agents” for not knowing Ottoman history adequately. While Turkish Alevis claimed that this is offensive, many of the pro-AKP pundits were confident the name was a felicitous choice.

This is a rather mind-boggling approach, but it is taking deep roots in social media. A similar incident happened with the word “Nusayri.” Pro-AKP pundits would like to call Turkish Alawites "Aleviler" and the Syrian/Arab Alawites "Nusayris." If you bring up the argument that Syrian Alawites find the term offensive and they would rather be called Alawites, pro-government Turks respond, “It is not a pejorative term, there is nothing to be offended about.” This statement is followed by a long lecture on history. So it holds no significance that a term is offensive for the group it addresses as long as the majority in Turkey find it acceptable. You may try to establish the innocence of the word “negro” and how it evolved over time to hold offensive connotations, but your arguments would fall on deaf ears.

The second issue is about the Gezi Parki in Taksim, Istanbul. It is one of the few green areas left in the old city, Pera in Greek or Beyoglu in Turkish. The area is a must for any visitor. It is home to some of the most amazing buildings of 19th century Istanbul; several consulates, churches and temples are in this very congested part of town. These older buildings are the last remnants of a cosmopolitan Istanbul. The area has been going through tough times.

In the name of gentrification, many of the old buildings have been indiscriminately destroyed. One of them was a pastry shop, Inci Sweets Shop, and was one of the landmarks of modern Beyoglu. It was shut down in December 2012. Right next to it was a historic movie theater, Emek Cinema, which was shut down earlier in 2012, and was demolished in May 2013. Both buildings are to be destroyed to make room for malls. Gezi Park, in the vicinity of these two landmarks, is expected to be demolished as soon as possible. Turkish police had accompanied the bulldozers in a May 29 pre-dawn attack. Police are usually not necessary for construction projects, but in all three of these instances there were peaceful protests, hence the police presence. All three were met with quite a harsh police reaction, where pepper gas was liberally used and several of the protesters arrested. For Gezi Park, several protesters who camped overnight faced police brutality. Opposition parties, such as the Republican People’s Party (CHP) and Peace and Democracy Party (BDP) have also lent support to “occupy Gezi Park” groups.

Will the protesters be successful in the case of Gezi Park while they failed in that of the cinema and the pastry shop? It is not likely, because Prime Minister Recep Tayyip Erdogan has stated the decision is final, and the protests therefore are irrelevant. The prime minister then suggested the protesters should learn about the city’s and the park’s history. Erdogan added that during late Ottoman times, there were military barracks on that piece of land, and they intend to restore that history.

What is in a name, and what is in a few buildings being destroyed? Istanbul is experiencing a battle of visions; it is not the first, nor will be the last. This one comes with unilateral action, openly ignoring all “opponents” who dare to peacefully protest against reckless modernization projects or disregard of centuries of political sensitivities. Under what conditions is it halal to protest? If you are able to join the “democratic” majority in power and share their sensitivities, your protests will be supported by the state; if not, you will be promptly punished. Yet, a centuries-old lesson from Istanbul is that you cannot prevent the existence of factions in any society, you can only try to control their impact on the society.

Erdogan knows very well that these protests will not hurt his chances of re-election, therefore his government can choose names of places offensive to some of the population, destroy symbols precious for others. As long as there is no credible political power for the opposition and there is a fragile system of checks and balances, who can contain the neo-Ottoman president-to-be?