Street clashs rock Istanbul, Kurds await answers to their demands, Alevis, moderate secularists and urban youths are angry, and yet the AKP is defiant. 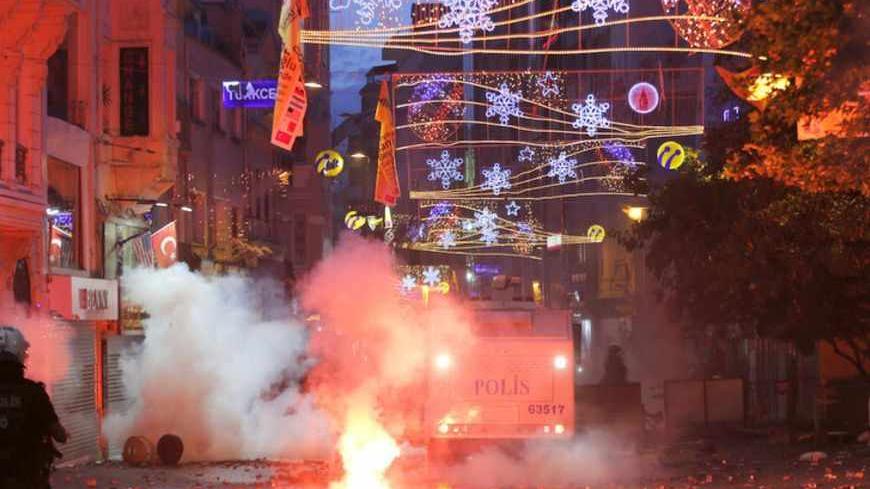 Riot police use tear gas to disperse the crowd during antigovernment protests at Taksim Square in central Istanbul, May 31, 2013. - REUTERS/Murad Sezer

Despite the astonishing, far-reaching changes that Turkey has undergone in recent years, thickening clouds of anxiety are hovering over the country.

The apprehension has little to do with the economy. The negative energy emanating from Syria has a partial impact. The jitters in public sentiment stem essentially from increasingly pronounced links between politics and religion, interventions in lifestyles and the negligence of the demands of various social groups.

All attention is focused on the decisive impact that Turkey’s Kurds will have on the country’s macro politics.

Let’s first lay out some observations on social unrest. Turkey’s economy has continued to grow and for its allies, the country remains a powerful element of regional stability. In terms of domestic politics, however, Turkey has entered a state of limbo as the 12-year-old government of the Justice and Development Party (AKP) balks at matching economic growth with political reform, creating a tactical-strategic confusion with distracting machinations and deviations into meandering paths.

Certainly, this has a lot to do with the lack of an alternative vision on the opposition side. But still a powerful, single-party government is supposed to be able to make determined and far-reaching steps.

There will be a way out of the limbo at the end of the day. But how?

The social unrest is concentrated in three main areas.

First, the shortcomings in “public diplomacy” and lack of transparency in the five-month-old Kurdish peace process has led to confusion and anger, especially among Turks. This sentiment has triggered street violence by small groups, but what is more important is that the “silent majority” feels deprived of adequate information about the process. Prime Minister Recep Tayyip Erdogan grasped that. When the bombings in the border town of Reyhanli raised fears of fanning a Sunni-Alevi conflict, he made a move to kill two birds with one stone. To distract attention, and make AKP’s Sunni conservative voters happy, his party passed a law restricting alcohol sales, and Erdogan went as far as to argue that “the commandments of religion cannot be disputed.”

Barring statistics on drunk drivers and the argument of “zero tolerance” for traffic violations, all other arguments used to justify the law — health, public order, alcoholism — have been absolutely unconvincing.

As a result, Turkey’s famously rational urban electorate, including the Sunnis, has come to perceive itself as the target of an insipid “lifestyle intervention.” The agenda has since been occupied by an issue supposed to be a non-issue.

There is more. A pompous groundbreaking ceremony was held this week to inaugurate the construction of a third bridge over the Bosporus in Istanbul, even though the environmental impact was not sufficiently debated. The prospective bridge was given the name of Sultan Selim The Grim, the cruelest adversary of Alevis and Shiites in Ottoman history. The conqueror of Egypt, the powerful sultan is known for the massacres of tens of thousands of Anatolian Alevis prior to and after his war against Iran.

The bridge might have well been named after Rumi, the great Sufi thinker who spread the teaching of universal tolerance from Anatolia, or any other Islamic humanist. It is not hard to guess how offending the choice of Selim’s name is for the Alevi community, about 10% of the population that is still awaiting an official acknowledgement of its religious identity and worship rights.

The great bridge is thus likely to become the symbol not of united continents and cultures but of painful collective memory.

The anxieties are not limited only to Alevis. A series of giant ongoing and planned construction projects in Istanbul ahead of local elections next year — like the new bridge — have united people of various political convictions and ages in a fresh opposition front.

In May alone, the authorities violently suppressed May Day demonstrations, hastily demolished a historically iconic movie theater to replace it with a shopping mall and gave a forceful go-ahead to controversial construction projects at nearby Taksim Square without proper public debate and discussion with civic society. The last straw came when they cut the trees in a park adjacent to the square.

The AKP government and local administrations have all the means to do whatever they please to century-old Istanbul, regardless of how the city’s fabric and environment are affected. But if they continue to step up the use of force against passive resistance, as happened in Taksim’s Gezi Park, the opposition could speedily emerge as a concrete alternative.

The contradiction is obvious: The AKP government continues to speak of reform and repeats promises to usher Turkey from the existing constitutional order, the legacy of a military regime, to a new democratic system, but in only a few weeks it has managed to create two opposition fronts against itself — the Alevi community and the urbanites, who include also moderate religious people.

If this polarization continues, the “reasonable consensus” required for a new constitution will become a distant fantasy.

The Kurds retain the most significant opposition dynamic in the country. Even though the pullout of  the PKK rebels continues free of controversy, the Kurds, who make up 18% of the population, feel themselves in a limbo as they grow impatient to see any major reform. Their demands for rights and freedoms are increasingly coalescing with the demands of Alevis and motley urban communities. The difference is in the transformation power of the political dynamic stemming from the Kurdish peace process.

One aspect of the social unrest and political uncertainty has to do with questions emerging over the AKP’s identity. The party is a powerful “social coalition” with a profile that goes beyond any Islamist identity, and has described itself as “Muslim Democrat” over the past five years. But during that same period, doubts have arisen over its “democrat” nature amid a slowdown in reforms, uncertainties in the Kurdish peace process and discriminatory rhetoric. And now the authoritarian and neo-liberal attitude displayed in major projects concerning Istanbul’s fabric, lifestyle and environment has given food for thought also to those who really know what “conservative” means.