With a series of moves such as the limitation of alcohol sales and a kissing ban, perceived as strong signs of social paternalism following the military tutelage, Turkey is being dragged into a refreshed Kulturkampf. 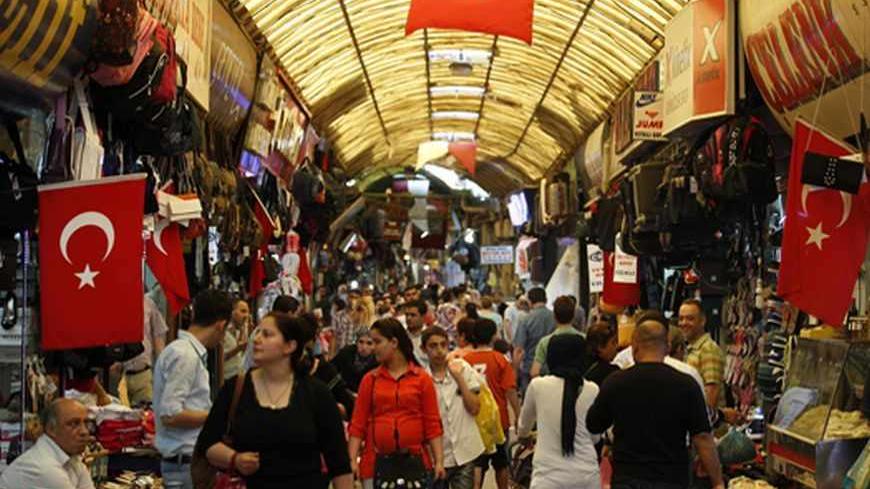 People shop in a shopping district in Hatay, May 17, 2013. - REUTERS/Umit Bektas

Political drifting and the lack of strategic vision on democratization is forcing the stitches of Turkey’s social fabric. Those stitches are hardly as strong as they are thought to be, no stronger than the commitment of social actors to democratization. Given the tensions along the Iran-Iraq-Syria belt, they are in fact as thin as a hair.

A series of developments that occurred in quick succession has sharpened social polarization in an equally short time: the restrictive law on alcohol sales and consumption that the government rushed through parliament, the “ban on kissing in public” resurrected suddenly by municipal authorities, the 14-month jail sentence for “insulting religious values” ruled against Turkish-Armenian intellectual Sevan Nisanyan, following a similar ruling against pianist Fazil Say, and the demolition of the iconic Emek Cinema amid violent street protests.

What really aggravates the situation is the fact that, barring some liberals, moderate religious intellectuals and politicians who claim to be the driving force of change in Turkey have overwhelmingly rationalized those developments or lent them support.

Two years ago, the botched air raid at Uludere that killed 34 Kurdish villagers was followed by a largely inconclusive attempt to ban abortion. Some claim the alcohol restrictions are now a similar move to alleviate pressure on the government over the Re yhanli incident. But this time, the situation seems different and can hardly be played down.

The law was passed in a patronizing manner. Demonstrators protesting the kissing ban came under attack by a mob shouting religious slogans. This has aroused attention to the arguments of those who see an inevitable despotism of the “moral majority” over Turkey’s complex social fabric. Some of those arguments seem quite convincing because the social reactions that go together with the excessively moralist moves are prone to violence and are quite ostracizing of the “other.”

Those who still believe that Turkey could consolidate a pluralist, peaceful and tolerant society open to different lifestyles are faced with a disheartening situation.

Two critical articles deserve attention. The first is “The AK Party’s Jihad Against Alcohol in Turkey” by my colleague Kadri Gursel, published by Al-Monitor. The second, “Not Islamism But Postmodern Authoritarianism” by political scientist Ihsan Dagi, was published in the daily Today’s Zaman.

Gursel argues that with the alcohol law, the ruling Justice and Development Party (AKP) not only aims to preserve its conservative electoral base, but is also pursuing a social engineering project to raise the profile of its own values and suppress the profile of others.

Dagi, meanwhile, highlights AKP efforts to install its values on top of a new “lifestyle hierarchy” in the social and cultural realm, but argues this cannot be necessarily called Islamism because of the use of democratic means. In his view, just like the Kemalists drew on a strong popular base and used legitimate means for social engineering along the lines of "Turkishness" and secularism, the AKP is copying the same method to build a new hierarchy; this can only be explained with the concept of post-modern authoritarianism.

The two writers share the observation of social engineering. Here lies the essence of the matter. While the Turkish opposition continues to suffer from “dwarfism” and the political asymmetry remains unchanged, the conservatives’ instinct to suppress “the other” is now surfacing more frequently.

The trap of populism has become more attractive for the AKP ahead of three critical elections and a possible constitutional referendum expected in 2014, and, notably, in the wake of the strategic regional “synchronization” with the White House, which effectively means also a blank check for arbitrary action in domestic politics.

In other words, Prime Minister Recep Tayyip Erdogan and the AKP will either steer the 12-year “Turkish Glasnost” era in the right direction, or Turkey will continue to be a semi-democracy under a hegemonic political power and in a tutelage system where the only change is the identity of the government that opts for the easy way of its own convenience and interests.

When the AKP came to power in 2002, it was a party with a distinct Islamic identity but blunted dogmatic roots which promised change. By 2006, it gained a post-Islamist identity thanks to courageous pragmatic, globalist and reformist policies. And in 2007, its defiance of the army’s e-memorandum raised the exciting question of whether the party would reach the “third phase,” that is, the phase of becoming “Muslim Democrats”?

In the five years since then, especially since the 2011 elections, the balance of economic growth and democratization has been upset. The deficit in freedoms and rights has grown. The lingering problems have not broken the popular demand for reform, but the “stranded” agenda has stoked populism. As much as the new constitution and thus the prospect of a strong national consensus was delayed, the goal of becoming Muslim Democrats fractured.

The question of reaching the third phase is crucial since this powerful party at the helm of a predominantly Muslim nation faces the test of “setting the reasonable democratic dose of religion in politics” via a constitution that guarantees respect for diverse identities.

The test is of global significance now that the world faces the challenge of the clash of civilizations.

Two existential problems in terms of democracy remain unresolved in Turkey: individual freedoms (free speech, lifestyle, etc.) and collective freedoms (ethnic, religious minorities, etc.). Neither of those areas has been stagnant but progress has always been slim and slack. The “others” — Alevis, Kurds, non-Muslims, homosexuals, pacifists, atheists and so on — are growing impatient in the "waiting room."

Other suffocating moves are likely to follow the alcohol bans, the kissing ban and the punishment of opinions deemed to offend religion and sacred values.

But one has to see all those controversies in the big picture to realize that the threats looming for Turkey are all essentially problems of democratization.

One thing is certain: No matter what you call it — be it Islamism, post-modern authoritarianism or high-handedness — this "Kulturkampf" will have no winner.

And that is the genuine source of concern.