It began with May Day demonstrations in Taksim Square that were suppressed by the government. A month later, and the protest has spread across Turkey. 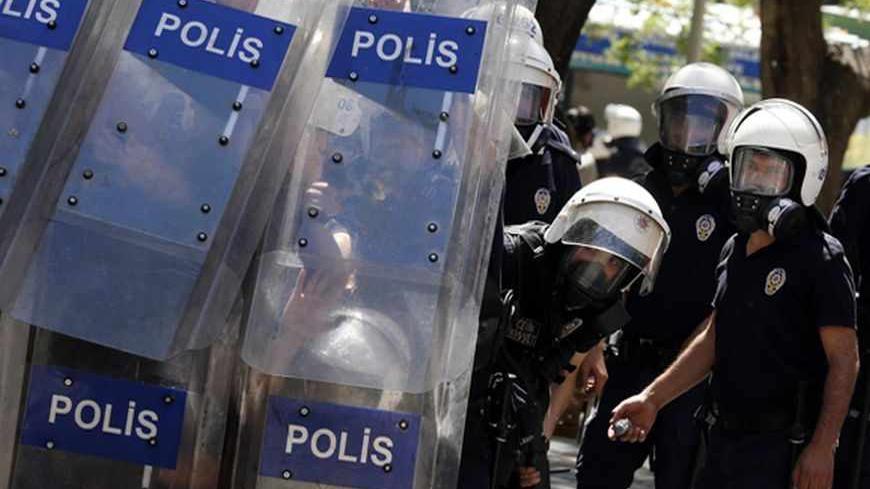 Riot police shelter behind their shields during clashes with demonstrators during a protest against Turkey's Prime Minister Tayyip Erdogan and his ruling Justice and Development Party (AKP) in central Ankara, June 1, 2013 - REUTERS/Umit Bektas

May 2013 will go down in Turkish history as a truly memorable chapter.

It began with the embittered clashes for Taksim Square which was closed by authorities to May 1 demonstrations on “safety grounds,” leading to scenes that left the main parts of the city covered in a blanket of pepper spray, and in destruction.

It ended with yet another battle, 30 days later, for the same square, people speaking more articulately this time. And a series of political repercussions on the way Turkey is managed by the willful rule of Erdogan himself.

Apparently during the month of May, a massive resentment has been brewing here, due to a series of statements and moves, based on what was perceived as Erdogan's attempts to micromanage and smother people’s lifestyles.

Yet, it was such a massive and spontaneous discharge of social energy that it caught everyone off guard. The street protests erupting some days ago in the Taksim district and its surroundings, as well as in Kadikoy on the Asian side of the Bosporus, with the uprooting of some trees in a park project, were staged by a very curious blend of Istanbul’s inhabitants whose fury targeted Turkey’s powerful and popular prime minister who has been ruling for over a decade.

Who filled the streets were predominantly the young — with a mixture of seculars, socialists, Marxists, Kemalists, anarchists, nationalists, Alevis and Kurds — who manifested high emotions and resolve against what they saw as an insufferably authoritarian way of managing affairs. Theirs was such an impulsive, “across the lines” action that all opposition parties remain busy trying to use it to their own gain.

But, much more than economy and politics, it was a remarkable urban uprising on the issues related to cultures and subcultures, and individual choices — an explosion that obviously was the most severe social warning ever from civilian society to Turkey’s unchallenged political power and its leader.

Understanding what has embittered the protesters' mood in the past few months will be helpful to understand their message. It has had to with Erdogan himself — as it is made clear from the slogans that it is he and not necessarily his party — who has sown the seeds of suspicion, rejection or fear. It has had to do with his never-ending pressure for families to have three children or more, to eat this type of bread and then the other. But, as his trademark micromanaging style developed, he entered areas which irked urbanites of various ages, as well as some mild pious segments — such as the voluntary-based Gulen movement.

Following up on the contentious “abortion ban” attempt, which he had to give up, Erdogan in mid-May hastily ordered that a bill restricting alcohol sales, ads and consumption passed, though there was no rational ground other than drunk driving, which could have been dealt with within the traffic law.

He further poured kerosene on the fire when he defended his move, by labeling it as “something that religion dictates us.” He said, apparently referring to the Sunni majority in Turkey, “We do not want to see our youth walking about high and drunk in the streets.” He went even further and said, “Go home and drink there,” addressing alcohol consumers.

Meanwhile, Ankara’s municipality issued an order to ban “public kissing” for couples on the subway. Young couples protesting by kissing were attacked by İslamist-nationalist mobs with machetes, chanting religious slogans and “You have no place to live here”-type of threats. Erdogan and the Justice and Development Party (AKP) did not act to stop these incidents.

Regarding the gigantic construction projects — such as a third airport; a huge seaport at the opening of the Golden Horn, a “channel” connecting the Black Sea and Marmara; a mammooth mosque at its highest hill, Camlica, which at best needs a symbolic statue; and so on — were perceived by Istanbul natives as imposed by sheer arrogance of the ruling party, without proper debate, let alone democratic participation. The Gezi Park project, which was the tipping point for protests, was aimed at creating a shopping mall.

Similar to all the inhabitants of the world’s metropolises, Istanbulites are sensitive of their living environment, and obviously accumulated all those small steps for an “enough is enough” moment. But, in essence, it is all about Turkey’s last decade which marks an enormous economic boom as well as “glasnost,” an opening of all its issues on which there was a lid. The so-called transformation, which has chosen the AKP as its carrier, was caused by the national desire to leave decades-long social and political engineering under military supervision. In the eyes of many, the social engineering to create a “uniformal society” under a strictly secular, Turkish identity has collapsed.

If any, the protests that began in Istanbul, and spread to other cities, is a loud manifestation of a desire to see an end to any social engineering, or a lifestyle format created in hierarchical order — a social identity, a majority, acting in a superior manner over the others in daily life. It is the core of the battle today, and the signs are that even a considerable portion of Turkey’s devout segments (which by way of Sufi tradition do not resent "others" consuming alcohol in their vicinity) oppose “Erdogan’s way” to damage diversity in equality.

So, in a nutshell, Istanbul’s uneasy crowds are telling Erdogan three things: “Be humble, reconcile and respect the ‘other.’” Theirs is a call for a political path on consensus seeking for him, not polarization. They say no to paternalism, making clear that the social groups are keen to defend their domains.

Will Erdogan reflect upon these messages? He has chosen to remain defiant, although he admitted there was wrongdoing by the police. He insisted that the projects of Taksim be continued, lashed out at the judiciary for suspending the park project and added, “We can assemble 1 million people where the opposition assembles 100,000,” raising eyebrows higher.

If his devoted voters fear that the AKP may lose the local elections in Istanbul, and even Erdogan’s prospects on becoming a president may have weakened after May 31, they may have a point.

Whatever the future may bring, Turkey has clearly entered a new political phase — that is for certain.