On the first anniversary of the Gezi revolt, the bottom line is that it failed to transform into a political movement, but did manage to transform Turkey. 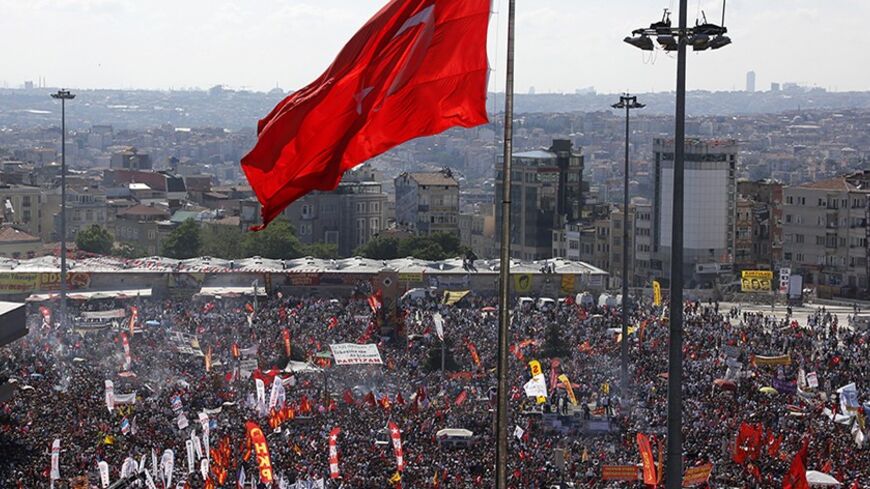 Istanbul’s bustling heart, Taksim Square, is hardly one of the world’s urban wonders, but in terms of political and historic significance it would definitely rank among the top. A political and public meeting point, it is Turkey’s modern-day agora. Political and social opposition groups are eager to raise their voices from Taksim and refuse to be barred from the square. Last but not least, Taksim is a powerful symbol of Republican Turkey.

Given the square’s significance, it would have been unthinkable for Prime Minister Recep Tayyip Erdogan to remain indifferent to it, especially at the zenith of his power. He wanted to transform it in an irreversible way. Moreover, he was bent on planning and managing the transformation unilaterally and even personally, feeling no need whatsoever to consult the city folk and seek their approval.

Istanbul’s people may have thrice elected the Justice and Development Party (AKP)'s Kadir Topbas as their mayor, but the city’s real boss is Erdogan, running the local administration all the way from Ankara.

Erdogan’s transformation plan was two-pronged. First, it was designed to move car traffic underground and make the square a pedestrian area. Second, it aimed to erect the new regime’s symbols on the square and in the meantime remove some of the structures and sites seen as unequivocal symbols of the old Republican regime.

The project’s most ambitious goal involved the demolition of Gezi Park, the only “urban forest” in Istanbul’s squares, and replacing it with a shopping mall, whose structure was to be a replica of an Ottoman barracks that had stood there until 1940. The Ataturk Culture Center, the only opera hall for the 14 million inhabitants of Istanbul, was to be demolished, too, though Erdogan said it would be replaced with a better one. Finally, a mosque was to be constructed on the square.

Following the banning of May Day celebrations at Taksim in 2013, the government had already said the square would be no longer open to political demonstrations. Closing the square to public meetings and demonstrations, a basic right enshrined in the constitution, was no doubt part of the “Taksim plan.”

In late May 2013, the cutting of trees in Gezi Park was imminent. On May 27, Taksim Solidarity — a civic society platform aiming to stop Erdogan’s plan — issued an appeal for action. About 100 activists heeded the call and launched a vigil in the park to save the trees. Bulldozers entered the park around midnight, but were fended off by the environmentalists. Calls were issued on social media, urging Istanbul residents to join the effort to stop the earthmovers and save Gezi Park.

May 27 marked the onset of an unprecedented phenomenon that would soon grow into the “Gezi resistance” and spill across Turkey in an enormous social explosion. Gezi’s climax came on June 1, when the resolve of thousands of protesters forced all uniformed police to withdraw from Taksim Square and its environs.

The Gezi resistance began as spontaneous, decentralized action by a new generation of well-educated urban youth seeking to protect its city and environment. Its message to Erdogan was, in short, “Don’t meddle in my life.” In a couple of days, the protests grew into a revolt that brought together almost all groups on the opposition spectrum — Alevis, Kemalists, Kurds, leftists, feminists, environmentalists, homosexuals, anarchists and “socialist Muslims.” What united them all was their indignation over the oppressive conservative policies of a one-man authoritarian regime and its leader’s contemptuous rhetoric vis-a-vis the opposition. Their fury was directed at a single person — Erdogan — rather than the governing AKP.

Now, on the first anniversary of the Gezi resistance, certain questions ought to be asked and answered. What is left behind from Gezi? What did Gezi change in Turkey? How did it affect Turkey’s image abroad?

A brief, general answer could be this: Gezi has not transformed into a political movement but has transformed Turkey and Turkish politics. As a libertarian movement, Gezi has achieved undeniable, measurable success. A year later, Gezi Park remains intact. The trees have been saved, at least for now.

As a second significant outcome, Erdogan’s international image has crashed irreparably with his irrational response to the Gezi protests. Today, the perception of Erdogan as a backward, Islamist autocrat hostile to the West and capitalism continues to spread. Erdogan’s claim that an “interest-rate lobby” plotted the Gezi resistance, his calls on supporters to stop using credit cards, his description of social media as a “scourge” and, most importantly, the unbridled force he unleashed to subdue the Gezi protesters have all contributed to undoing his image. The myth of Erdogan as an omnipotent leader vanished in thin air at Gezi Park. Erdogan today is internationally isolated.

The Gezi resistance came as a breaking point for the AKP government, marking the beginning of its descent from the zenith of power. The AKP’s “New Turkey” paradigm, too, collapsed at Gezi Park. Hence, Gezi was also an ideological debacle for the government.

Meanwhile, Gezi served as a successful test of the ability of Turkey’s opposition forces — both in and outside parliament — to unite around common values and take joint action for shared goals. Thus, the opposition front against Erdogan and the AKP government has expanded as opposition forces proved capable of connecting to each other.

On the other hand, divisions in Turkish society have sharpened further as Erdogan chose to weather the Gezi crisis through consolidating the AKP’s conservative Sunni base by stepping up his polarizing rhetoric and policies. Compared to a year ago, some segments of Turkish society are more polarized and estranged from each other today.

In another consequence, Turkey’s Alevi problem has grown bigger. It is no coincidence that the eight young people killed in police crackdowns on Gezi protesters across Turkey were all Alevis. Systematic ostracizing and discrimination by a Sunni Islamist government had made Alevis the angriest sector of Turkish society, and it's no wonder they joined the Gezi resistance en masse. The Alevis’ propensity to victimize themselves and their long-standing estrangement from the state has grown in the wake of the Gezi suppression.

In sum, Erdogan and his party remain strong a year after the Gezi revolt, but the Gezi spirit, too, remains alive and kicking in the streets.