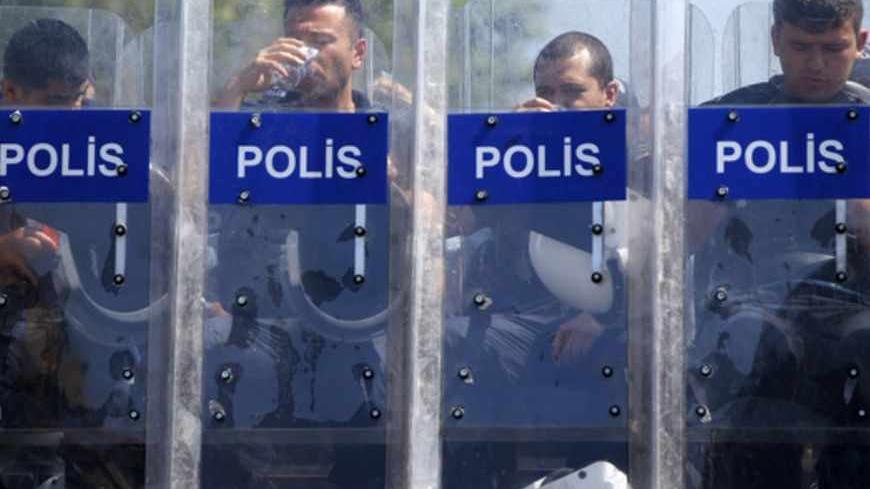 First, some questions to answer: What would have happened if the prime minister of the Turkish Republic, Recep Tayyip Erdogan, had not ordered the police under his authority to attack on May 31 a couple hundred activists protesting the cutting down of trees in Taksim Gezi Park to replace them with a building that would resemble an Ottoman military barracks?

If that attack had not taken place, could the international interest-rate lobby, American neo-cons, Israel, leftists, terrorists, main opposition CHP and the rest of the entire gamut of anti-Erdogan provocateurs, whom he and his supporters have been accusing, go out and mobilize hundreds of thousands of people in Istanbul and all over the country, make them take to the streets and clash with the police? Is there anyone with a sane mind who could answer these questions affirmatively?

Let’s go back to the beginning of the question, think again and ask the right questions. Prime Minister Erdogan had made a habit of suppressing street demonstrations that he sees as a problem — but which actually are a constitutional right — with the police force he commands. That is precisely what he did May 1, when he closed Taksim Square to labor unions.

Things went well until May 30. Erdogan could have mistakenly believed that having his police disperse protesting crowds with gas and night sticks was doing a good job. In fact, they were not solving the problems accumulating around them.

And then suddenly we saw that the methods that seemed to be working until May 30 totally crash on May 31 and cause a social explosion. It appears that we and others might have seen the futility of it, but sadly Erdogan did not. That must have been the case, because the prime minister of Turkey kept on doing what he thought was best.

The clashes that broke out on the night of May 31 and continued on June 1 became a true social explosion that spread to other cities of the country. That explosion couldn’t be contained and the government had no option but to order the police to clean out Taksim Square. The protestors occupied the square and erected barricades on the roads leading into it. But Erdogan went on doing what he thought was best.

Following is a short summary of the events of recent days, with Erdogan playing the lead role of provoking and polarizing.

If you can read this patiently, you may detect ‘’tactical intelligence” in the analysis of the series of events. But my suggestion to you would be to look for a “strategic approach.”

First, on May 31, the prime minister said he did not like a temporary injunction by a court stopping any work on the Artillery Barracks project.

On June 2, before he embarked on his Maghreb tour, he labeled the protestors in the square “capulcus” [street thugs, hoodlums], announced his intention to build a mosque in Taksim in addition to the Artillery Barracks and said he would raze the Opera building called Ataturk Cultural Center.

These words had a galvanizing effect on the protesters and those morally supporting them. In Erdogan’s absence, the tension in the country subdued somewhat. Reconciliatory statements made by President Abdullah Gul and Deputy Prime Minister Bulent Arinc — especially Arinc’s dialogue efforts with the protestors — played a major role in calming the situation.

But this didn’t last long. Prime Minister Erdogan on his return to the country on June 6 delivered a speech to thousands of his supporters who had come to the airport to welcome him that signaled his intention of pursuing a tough line. He continued with his remarks that heightened tensions between his supporters and the protestors.

For example, he kept repeating the claim — personally denied by the mosque’s muezzin — that the protesters who had sought refuge in Bezm-I Alem Valide Sultan Mosque at Dolmabahce while running away from the police had drunk alcoholic beverages in the mosque and had entered with their shoes. Also, his non-stop references to an incident when a group of activists had harassed a woman with a child because she was wearing a headscarf contributed to rising tensions.

Referring to bomb attacks in Reyhanli on May 11 that killed 53 people, he said ‘’our Sunni citizens were martyred." To emphasize that those killed were Sunnis only aimed at provoking the Sunni conservative segment that supports him.

On June 11, the police removed the barriers on the roads leading to Taksim Square. The clashes that ensued day and night between the police and the protestors and various radical factions in the square and its environs were covered live by international TV channels.

It was not yet time to evacuate Gezi Park. On June 14, Erdogan met with representatives of the civil society platform Taksim Solidarity, which has been struggling for a year against destruction of the Gezi Park and some artists. He told them that the government would respect the judiciary's temporary injunction and that even if the judiciary decides in favor of the government, they would still take the issue to a referendum. In the meantime, Gezi protestors decided to continue their protests symbolically in a single tent.

Erdogan, who had been for a while frequently hinting that he would get his own supporters into the streets to counter those at Taksim, organized his first personal mass rally under the banner of “Respect to National Will,” in Sincan, outside Ankara, with tens of thousands of his supporters.

Delivering his speech in Ankara, he referred to the rally he was organizing the next day, on June 16, in Istanbul’s Kazlicesme neighborhood on the shore of the Marmara Sea, and said: "Tomorrow we have our rally in Istanbul. I am talking bluntly. Either Taksim Square is evacuated or the security forces of this country know how to do it.’’

But immediately after the Ankara rally, without waiting for the next day or for protestors to dismantle their tents, the police launched a violent operation against Gezi Park, and the protestors were pushed out under heavy pepper gas barrages. Hundreds of people were detained and the clashes continued on June 16. As Erdogan was addressing a crowd of at least 150,000 at Kazlicesme, there were violent clashes between the police and demonstrators in many parts of Istanbul.

Yes, you can find traces of "tactical intelligence” in what you have read until now, but you can’t find a “political rationale."

Erdogan’s polarizing and escalatory tactics have destabilized Turkey, and where we are headed is nothing but chaos.

It is impossible for the mindset that has dragged Turkey into chaos with repeated wrong decisions and mistakes to now achieve a sustainable normal order.

There are some who are trying to interpret Erdogan’s actions within the rational boundaries of politics. That is futile.

Erdogan’s attitude, which produces instability with ever-expanding dimensions, can only be explained by a hubris syndrome that has overwhelmed common sense.

It is a psychological transformation to superiority complex, caused by a long-lasting, politically successful and powerful rule, that manifests itself with narcissism, irresponsible and arbitrary acts. Such leaders forever believe that they are the people of big issues and that they are the only ones who know the right thing to do under any circumstance, sometimes even thinking that they have been tasked by God. Under the influence of such misguided convictions, they totally ignore that they have exceeded the boundaries of public ethics.

The name of this psychological affliction is "hubris syndrome,” whose godfather is the member of the British House of Lords, David Owen, who in 2007 wrote the book, "The Hubris Syndrome."

The problem is the excessive growth of self-confidence in a leader, which accompanies his increasing sense of power and of not having worthy rivals. Once this point is reached, it means hubris syndrome has totally taken over. It wasn’t political rationale that made Erdogan declare at a June 11 meeting of his party’s parliamentary quorum, "They say the prime minister is causing tension, that the prime minister is too tough. … Excuse me, this Tayyip Erdogan won’t change."

Haunted leaders overwhelmed by hubris syndrome can drag their countries into disaster with their mistakes. The only power that can invite such leaders to common sense — and if they don’t comply, to overcome them — is the party and influential people in his close circles. But it is impossible to even speak of the existence of such a mechanism when it is Erdogan we are talking about.