Can Turkey still be a role model of democracy for Arab and Islamic countries? 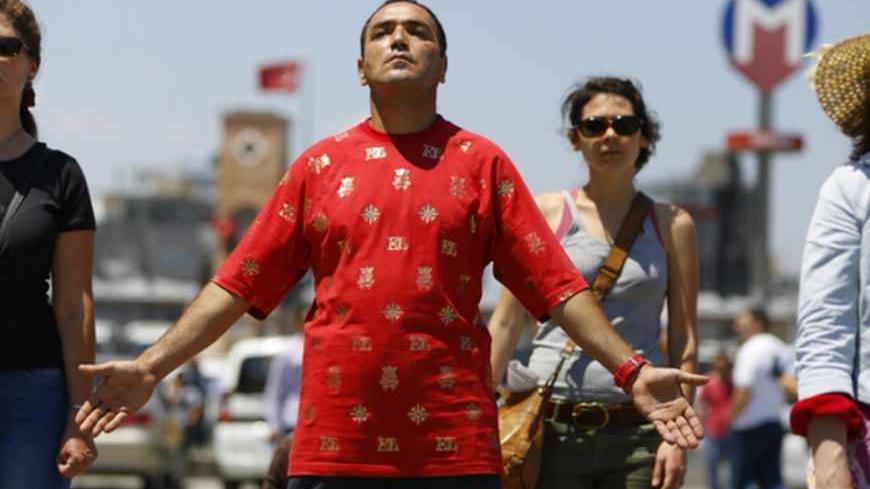 To the foreign journalists who have been coming to Istanbul for the past three weeks and asking me how the Gezi Park and Taksim Square issues are to be solved, I have always said the same things:

Since last weekend, we are no longer in a position to discuss Taksim resembling the Velvet Revolution or being Istanbul’s Tahrir. We are looking at, instead, "A la Turca Tiananmen.” I have to admit, sadly, that my concerns — my fears — have materialized.

On June 13, Prime Minister Recep Tayyip Erdogan held a five-hour meeting in Ankara with 11 people representing the Gezi Park resistance. The next day, he held two other meetings separately with civil-society movement Taksim Solidarity Platform, commonly accepted as the initiator of the Gezi Park actions, and a group of well-known actors and actresses who had given significant support to the Gezi Park protests. The meetings lasted until the early Saturday-morning hours.

Hopes that the resistance would end peacefully were boosted by the announcement of an accord on three major points. Moreover, the governor of Istanbul had practically become a dove, generously using his Twitter account to share soft reconciliatory messages with the youth and even meeting them on the seashore of Dolmabahce, below Taksim, to chat through the night. Turkey had never seen a public official so understanding and affectionate toward activists.

Erdogan gave assurances on three issues addressed in the accords reached in his talks:

Contrary to Erdogan’s hard-line statements, these three points were interpreted as the prime minister taking a step back. They could also be seen as his achievement of a win-win situation, as I wrote in my last Al-Monitor article.

As I know Erdogan’s mindset well, when I heard of the accord between him and civil-society representatives, I had a gut feeling of "too good to be true." I wasn’t sure that the Istanbul police force that was incredibly tough against the protestors on May 31 would suddenly become angels on June 15. In contrast to the accord, the first reaction from the resistance headquarters at Gezi Park was to continue with the resistance. I knew that the totally unbound structure of the Taksim Solidarity Platform, made up of about 120 groups and organizations, could not reach a consensus. I was aware that in that broad and vague structure there were leftist elements suffering from what I think of as "infantile disease" and that they could well influence the entire coalition. Nevertheless, when on the same day I heard that the most influential elements of the platform had applied their weight and the barricades at the park had been removed and all tents were to be dismantled and consolidated into one symbolic tent, I felt relieved.

But that wasn’t to last. Erdogan, who addressed a mass rally in Ankara, demanded immediate evacuation of the Gezi Park, warning that “We know how to do it." It didn’t take long for the police to launch an unprecedentedly savage pepper-gas attack.

The assault spread to a wide area around Taksim. The police chased the activists into hotels and gassed them there. The makeshift first-aid stations set up in the area were also raided, and doctors in scrubs were shackled and led away. Sea traffic between the European and Asian sides of Istanbul was halted. Thousands of people marching from the Asian side toward Taksim clashed with the police. Military forces were deployed under the Bosphorus Bridge.

Erdogan had declared that Taksim Square and Gezi Park belonged to the nation, and their occupation would not be allowed. On paper, what he said appeared logical. But as I write these lines, for the past 48 hours people have not been allowed to walk around Gezi Park, Taksim Square or on any street reaching them. They were all cordoned off by the police.

The governor of Istanbul said these measures were for the safety of citizens, but the safety he was offering was assured by banning access to the people. On a normal day, tens of thousands of people visit Gezi Park and Taksim. Especially at night, there were always jubilant shows in the area, with musical recitals and all forms of entertainment. Now they are under a tight curfew.

As all this was going on, Erdogan, in an Istanbul district far from the city center, organized a rally attended by about 300,000 people. To a flag-waving, cheering crowd he estimated at more than one million, and which was bussed to the location with public transport, he delivered an unbending speech that targeted everything and everybody, including the BBC, CNN International, other international media and the European parliament (which had expressed concerns over developments in Turkey), some major capital institutions of Turkey and, above all, social media. He promised that all these will be asked to account for their deeds.

It appears that Erdogan has managed to persuade a substantial number of his supporters that Turkey is facing an international conspiracy and that they should hit the streets in protest. A Turkish-style Islamic nationalism now reigns on the streets, where xenophobic sentiments are prevailing.

Turkey is not calm yet. Istanbul, Ankara and many other cities are shaken with protests every night. A labor confederation and civil-servant unions are on strike.

Erdogan has demonstrated that he will not tolerate any dissent in such an atmosphere, and believing that he is emerging as the victor, he is likely to stiffen his resolve.

For the first time, we are hearing concerns that the prime minister’s confrontational attitude could lead the country to civil war. These concerns are now finding their way into the media. If not a civil war, then perhaps a witch hunt by a prime minsister feeling insecure about his rule and who could therefore become tougher. Nobody can predict what that would entail, how wide the hunt would be and how long it would last.

No matter how hard Erdogan tries to preserve his power, it is Turkey that has lost in the crisis he mismanaged terribly by pouring fuel on the fire.

It is not likely that the EU will now see Erdogan as a trusted ally and a membership candidate. Similarly, it will be difficult for the US President Barack Obama to cite an increasingly authoritarian Erdogan as “model ally.” To portray Turkey and the United States in a "model partnership,” as Obama calls it, will expose Washington to criticism from many quarters.

Most importantly, can we now speak of a Turkey that can be shown to Arab and Islamic nations as a successful example of democracy? Can Turkey be the role model for so many countries?

The biggest loss for Turkey is the fact that these questions are now even being asked.