Nothing is predictable in the aftermath of the tempest at Istanbul’s Taksim Square. 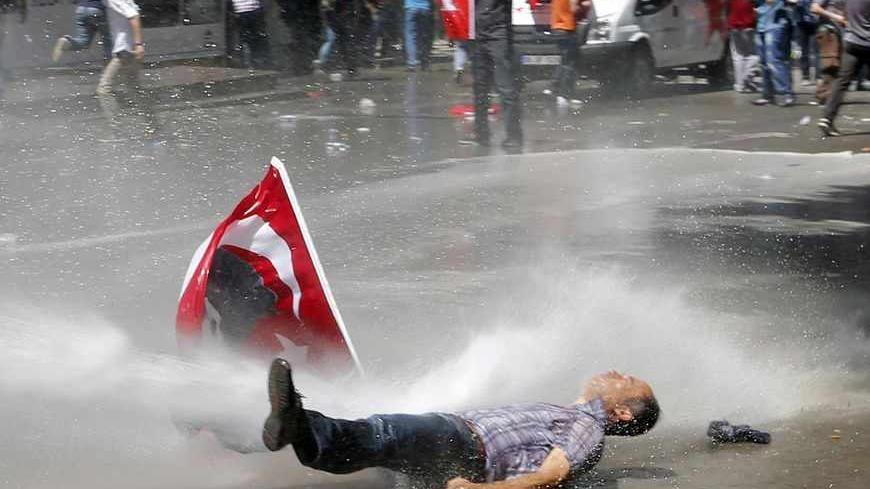 A man is hit by a jet of water as riot police use a water cannon to disperse demonstrators during a protest against Turkish Prime Minister Tayyip Erdogan and his ruling Justice and Development Party (AKP) in central Ankara, June 1, 2013. - REUTERS/Umit Bektas

ISTANBUL — I have been living in Istanbul for 40 years. I have never seen days like the last two in my city. I never thought I would be living through times like these.

I am writing these lines as a veteran of revolutionary situations and extraordinary days. Which one should I recall?  I am someone who was in East Berlin in November 1989 when the Berlin Wall came down and stayed on for days to live those momentous days; after Berlin, I was in beautiful Prague to experience the Velvet Revolution; in 1987 and 1988, I witnessed the Palestinian intifada in Jerusalem, and in other towns of the West Bank and Gaza; I was there during those memorable days of August 1991 when Boris Yeltsin stood up on a tank but the military coup collapsed, Gorbachev returned to the capital and the Soviet Union disintegrated. And, finally, in I was in Beirut during the week of March 2005 when the Syrians evacuated Lebanon.

I can easily double the list of events I've observed. If I add the events of May 31 and June 1 in Istanbul to my list, which category should I put it in?

It reminded me most Prague’s Velvet Revolution. For those who have some idea of Istanbul, let me tell you my meanderings: I approached the Taksim Square, the epicenter of Istanbul, from different directions. I approached the Taksim Gezi Park, the focal point of the protests, first via Istanbul Technical University’s historical Taskisla School of Architecture. Then I went down toward the sea and came up to Taksim via Gumussuyu. I went to the Dolmabahce sea shore, walked to now a booming avant-garde art scene of Tophane and climbed up the famed Italian Hill and reached Cihangir. That was the neighborhood among the key centers of popular resistance. This is where Turkey’s famous movie and soap opera stars, writers and bohemians live. I went down back to the seaside and climbed up to Galatasaray, Turkey’s historical Francophone lycee, and from there to the heart of old Istanbul, the Istiklal Caddesi [avenue], the renown Rue de Pera of Ottoman centuries, now in the hands of the protesters.

In this area groups of three, five or 20, men and women, were walking in all directions, sometimes quietly sometimes chanting slogans; some were heading to Taksim and some coming from there.

The most noticeable feature of these people: their youth. Generally they were men and women in their late 20s or early 30s. Their common accessory of their age group as everywhere else in the world was their backpacks; dressed in shorts, T-shirts and sneakers on their feet.

Another amazing sight were fans of Turkey’s top three most powerful and popular sports clubs — Fenerbahce, Galatasaray and Besiktas — who for a long time have not been allowed to watch football together because of stadium violence; this time they walked together, arm in arm, all wearing their team colors.

On the Asian side of Istanbul, they were not just watching what was happening on the other side. On the morning of June 1, thousands of them marched 20 km of Bagdad caddesi, considered to be the Champs Elysees of the Asian side, crossed the 1,700-meter suspension bridge that links the two continents and two parts of the city and began climbing towards Taksim. The ferryboats between two parts of the city were filled with people trying to get to Taksim.

All the roads leading to the Gezi Park at Taksim Square, where Prime Minister Recep Tayyip Erdogan’s ambition is to build a shopping mall, were under the police control. Erdogan’s obstinacy surely gave the impression that he wasn’t all that concerned with environmental issues.

Protesters, led particularly by artists, seem intent on not allowing the government to decide Gezi Park's fate a matter of honor. Future owners of the city, the youth of Istanbul were flowing to Taksim.

The sights of Istanbul resembled those of the Velvet Revolution when I lived at Prague — and of Beijing’s Tiananmen Square. Because of suffocating smells of  pepper gas clouds over Taksim, I couldn’t help to recall the 1989 June Fourth Incidents. I am wondering if the Taksim events will similarly be recorded in history.

Then I remembered Cairo’s Tahrir Square of January 2011. What Tiananmen means for Beijing and Tahrir means for Cairo, Taksim means for Istanbul. That's why, although there have been no losses of lives so far, the incidents that erupted with  brutal pepper gas attacks by police on a group of people who opposed the cutting of trees at Gezi Park, the incidents quickly lost relevance with the original grievance and shook the Erdogan government to the core like a massive earthquake.

So much so that, the previous two nights' incidents of Istanbul spread to 48 cities of Turkey where there were at least 90 separate protests. In London, Turks marched from Hyde Park to Trafalgar Square to express solidarity. All the Turks at Venice Biennale gathered at San Marco plaza to support Istanbul. We even heard from Toronto.

A very rarely seen solidarity of cities, country and even abroad was born. Certainly this couldn’t anymore be classified as  a protest action to save a few trees in Gezi Park. Such a widespread and energetic reaction was the manifestation of the accumulating anger against Erdogan.

It's not difficult diagnose why. Leave aside Erdogan’s charisma and his popularity that went beyond Turkish borders, his increasing conceit and arrogance especially over the past two years and his assault on democracy with pepper gas brought about a major popular explosion that started from Istanbul and spread nationwide.

In the first hours of July 2, the government had lost control of Istanbul, Ankara and Izmir, three big cities. We are now facing a unique sight of unguided popular masses, rather than a controlled popular movement, taking over the daily life of cities. In that sense, Istanbul is not Prague’s Velvet Revolution, not 1989 Tiananmen, not Beirut 2005 or 2011 Cairo. It's a situation without precedent and nobody knows how it will end.

My Al-Monitor colleague Amberin Zaman wrote: “Turkey is not on the brink of a revolution. A Turkish Spring is not afoot. Erdogan is no dictator. He is a democratically elected leader who has been acting in an increasingly undemocratic way. And as Erdogan himself acknowledged, his fate will be decided at the ballot box, not in the streets.”

Clearly, we can’t be sure of validity of any observations anymore. After these events, nothing — including even the fate of Erdogan — can be predictable.